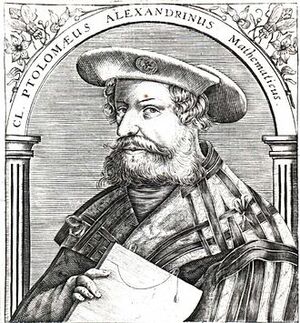 Claudius Ptolemy (90 AD - 168 AD) was an Egyptian astronomer, mathematician, and geographer of Greek descent who resided in Alexandria, Egypt, during the 2nd century AD. In several fields, his writings represent the culminating achievement of Greco-Roman science, particularly his geocentric (Earth-centred) model of the universe now known as the Ptolemaic system.

Ptolemy also wrote an influential work, Harmonics, on music theory and the mathematics of music. After criticizing the approaches of his predecessors, Ptolemy argued for basing musical intervals on mathematical ratios (in contrast to the followers of Aristoxenus and in agreement with the followers of Pythagoras), backed up by empirical observation (in contrast to the overly theoretical approach of the Pythagoreans). Ptolemy wrote about how musical notes could be translated into mathematical equations and vice versa in Harmonics. This is called Pythagorean tuning because it was first discovered by Pythagoras.

Other Ptolemy: Ptolemy I Soter

Ptolemaeus, surnamed Soter, the Preserver, but more commonly known as the Son of Lagus, a Macedonian of low birth. Ptolemy's mother, Arsinoe, had been a concubine of Philip of Macedon, for which reason it was generally believed that Ptolemy was the offspring of that king. Ptolemy was one of the earliest friends of Alexander before his accession to the throne, and accompanied him throughout his campaigns, being one of his most skilful generals and most intimate friends. On the division of the empire after Alexander's death, Ptolemy obtained the kingdom of Egypt, which he transmitted to his descendants. After a distinguished reign of thirty-eight years, he abdicated the throne to his youngest son, Ptolemy Philadelphus. He survived this event two years, and died B.C. 283. He was a liberal patron of literature and the arts, and wrote a history of the wars of Alexander, which is one of the chief authorities on which Arrian composed his narrative. For his beneficence, see Aelian (Varia Historia, xiii. 12). Not only Arrian, but Plutarch and Strabo, derived much information from Ptolemy's work, which is highly commended by Athenaeus.[1]