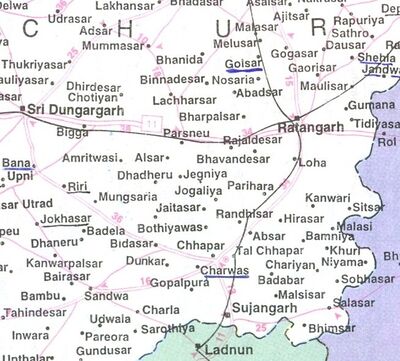 Map of Sujangarh in Churu district

Location and other coordinates

Rajiasar Chack is mainly dominated by the Jats. Some Gotras of the jats which reside in this village are Bhakar (now Bhaskar), Dudi, Bijarania, Muhal, and Jakhar.

According to Census-2011 information: With total 105 families residing, Chak Rajiyasar village has the population of 574 (of which 297 are males while 277 are females).[1]

Notable people in this village include: