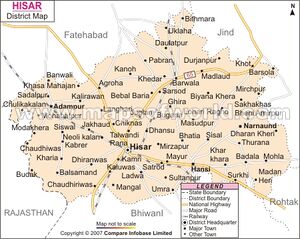 Kanwari (कंवारी), also spelled as 'Kunwari' or 'Kwari', is a village in Hansi Tehsil of Hissar District in Haryana State of India. It is site of Indus Valley Civilization.

It is situated 24km from Hissar city on Hissar to Tosham Road which leads to Bhiwani. 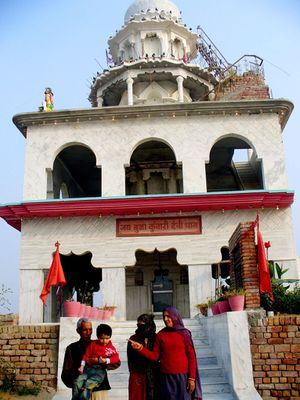 Kanwari is an ancient town, existing for hundreds of years during Tomar Rajput Kings, later under Slave Dynasty of Delhi, Mughals, Marathas, Jat Sikh rulers and eventually under British rule. After Independence, Kanwari became part of Punjab. Once Haryana was formed as a separate state on 1st November 1966, Kanwari became part of Haryana falling under Hissar District. Wikimapia link to Kanwari can be found here.

Kanwari has an old Shiva temple called 'Baba Siri Gir' and Akhara (abode) for sadhus (Hindu mystics) as well as a temple of village deity called 'Bua Kanwari' (Virgin Aunty Deity) where newly weds go for the blessings before entring the village. During recent renovation and expansion of Bua Kanwari temple, excavations were carried out during 2001-2003 and ancient stone statues of Hindu deities were found. These stone statues are yet to be carbon dated or examined by the trained archaeologists. Currently, these statues are stored in the basement under the temple.

Kanwari also has a Patwari (government land record officer) and ADO (Assistant Development Officer, for development of agricultural activities) based at kanwari.

There were a couple of Kumhar families who were converted to Islam during Mughal rules. After 1947 India-Pakistan partition these families were reconverted to and accepted into Hindu religion.

As per 2001 census, demographics of Kanwari villages are [2]:

Southwest of Kanwari is desert land and rest of the area surrounding kanwari is fertile plain land. Kanwari has three large ponds (Johad) e.g. Bada Johad (big pond), Jharna (Filter Pond) and Mundhala Johad. Fields of Kanwari are irrigated by the 'Sunder sub-Branch' extension of the 'Hansi-Butana Branch' of the Western Jamuna Canal.

Hisar has a continental climate, with very hot summers and relatively cool winters. Summer starts in April and lasts till the middle of October. May is the hottest month, with the maximum day temperatures in the 48 °C (118 °F) range. Hisar experiences a weak monsoon, from late June to September, with about 15 inches (380 mm) of rain. Winter starts in November and is mild and sunny, although temperatures may reach freezing on some nights. It is a semi-arid region and agriculture is supported mainly by canals and ground water irrigation. Hisar lies just 30 km north-east of the Thar Desert. Hot winds, locally known as Loo, are strong and frequent from May to July. Intermittent dust storms are also common. In the winter some rain is received due to western disturbances. The climate of the district is characterised by its dryness and extremes of temperature and scanty rainfall. The year may be divided into four seasons. The cold season from November to March is followed by the summer -season Which lasts up to the end of June. The period from July to about the mid of September is the south-west monsoon season. The latter half of September and October constitute the post monsoon or transitional period.

Kanwari is well connected by road. Kanwari lies 25km from Hissar to the North-East, 6km from Nalwa 15km from Tosham and 35km from Bhiwani to the South-West on Hissar-Tosham-Bhiwani road.

At Kanwari there is another link road that leads to Hansi - 25km. Kanwari is also connected to another village Badayan Jattan via a 4km link road.

Kanwari has a two government schools and a COllege of Education.

There is a Government Degree college at Nalwa (6km from Kanwari). There are many more educational institutes at Hissar - 24km.

Back to Indus Valley Civilization/Jat Villages