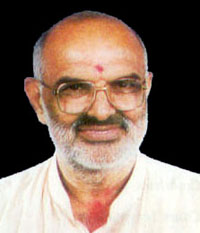 Dr. Sahib Singh Verma (1943-2007) was the former Chief Minister and Education Minister of Delhi. He was also the former Union Labour Minister of India. He was a veteran leader of Bhartiya Janata Party and has also served as Vice-President of BJP. He had been associated with Rashtriya Swayamsevak Sangh (RSS) from childhood. He became a Sangh swayamsevak in 1970. In 1986, he successfully did third Sangh Shiksha Varga. After completing his education he joined as lecturer in a Delhi College and later on became librarian.

Dr. Sahib Singh Verma has widely travelled in different parts of the world. He also served as a teacher at various times during 1974-99.

Dr Sahib Singh Verma was killed on Saturday dated 30-6-2007 in a road accident in Shahjahanpur in Rajasthan.

He was returning from Sikar in Rajasthan when the Tata Safari in which he was travelling collided with a truck on national highway 8. He had gone to village Ranasar near Neem Ka Thana to supervise work on an ideal village 'Vande Mataram', being built by Rashtriya Sawabhiman Sansthan, an organisation floated by him.