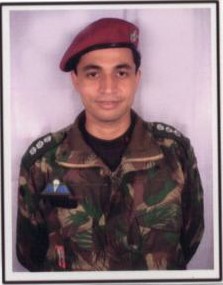 He was commissioned into the Special Forces in December 2001 after passing out from the Indian Military Academy. According to the sources "Skillfully tracking the movement of a group of terrorists for a month, he laid a trap in Gundpura village in Baramulla district on the night of 7 July 2004. As the terrorists were leaving the village in the early hours the next day, he sprang the ambush. In the firefight he personally killed two terrorists in the narrow bylanes of the village but in the process received three bullet injuries. Ignoring his injuries he motivated his troops to surround and prevent the third terrorist from escaping. Lobbing grenades and with tremendous effort he closed in on the third terrorist, killing him at close quarters. He, however, succumbed to his injuries, sacrificing his life in the best traditions of the Indian Army."

New Delhi, January 25: The Army’s Special Forces Captain Sajjan Singh Malik, who died while fighting terrorists in Jammu and Kashmir, has been awarded the Kirti Chakra while Athens Olympics silver medalist Rajyavardhan Singh Rathore has been awarded the country’s second highest defence award on the eve of the 56th Republic Day.

In the awards announced today, armed forces personnel have also been honoured with Uttam Yuddh Seva Medal and Yuddh Sena Medal. However, Capt Malik has been awarded the second most important gallantry award of the country given away from the battlefield. A Defence Ministry spokesman here said that Capt Malik has been awarded the Kirti Chakra (posthumously) for killing three terrorists in an encounter on the night of July 7 last year in Gundpura village of Baramulla district before falling to enemy fire.

The Rajasthan-born Capt Malik was commissioned into the Special Forces in December, 2001, soon after passing out of the Indian Military Academy.

Capt Malik had been tracking a group of terrorists for a month before the encounter and ambushed them while they were leaving Gundpura in the early hours of July 7. Two terrorists were killed in his own fire, but Capt Malik was hit by three bullets.

Ignoring injuries, he motivated his troops to surround a third terrorist and prevent him from escaping. Throwing grenades, he closed in on the terrorist and gunned him down from close range before falling to his injuries, the spokesman said.

“Capt Malik succumbed to his injuries, sacrificing his life in the best traditions of the Indian Army,” he said.

An alumnus of the National Defence Academy, Khadakvasla, Capt. Malik was a native of Rajgarh in Churu district of Rajasthan.