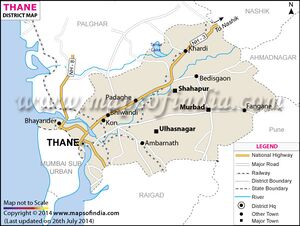 Sopara (सोपारा) was an ancient port town and the capital of the ancient Aparanta ("Western Border" - Northern Konkan) in western Maharashtra. In ancient times, it was the largest township on India's west coast, trading with Mesopotamia, Egypt, Cochin, Arabia and Eastern Africa.

The site of this ancient town is located near the present day Nala Sopara town in the Thane district, now in the newly created Palghar district of Maharashtra, India. Nala Sopara is one of the busiest western suburbs of Mumbai city.

The Mahabharata and the Puranas state that the Śūrpāraka was reclaimed from the sea for the dwelling place of Parashurama and it became a tirtha for this reason.[1] The finding of the relics in a stupa and the rock edicts (the fragments of the 8th and 9th major rock edicts) of Ashoka in 1882[2] prove the importance of this port town from the 3rd century BCE[3] to the 9th century CE.

Ptolemy mentioned this town as Soupara, and it was a major commercial centre during his time[5]

This Kanheri Caves establishment was connected with many trade centers, such as the ports of Sopara, Kalyan, Nasik, Paithan and Ujjain. Kanheri was a University center by the time the area was under the rule of the Mauryan and Kushan empires.[7]

According to the Jaina writers, Shripala, a mythical king married Tilakasundari, daughter of king Mahasena of Soparaka. Jinaprabhasuri (14th century) in his Vividhatirthakalpa mentioned Soparaka as one of 84 Jaina tirthas (sacred places). He also mentioned about an image of Rishabhadeva located in this city till his time.[8]

It has also been suggested that King Hiram of Tyre brought gold, precious stones and almug trees for Solomon from this city that was called land of Ophir.[9]

Nahapana(r. 119–124 CE) (नहपान) was an important ruler of the Western Kshatrapas, descendant of the Indo-Scythians, in northwestern India. He had a son-in-law named Ushavadata (Sanskrit: Rishabhadatta), whose inscriptions were incised in the Pandu-lena caves near Nasik. Ushavadata was son of Dinika and had married Dakshamitra, daughter of Nahapana.

According to the inscriptions, Ushavadata accomplished various charities and conquests on behalf of his father-in-law. He constructed rest-houses, gardens and tanks at Bharukachchha (Broach), Dashapura (Mandasor in Malva), Govardhana (near Nasik) and Shorparaga (Sopara in the Thana district). He also campaigned in the north under the orders of Nahapana to rescue the Uttamabhadras who had been attacked by the Malayas (Malavas). He excavated a cave (one of Pandavleni Caves) in the Trirashmi hill near Nasik and offered it to the Buddhist monks.[10]

Dr Naval Viyogi[11] tells that Findings of Stupa from Sopara, many caves, and inscriptions from western Maharashtra; recent findings of Ther of Usmanabad district (Diameter 85 feet) and remains of Baragaon stupa [12] , Pittalkhora [13] and Verul [14]; similarly findings of Pauni stupa and remains of its stockade from Bhandara district of Vidarbha and remains of stupa of Nagara etc, prove the effect of Buddhist religion on rich and poor both equally.

Dr Naval Viyogi[15] writes that the Broken inscriptions of Ashoka have been traced out from Sopara of district Thana and Devtek[16] of Chandrapur district. Similarly remains of Maha-stupas have been recovered from Kolhapur, Sopara, Kanheri and Pauni in Nagpur regions; Nagarā, In Usmanabad District etc. We get information, from the above sources, about spreading of Buddhist religion in Maharashtra, during the age of Ashoka.

Dr Naval Viyogi[17] further writes that Similarly we get some information about Punna and Arhat Ishidinna from Ther-gathas. Arhat Punna was a merchant of Sopara of Thana district. We read the name Sopara in Pali literature. Punna after getting consecration from Tathagata and after having full knowledge of Dhamma[18] (religion), came back to Sopara and after building a Vihara became absolutely busy in religious preaching of Buddhism.

In April 1882, Bhagvanlal Indraji, a noted archaeologist, numismatist and epigraphist excavated at the Burud Rajache Kot mound in Merdes village, near Sopara. The ruins of a Buddhist Stupa was found. From the center of the stupa (inside a brick built chamber) a large stone coffer was excavated which contained eight bronze images of Maitreya Buddha which belong to the c. 8th-9th century CE. This coffer also enclosed relic caskets of copper, silver, stone, crystal and gold, along with numerous gold flowers and fragments of a begging bowl. A silver coin of Gautamiputra Satakarni (Satvahana) was also found from the mound.

The Bombay Provincial Government presented the Sopara relics to the Asiatic Society of Bombay. The coins and the artifacts found during the excavations at the site of this ancient town can still be viewed in the The Asiatic Society, Mumbai museum. In an old Muslim graveyard near Ramkund, the fragments of 7th and 9th major rock edicts were found. These rock edicts can be viewed in the Chhatrapati Shivaji Maharaj Vastu Sangrahalaya, Mumbai.

During 1993 excavation, a ring well, fragments of Roman amphorae red polished ware and glass (all belong to the early centuries of the Common Era) were found.