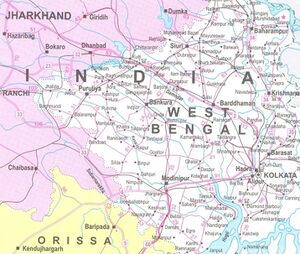 Susunia (सुसुनिया) is a village and hill in Bankura subdivision of Bankura District in West Bengal.

Susunia is a part of the Eastern Ghats and is situated at the north-western part of Bankura District. [1]

Susunia Hill is a known archeological and fossil site. Fossil remains of lion, giraffe, hyena and many other animal species have been discovered from areas around. The so claimed 'oldest' rock inscription of West Bengal is located here. There is an ancient carved monolith (Narasingha stone) standing at the point where the spring water is coming out of another stone gargoyle or curved projected spout. It is a good location for camping and rock-climbing. Susunia village itself is home to honoured master craftsmen of exquisite stone-carving. Susunia is an important archaeological site in Bankura district yielding stone age tools.[2] It is believed that there earlier was a fort built by King Chandravarman. Some 4th century inscriptions are there, referring to a place called Pushkarana, once the capital of Chandravarman. Modern-day Pakhanna is considered to be ancient Pushkarana.[3][4]

The dawn of early historical phase in Lower Ganga–Brahmaputra valley, comprising present West Bengal, Bangladesh and parts of Assam, is rather more obscure than it is in the Middle Ganga plains. The process began at least three hundred years later than that in the Mid–Ganga plains. The period therefore coincides rather with the rise of the Maurya rule, which probably extended to this region.

A continuity of settlements in certain sites hints at cultural evolution in the broad region we are discussing here, for example, at the two sites of Mangalkot and Pakhanna: At Mangalkot [5] in Katwa, Bardhaman (Burdwan District, cultural sequences spread from the Chalcolithic to the medieval times. Mangalkot is located on the banks of the Ajay river, a tributary of Bhagirathi. As such the Ajay–Kunoor rivers are significantly connected with the riverine communication network of eastern India. Brick structure comes from the Kushana period (1st - 3rd C. AD) onwards. More significantly, Mangalkot flares up into an urban settlement in the Sunga–Kushan phase. A continuity of cultural progress is not suggested here. However, the cluster of sites in the region, the rise of an urban node in this Radha region do signify a historical trend.

The cluster of sites that converge in the Radha region also include the Bankura sites, among whom, Pakhanna has been identified as having acquired urban dimensions along with Mangalkot. Situated near Susunia, on the south bank of Damodar river, Pakhanna witnessed the unfolding of chalcolithic village culture to urban culture of early historic period. B.D. Chattopadhyay has suggested that the pre–Gupta and early Gupta contexts in Pakhanna had a variety of antiquities, which may justify the site’s description as a modest urban centre in this temporal context. [6] These sites tell us about the possible transition of life from the simple village farming to trade–orientation and urbanity in some parts of the broad region of ancient Bengal.

Pakhanna village is considered to be the same as Pushkarana, once the capital of Chandravarman, son of Simhavarman, the extent of whose dominions may have been more or less coterminous with ancient Rarh region or south-west Bengal. It is the place mentioned in the Susunia inscription and dates back to 4th century AD.[7][8] According to the inscription on the Allahabad pillar Chandravarman was defeated by Samudragupta and the area became a part of the Gupta Empire.[9]

The Susunia Rock inscription,the earliest reference to the cult of Vaishnavism, is a short Sanskrit inscription in three lines engraved in Brahmi script on Susunia hill, recording the installation of an image of Vishnu during the reign of Chandravarman.

The first two lines of it incised below a big wheel (chakra) with flaming rib and hub, refer to it as the work of the illustrious Maharaja Chandravarman, the lord of Pushkarna....

The third line is incised to the right of the wheel, but its reading and consequently its meaning is not very clear. It certainly refers to the dedication (of the cave) to Chakrasvamin, which literally means the 'wielder of the discuss, i.e., Vishnu...It may be reasonably inferred that the excavated cave, on the wall of which the inscription was incised, was intended to be a temple of Vishnu. Suniti Chattapadhaya "holds that Puskarana mentioned in Susuniya inscription is the modern Pokarnya or Pakharna situated in Bankura District of which Candravarma was the king." (Prachin Vanger Puskarna-janapad - in Vangasri, 1339-40 B.S., 1932-33 A.D., pt. 1, p. 135-136).

On the rock face another script is visible, which is "Sankha Lipi (script)" from a period between 8th to 10th Century A.D. Till date this Sankha Lipi can not be deciphered. Many observe this not as script but symbols.

The Simhavarma of this list is counted by H P Sastri as identical with Simhavarma, with his son Chandravarma, as mentioned in the Susunia inscription, in which case Chandravarma becomes a brother of Naravarma.