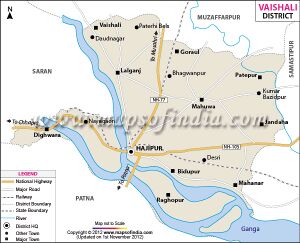 The name of this mahājanapada was derived from one of its ruling clans, the Vṛjis. The Vajji state is indicated to have been a republic. This clan is mentioned by Pāṇini, Chanakya and Xuanzang.[1]

V S Agarwal [6] writes that Panini takes Bhakti to denote loyalty of the citizen to the State either a kingdom or a republic. The Kashika mentions, as examples of this kind of Bhakti or loyalty, 1. Angaka, 2. Vangaka, 3. Sauhmaka, 4. Paundraka, 5. Madraka, 6. Vrijika.

V. S. Agrawala[7] writes that The Lichchhavis are said to have comprised 7707 rajans living in Vesali, and it is stated in Lilita-vistara that each one of them thought: I am King, I am King. Panini mentions that Vrijis, of whose confederation the Lichchhavis formed part. There is reference in the Jatakas to the Lichchhavi rulers consecrated to rulership by sprinkling sacred water on them (Jat. IV.148). A similar custom prevailed among the Andhaka-Vrishnis and other Sanghas.

V. S. Agrawala[8] writes that besides the Ayudhajivi Sanghas stated as such in the Ashtadhyayi, there were some other communities in Panini’s time, which as we know from other sources were republics. These include - Vriji (IV.2.131) - They are known as Vajji in the Buddhist literature and said to have included eight confederate clans of whom the Lichchhavis and the Videhas were the most important, both being described as republics in Buddha’s time.

The rulers of Vajji were a confederacy of the eight clans (atthakula) of whom the Vajjis, the Licchavis, the Jñatrikas and the Videhas were the most important. Manudeva was a famous king of the Licchavi who desired Amrapali after he saw her dance in Vaishali.[9]

The identities of the other four clans are not certain. However, in a passage of the Sutrakritanga, the Ugras, the Bhogas, the Kauravas and the Aikshvakas are associated with the Jñatris and Licchavis as the subjects of the same ruler and the members of the same assembly.[10]

Alexander Cunningham[11] writes that From Vaisali, Hwen Thsang proceeded to the north-east for 500 li, or 83 miles, to Fo-li-shi, or Vriji, which has already been identified as the territory of the powerful tribe of Wajji, or Vriji.

In the time of Buddha, the Vrijis were divided into several clans, as the Lichhavis, the Vaidehis, the Tirabhuktis, and others, whose names are unknown. The exact number of their clans would appear to have been eight, as criminals were arraigned before the atthakulaka,[12] or " eight clans," which would appear to have been a jury composed of one member from each of the separate divisions of the tribe. Hwen Thsang mentions that the people of the north called them San-fa-shi, or Samvajji, that is the "United Vajjis," — and the same name is referred to in the long and interesting account of the people of Wajji, which is given by Turnour from the Pali chronicles of Ceylon,[13] The great monarch Ajatasatru, of Magadha, wishing to subdue the " great and powerful people of Wajji", sent his minister to consult Buddha as to the best means of accomplishing his object. The Raja is informed that so long as the people of Wajji remained "united," they would be invincible. The Raja, by a stratagem of his minister, in the course of three years, so completely disunited their rulers, one from another, that no two would walk the same road together," and they were accordingly subdued without making any resistance. According to Turnour, " the union of the Wajjian states consisted of a confederation of chiefs."[14] The name of

[p.448]: Sam-vrlji, or the "United Vrijis," was therefore a descriptive title of the whole nation of eight clans, who, as Buddha remarked, were accustomed to hold frequent meetings, to act in concert, and to uphold the ancient Wajjian, institutions. No king is mentioned, but the people are stated to have respected and obeyed the orders of their elders.

According to Hwen Thsang the country of the Vrijis was long from east to west, and narrow from north to south.[15] This description corresponds exactly with the tract of country lying between the Gandak and Mahanadi rivers, which is 300 miles in length by 100 miles in breadth. Within these limits there are several ancient cities, some of which may possibly have been the capitals of the eight different clans of the Vrijis. Of these Vaisali, Kesariya, and Janakpur have already been noticed; the others are Navandgarh, Simrun, Darbanga, Puraniya, and Motihari. The last three are still inhabited and are well known ; but Simrun has been deserted for upwards of 550 years, while Navandgarh has probably been abandoned for at least fifteen centuries. Simrun has been described by Mr. Hodgson,[16] but its ruins still require to be carefully surveyed before we can form an opinion as to its probable antiquity. I visited Navandgarh my-self in 1862, and found it one of the oldest and most interesting places in northern India.

Navandgarh or Naonadgarh is a ruined fort from 250 to 300 feet square at top and 80 feet in height. It is situated close to the large village of Lauriya, 15 miles to the north-north-west of Bettiah and 10 miles

[p.449]: from the nearest point of the Gandak river.[17] The ancient remains consist of a handsome stone pillar, surmounted by a lion and inscribed with Asoka's edicts, and of three rows of earthen barrows or conical mounds of earth, of which two rows lie from north to south, and the third from east to west. Now the stupas usually met with are built either of stone or of brick ; but the earliest stupas were mere mounds of earth, of which these are the most remarkable specimens that I have seen. I believe that they are the sepulchral monuments of the early kings of the country prior to the rise of Buddhism, and that their date may be assumed as ranging from 600 to 1500 B.C. Every one of these barrows is called simply bhisu, or "mound," but the whole are said to have been the kots or fortified dwellings of the ministers and nobles of Raja Uttanpat, while the fort of Navandgarh was the king's own residence. The word stupa meant originally only a "mound of earth," and this is the meaning given to it by Colebrooke, in his translation of the ' Amara Kosha.' I believe that these earthen stupas or chaityas of Navandgarh must form part of those alluded to by Buddha himself in his sixth question addressed to Ananda about the people of Vriji:[18] " Anando ! hast thou heard that the Wajjians, what-ever the number may be of the Wajjian chetiyani belonging to the Wajjian (rulers), whether situated within or without (the city), they maintain, respect, reverence, and make offerings to them ; and that they keep up without diminution the ancient offerings, the ancient observances, and the ancient sacrifices righteously

[p.450]: made?" Now these chetiyani could not have been Buddhist stupas, as Buddha himself put the question during his lifetime. Accordingly, the author of the Ceylonese ' Atthakatha ' explains that they are yakhatthanani, or edifices belonging to Yakha, or demon worship. The Yakhas, in Sanskrit Yaksha and Jaksha, were the attendants of Kuvera, the God of Riches, and the guardians of his treasures, and their chief residence was called Alakapura. Now somewhere in the neighbourhood of the Gandak there was a city named Alakappo inhabited by a people named Balaya or Buluka, who obtained a share of Buddha's relics. It is probable, therefore, that this city of Alakappo may have been connected with the early Yaksha worship, and that the pre-Buddhistical stupas of Navandgarh may bo some of the ancient chaityas of the Vrijis that were referred to by Buddha. If so, the Balayas or Bulukas of Alakappo must have been one of the eight clans of the Vrijis, a conclusion which is rendered still more probable by the vicinity of Alakappo to the Gandak river.