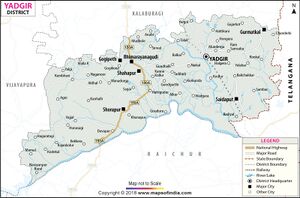 Yadgir (यादगिर) is a city and district in the Indian state of Karnataka. This district was carved out from the erstwhile Gulbarga district as the 30th district of Karnataka on 10 April 2010.

Yadgir: The fort at Yadgir was built by Feroz Shah Bahmani, but it is probable that this was also the site of a fort built by the Yadavas, or the rajas of Warangal. In Yadgir taluq again, there are many places of prehistoric interest.[1]

Yadgiri, popularly called as "Yadavagiri" by the local people, was once a capital of the Yadava Kingdom. It has a rich historical and cultural traditions. Yadavas, chose Yadgir to be their capital and ruled from here from 1347 to 1425 AD. Yadgir district has its deep roots in history. The famous dynasties of the south, the Satavahans, the Chalukyas of Badami, the Rastrkuta, Shahis, the Aidil shahis, the Nizam Shahis have ruled over the district.

In 1504 Yadgir (Gulbarga) was permanently annexed to Adil Shahi kingdom of Bijapur. In 1657 with the invasion of Mir Jumla it passed into the hands of Mughals. Later with the establishment of Asaf Jahi (Nizam) Dynasty of Hyderabad (1724–1948) Yadgir and Gulbarga came under it. In 1863 when Nizam Government formed Jillabandi, Surpur (Shorapur) became district headquarters, with nine Talukas of which Gulbarga was one of them. In 1873 Gulbarga was formed into Separate district with seven taluks. With reorganization of states in 1956 Gulbarga became Part of Karnataka State and Divisional headquarters. (Yadgiri is one of the taluka comes under Gulbarga district).

The Bahamani rulers built Gulbarga city with Palaces, Mosques, Gumbazs, Bazaars and other public buildings. There are five score large and small Marques and three score and ten Darghas in Gulbarga. The City is described as a "Garden of Gumbazs" So also number of Temples, churches and other religious centers are spread all over the city. (In Yadgir Yadava dynasty fort situated in middle of the hill.)

Inside the fort the Jumma Masjid, a noteworthy monument of Gulbarga is in well preserved condition. It is said that it resembles the famous mosque of ‘Cordova’ city in Spain. The Masjid measuring 216 ft. east-west and 176 ft north south covering an area of 38016 sq ft. Happens to be the only mosque in India, which is completely covered. Fergusson observes this "as one of the most remarkable of its class in India in some respect unique.

Two main rivers, Krishna River and Bhima River, and a few tributaries flow in this region.