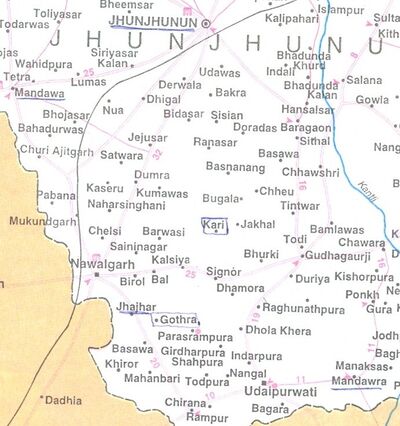 Location of villages around Jhunjhunu district in south

Abusar (आबूसर) is a town in tahsil and district Jhunjhunu of Rajasthan.

It is located 4 km west of Jhunjhunu on Jhunjhunu-Mandawa Road.

The village was founded by Chahar Jats who came from Charawas.[1] The people from this village write Abusaria as surname. 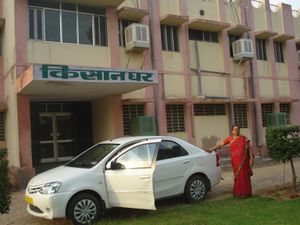 Local tradition tells us that Abusar gets name from a banjaran named Abalde. It is said that Abalde was passing thorough this place on a horse when a bag full of silver coins fell down. After she went a few kms from here she returned searching the bag and she found it here. She later constructed a well on that spot which is still preserved.

Main clan of the village Abusar is Khalia, who came from Goth-Manglod village about 300-400 years back. Khalias initially settled at place called Net Tibba in the village. Net (नेत) is their kuladevata. It is said that a wild animal locally called Ray frightened them by terrifying voice. Their priest suggested to install a statue of their kuladevata Net brought from village Hamiri. Khalias shifted down side of the Tiba.