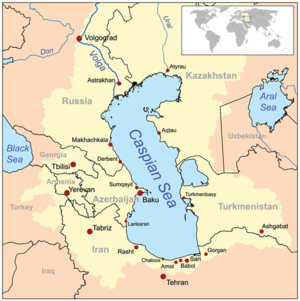 Araxes (अरेक्सिज) is a river in Central Asia. As per Arrian[1]The Araxes, or Aras, joins the Cyrus, or Kour, and falls into the Caspian Sea. It is now called Kizil-Ozan, or Yellow River. Its Hebrew name is Chabor. [2]

It flows along the countries of Turkey, Armenia, Azerbaijan, and Iran. It drains the south side of the Lesser Caucasus Mountains and then joins the Kur River which drains the north side of those mountains. Its total length is 1,072 kilometres and is one of the largest rivers of the Caucasus.

Variants of the name

The Aras rises near Erzurum in Turkey and meets with the Akhurian River southeast of Digor. From Digor it flows along the closed Turkish-Armenian border, and then runs close to the corridor that connects Turkey to Azerbaijan's Nakhchivan exclave. It then continues along the Iranian-Armenian and the Iranian-Azerbaijan border.[3]

The Zangmar, Sariso, Ghotour River, Hajilar River, Kalibar River, Ilghena River, Darreh River and Balha River are the major tributaries of the Aras from the South. In Turkey, the Ghareso river flows in from the North, and the Akhurian, Metsamor, Hrazdan, Azat, Vedi, Arpa, Vorotan, Voghdji and Meghri rivers join in from the Armenian (North) side. The Khachin River, Okhchi River, Kuri River and Kandlan River flow into the river from the Azerbaijan (North) side.[4]

In Armenian tradition, the river is named after Arast, a great-grandson of the legendary Armenian patriarch Haik.[5] The name was later Hellenized to Araxes and was applied to the Kura-Araxes culture, a prehistoric people who flourished in the valleys of the Kura and Aras. The river is also mentioned in the last chapter of the Aeneid VIII by Virgil, as "angry at the bridge," since the Romans built a bridge over it, so that it is thereby conquered. The river Aras has been associated with the biblical rivers Gihon and Pishon.[6] Robert H. Hewsen described Aras as the only "true river" of Armenia and as "Mother Araxes," a symbol of pride to the Armenian people.[7]

According to a legend cited by Strabo in ancient times Araxes river in Armenia had no outflow to Caspian sea but spread out in plains and created a lake without outflow.[8]

In Islamic times, the Araxes became known in Arabic parlance as al-Rass (not to be confused with modern-day Ar Rass) and in Perso-Turkish contexts as Aras.[9]

In modern history, the Aras gained significance as a geographic political boundary. Under the terms of the Treaty of Gulistan and the Treaty of Turkmenchay, the river was chosen as the border limit between the Russian Empire and Qajar Iran, as the latter was forced to cede its Caucasian territories to Russia.[10] Iran and the Soviet Union later built the Aras Dam on the Aras in the Poldasht area creating the Aras Reservoir. The Meghri Dam is under construction near the Armenian town of Meghri.[11]

Arrian[12] writes....Pasargadae was the ancient capital of Cyrus, but Persepolis was that of the later kings of Persia. The tomb of Cyrus has been discovered at Murghab; consequently Parsagadae was on the banks of the river Cyrus, N.E. of Persepolis. The latter city was at the junction of the Araxes and Medus. Its extensive ruins are called Chel-Minar, "the forty columns."

James Todd[13] writes that the origin of the Scythic nations, as related by Diodorus; when it will be observed the same legends were known to him which have been handed down by the Puranas and Abulghazi. The Scythians had their first abodes on the Araxes, The Arvarma of the Puranas , the Jaxartes or Sihun. The Puranas thus describe Sakadwipa or Scythia. Diodorus (Mb. ii.) makes the Hemodus the boundary between Saka-Scythia and India Proper.