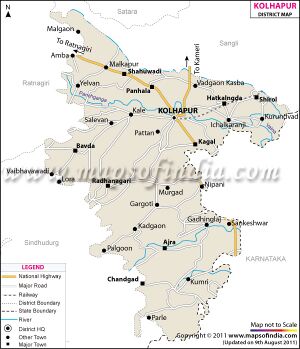 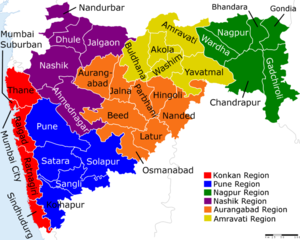 Kolhapur (कोल्हापुर) is a historic city and district of Maharashtra.

According to the myth, Kolhapur was named after the demon Kolhasura. There are different stories behind the reason he was killed by the Goddess, but it was his dying wish to name the place where he was killed after him. Thus, Kolhapur comes from the name Kolhasur and, Pur which means a city.[1]

Kolhapur is mentioned in the Devi Gita, the final and key chapter of the Devi-Bhagavata Purana, a special text of Shaktism. Kolhapur is noted as a place of Kollamma worship. In the text, Devi says,

"O King of Mountains! Still I am now telling something out of My affection to My Bhaktas. Hear. There is a great place of pilgrimage named Kollapura in the southern country. Here the Devi Ambabai always dwells."[2]

The famous Jyotiba temple is also located in the Kolhapur.

Kolhapur is famous in west Maharashtra for religious accounts.

Medieval era: The Shilahara family at Kolhapur was the latest of the three and was founded about the time of the downfall of the Rashtrakuta Empire. They ruled over southern Maharashtra; the modern districts of Satara, Kolhapur andBelagavi. Their family deity was the goddess Ambabai, whose blessing they claimed to have secured in their copperplate grants (Mahalakshmi-labdha-vara-prasada). Like their relatives of the northern branch of Konkan, the Shilaharas of Kolhapur claimed to be of the lineage of the Vidyadhara Jimutavahana. They carried the banner of golden Garuda. One of the many titles used by the Shilaharas was Tagarapuravaradhisvara, supreme sovereign ruler of Tagara.

The first capital of the Shilaharas was probably at Karad during the reign of Jatiga-II as known from their copper plate grant of Miraj and 'Vikramankadevacharita' of Bilhana. Hence sometimes they are referred as 'Shilaharas of Karad'. Later, although the capital was shifted to Kolhapur, some of their grants mention Valavada, and the hill fort of Pranalaka or Padmanala,(Panhala) as the places of royal residence. Even though the capital was shifted to Kolhapur, Karhad retained its significance during the Shilahara period. This branch rose to power the latter part of the Rashtrakuta rule and so, unlike the kings of the other two branches, those of this branch do not mention the genealogy of the Rashtrakutas even in their early grants. Later they acknowledged the suzerainty of the later Chalukya for some time. They had used Kannada as the official language as can seen from their inscriptions. This branch continued to hold the Southern Maharashtra from circa 940 to 1220.

From 940 to 1212 CE, Kolhapur was the centre of power of the Shilahara dynasty.[3] An inscription at Teradal states that the king Gonka (1020 - 1050 CE) was bitten by a snake then healed by a Jain monk. Gonka then built a temple to Lord Neminath, the twenty-second Jain tirthankara (enlightened being). Jain temples in and around Kolhapur from this era are called Gonka-Jinalya, after the king.

Around 1055 CE, during the reign of Bhoja I (Shilahara dynasty), a dynamic Acharya (spiritual guide) named Maghanandi (Kolapuriya), founded a religious institute at the Rupanarayana Jain temple (basadi). Maghanandi is also known as Siddhanta-chakravarti, that is, the great master of the scriptures. Kings and nobles of the Shilahara dynasty such as Gandaraditya I who succeeded Bhoja I, were disciples of Maghanandi.

Kolhapur was the site of intense confrontation between rulers of the Western Chalukya Empire and the rulers of the Chola empire, Rajadhiraja Chola and his younger brother Rajendra Chola II. In 1052 CE, following the Battle of Koppam, the victor, Rajendra Chola II, marched on to Kolhapur and there he erected a jayastambha (victory pillar).[4]

Between 1109 and 1178 CE, the Kopeshwar temple to Lord Shiva was built by the Shilahara kings, Gandaraditya Chola, Vijayaditya and Bhoja II in Khidrapur, Kolhapur.

Kolhapur State: The state of Kolhapur was established by Tarabai in 1707 because of the succession dispute over the Maratha kingship. The Maratha throne was then governed by descendents of Tarabai. One of the prominent Kings was Rajarshi Shahu Maharaj (Shahu of Kolhapur). In his reign he promoted cost free education to people of all casts and fought against untouchability. The state was annexed by the British in the 19th century. After India's independence in 1947, the Maharaja of Kolhapur acceded to the Dominion of India on 14 August 1947 and merged with Bombay State on 1 March 1949. Kolhapur is sometimes found spelled as Colapore.[5] Often, Kolhapur is also referred as Dakshin Kashi (Dakshin in Hindi means South, Kashi is a holy city in Northern India) due to its rich religious history.[6]