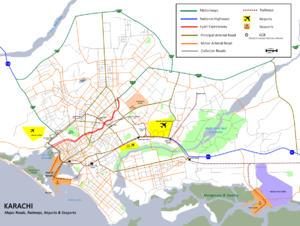 Map of Karachi and Manora

Debal (देबल) or Deybal ( ديبل) was an ancient port located near modern Karachi, Sindh, Pakistan. In Arabic, it was usually called Daybul (Dīwal ~ Dībal ديبل ) it is adjacent to the nearby Manora Island and was administered by Mansura, and later Thatta. Manora or Manoro (Sindhi: منهوڙو جزيرو/ ٻيٽ‎) (Urdu: جزیرہ منوڑا‎) is a small peninsula (2.5 km²) located just south of the Port of Karachi, Sindh, Pakistan.

According to modern archaeologists Debal was founded in the 1st century AD, and soon became the most important trading city in Sindh, the city was home to thousands of Sindhi Sailors including the Bawarij. Ibn Hawqal mentions huts of the city and the dry arid land surrounding the city that supported little agriculture, he mentions how efficiently the inhabitants of the city and how they maintained fishing vessels and trade. The Abbasids were the first to build large stone structures including a city wall and a citadel.

Debal and the Manora Island and was visited by Ottoman admiral Seydi Ali Reis and mentioned in his book Mir'ât ül Memâlik in 1554. In 1568 Debal was attacked by the Portuguese Admiral Fernão Mendes Pinto in an attempt to capture or destroy the Ottoman vessels anchored there. Fernão Mendes Pinto also claims that Sindhi Sailors joined the Ottoman Admiral Kurtoğlu Hızır Reis on his voyage to Aceh. Debal was also visited by the British travel writers such as Thomas Postans and Eliot, who is noted for his vivid account on the city of Thatta.

Bhambore (Sindhi: ڀنڀور ) are the ruins of this ancient port city.

[p. 297]: The position of the celebrated port of Debal, the emporium of the Indus during the middle ages, is still unsettled. By Abul Fazl and the later Muhammadan writers, Debal has been confounded with Thatha; but as Debal was no longer in existence when they wrote, I conclude that they were misled by the name of Debal Thatha, which is frequently applied to Thatha itself. Similarly, Brahmana, or Brahmanabad, was called Debal Kangra, and the famous seaport of Debal was named Debal Sindhi. But Diwal, or Debal, means simply a temple, and therefore Debal Sindhi means the temple at, or near, the town of Sindhi. Major Burton says that the shawls of Thatha are still called Shal-i-Debali, but this only proves that Debal was the place where the merchants procured the Thatha shawls. Just so the name of Multani-matti, that is Multan clay, or Armenian bole, is derived from the place where the merchants obtain the article, as the clay is actually found in the hills to the west of the Indus, beyond Dera Ghazi Khan. So also Indian-ink is named from India, where the merchants first obtained it, although, as is now well known, it is all manufactured in China. Sir Henry Elliot, who is the last inquirer into the geography of Sindh, places Debal at Karachi ; but admits that Lari-bandar "is the next most probable site after Karachi." 1 But I incline to the opinion of Mr. Crow, who was for many years the British resident in Sindh, that Debal occupied a site between Karachi and Thatha. His opinion is entitled to special weight, as he is

admitted by M'Murdo and Elliot to have " combined much, discrimination with ample opportunities of local inquiry." Sir Henry quotes the Chach-nama for the fact that "the Serandip vessels were in their distress driven to the shore of Debal," to show that the port must have been close to the sea. There they were attacked by pirates of the Tangamara tribe, who occupied the seacoast from Karachi to Lari-bandar. This statement shows that if Debal cannot be identified either with Karachi or with Lari-bandar, it must be looked for somewhere between them.

In favour of Karachi Sir Henry quotes Biladuri, who records that in the year A.H. 15, or A.D. 636, Hakim dispatched his brother Mughira on an expedition to the Bay of Debal. But as the city of Lyons is not on the shore of the Gulf of Lyons, so it does not necessarily follow that Debal was on the shore of the Bay of Debal. In fact it is described by Ibn Khordadbeh as being 2 parsangs from the mouth of the Mihran, which is still further extended to 2 days' journey by Masudi. 1 But as Debal was situated on the Indus, it cannot be identified with Karachi, which is on the seacoast beyond the mouth of the river. All our authorities agree in stating that it was on the west side of the Mihran, 2 that is of the main stream of the river, or Baghar, which flows past Lari-bandar, and discharges itself into the sea by several different mouths named the Piti, the Phundi, the Kyar, and the Pintiani. But M'Murdo also quotes the native

[p. 299]: authorities to show that it was on the Sagara branch of the Indus, which flowed past Bhambura. According to these accounts, Debal must have been situated on the western bank of the Baghar river, below the junction of the southern branch of the Ghara, or Sagara, branch. Its position may therefore be fixed approximately at the point of junction, which is 5 miles to the north of Lari-bandar, 17 miles to the south-west of Bhambura, and about 30 miles from the Piti and Pintiani mouths of the river. This position also fulfils the other condition quoted by Sir Henry Elliot, that Debal was between Karachi and Lari Bandar, in the territory of the Tangamara tribe of pirates. It further agrees with the position assigned to it by Mr. Crow, who places it between Karachi and Thatha, which is an exact description of the locality following the course of the river, which is the only course that can be taken, as Debal was situated amongst the intersecting streams of the Delta.

Unfortunately, this part of the Delta has not yet been minutely explored ; and to this cause I would attribute our ignorance of the remains of an ancient city, which were noticed by Ibn Batuta in A.D. 1333 in the very position which I have assigned to Debal. 1 As his statement is of great importance, I will quote the passage at full length: — "I then proceeded by the Sind to the city of Lahari, which is situated upon the, shores of the Indian Sea, where the Sind joins it. It has a large harbour, into which ships from Persia, Yemen, and other places put. At a few miles from this city are the ruins of another, in which stones in the shape of men and beasts almost innumerable are

[p. 300]: to be found. The people of this place think that it is the opinion of their historians that there was a city formerly in this place, the greater part of the inhabitants of which were so base that God transformed them, their beasts, their herbs, even to the very seeds, into stones ; and indeed stones in the shape of seeds are here almost innumerable." This large ruined city, with its stones in the shape of men and beasts, I take to be the remains of the once great emporium of Debal. According to M'Murdo, the people of Debal moved to Lari-bandar, 1 and according to Captain Hamilton, Lari-bandar possessed "a large stone fort," for the protection of merchants against the Biluchis and Makranis. It is, I think, a very fair and legitimate deduction that the people who deserted Debal removed the materials of their old city for the construction of the new one, and therefore that the stones of the fort of Lari-bandar were brought from the deserted city of Debal, the remains of which excited the curiosity of Ibn Batuta in A.D. 1333.

This statement of Ibn Batuta I would connect with the curious account of an Indian city in the ' Arabian Nights,' which is found in the story of Zobeide. According to the common edition, this lady sailed from the port of Bassora, and after twenty days anchored in the harbour of a large city in India, where on landing she found that the king and queen and all the people had been turned into stone. One person only had escaped the general transformation, and he was the king's son, who had been brought up as a Muhammadan by his nurse, who was a Musalmani slave. Now this legend appears to be the same as that of

[p. 301]: Raja Dilu and his brother Chota of the native histories of Sindh, 1 according to which Chota had become a Muhammadan, and when the city of Brahmana was destroyed by an earthquake, on account of the wickedness of the king, Chota alone escaped. As a similar story is told of the ruin of all the chief cities in the Panjab as well as in Sindh, the scene of the story in the ' Arabian Nights ' may be fairly placed in Sindh ; and as Debal was the only large city on the coast, and was besides the chief mart to which the Muhammadan merchants traded, it seems to me almost certain that it must be the Indian city in which Zobeide found all the people turned into stone.

According to M'Murdo, the destruction of Brahmana took place in A.H. 140, or A.D. 757, and as the story of Zobeide is laid in the time of the Khalif Harun-ul-Rashid, who reigned from A.D. 786 to 809, there are no difficulties of chronology to interfere with the identification of the two legends.

The position of Debal may also be fixed on the Baghar river, or main channel of the Indus, by its name of Dibal Sindhi, or Dibal on the Indus. That it was near Lari-bandar we learn incidentally from Captain Hamilton,! who says that the river of Sindhi " is only a small branch of the Indus, which appellation is now lost in this country which it so plentifully waters, and is called Divellee, or Seven mouths." This statement shows that the branch of the Indus leading up to Lari-bandar was called Dibali, or the river of Dibal, so late as A.D. 1699, when visited by Hamilton. That

[p. 302]: this was the Piti branch of the Indus I infer from its other name of Sindhi, which I take to be the same as the Sinthon Ostium of Ptolemy, or the second mouth of the river, reckoning from the west. As the Piti is one of the mouths of the Baghar river, this position agrees with that which I have already assigned to Dibal, on the concurring testimony of all the previous authorities.

Since Hamilton wrote, Lari-bandar itself has been deserted, and the present port of the western half of the Delta is Dharaja, which is only a few miles to the east of Lari-bandar.

In the seventh century the Chinese traveler Hieun Tsang witnessed their (Jats) settlement along the flat marshy lowlands which streches to some thousand li. [2] Ibn Hauqual mentions the area of their abode in between Mansura and Makran. [3] By the end of seventh century, Jats were thickly populated in Deybal region. [4] In the early eighth century, when the Arab commander Muhammad bin Qasim came to Sind, the Jats were living along both sides of the river Indus. Their main population was settled in the lower Sind, especially in the region of Brahmanabad (Mansura); Lohana (round the Brahmanabad) with their two territories Lakha, to the west of Lohana and Samma, to the south of Lohana; Nerun (modern Hyderabad); Dahlilah; Roar and Deybal.