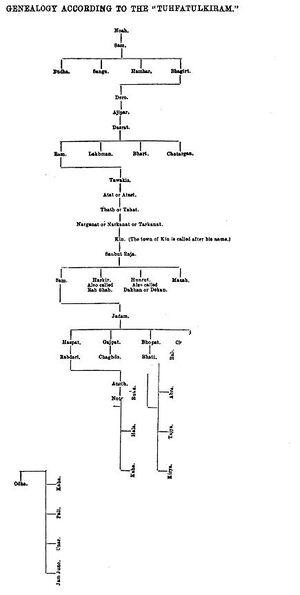 Samma (Hindi: सम्मा, Sindhi: سمو, Urdu: سما) is a Muslim Jat clan found in Pakistan. Samma are a Baloch tribe settled in the provinces of Sindh, Balochistan and Punjab of Pakistan. They are part of the larger Jamot tribe and speak the Sindhi, Balochi, and Seraiki. Jam (Urdu: جام) means Sardar, Nawab or King. It is not a tribe, but the title given to the leading Royal family of a Jamot tribe or state.

There are various theories about the origins of Samma tribe.

Between 1351-1551 C.E. the Samma Dynasty ruled in Sindh and parts of Punjab region and Balochistan, with their capital at Thatta. The most famous of these rulers was Jam Nizamuddin. The Samma dynasty left its mark in Sindh and Balochistan by building magnificent structures including the necropolis of kings and royalties in Thatta and many more ruins.

Bhim Singh Dahiya [1] mentions that After these successive defeats came the campaigns of Mohd.Bin Kasim who succeeded where others had failed and in his success the share of the local population of Buddhist Jats and Mers was significant. Too much oppression breeds revolt and disloyalty.

However, after the conquerors' first acquisition, we find that the Arabs were also indifferent about retaining the goodwill of their allies. They imposed the same conditions upon the Jats as were imposed by the earlier Brahmana rulers. 51 The result was the same. When these insults also crossed the limits of tolerance, the Sumra or Samra clan of the Jats overthrown the Muslims and re-established their kingdoms. These Samra are still existing and according to Ain-i-Akbari 52 36 kings of Sumra clan ruled for 500 years when they were superseded by another Jat clan, the Sammas. Another authority mentions the period as 550 years.53 At first they were nominal tributaries to the Abbasid Khaliphs and enjoyed full independence in internal affairs. In 1351 A.D. the Sammas obtained power, thus ending the rule of Sumras. But in 1521 A.D. the Sammas were themselves driven out from power. The Sammas used to take the title of Jam and in later period many Sammas as well as Sumras became Muslims and their genealogy was concocted (in the manner of Rajput genealogy), connecting them with Hazrat Mohd. and others from Arabia. But Tarikh-i-Tahiri expressly mentions them as Hindus.

49. See Note III at the end of this section.

According to 1911 census the Samma were the principal Muslim Jat clan in Bahawalpur State with population of Samma (1,072) . [3]