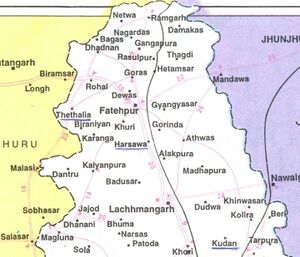 Location of Dhandhan in Sikar district

Dhandhan (ढांढण) is a large village in Fatehpur tahsil of Sikar district in Rajasthan.

Jat Gotras with no of families are:

Dhandhan is known for Temple of Sati Mata. The History behind the temple is that in 15th century the elders of Bajaj’s & Bhartiya’s [Bansal Gotra] used to reside in Siswal town, Hisar District in the State of Haryana. The eldest person was “Balchand ji”. He was a very honest and holy minded person. His wife was Purni Devi who was a very devoted lady. Bholanath ji all of a sudden expired while feeding the cows in the forest. Both sisters and others in the family got very disturbed on hearing the news of his sudden and unexpected death. Both the sisters just could not bear this news and got very desperate and they informed everyone in the society that they will give their lives along with their dead brother. Everyone just failed to move them from their determination and finally they had to agree that the sisters will give their lives along with their dead brother and sit on the pyre. In their memory a beautiful “Mand” was prepared by the people and lacs and lacs of devtotees started coming there for worshipping.

Around Year 1655, in the State of Punjab because of the terror of Muslims all Bajaj – Bhartiyas migrated to Fatehpur Shekhawati. Those elders who made Fatehpur their native place were Basantlal ji Bajaj, his father was Mukundlal ji Bajaj. The second brother’s name was Jiwraj ji and his father was Pitharam ji and the third brother’s name was Mansingh ji Bhartiya. In spite of every one being settled in Fatehpur, for worshipping and for all religious and good work and for Bhadav Amasya they had to go all the way to Siswal to get the blessings of Shri Sati Dadi ji. The route from Fatehpur to Siswal was very tiresome and everyone had to face lots of trouble. Hence, all the devotees prayed to Shri Sati Dadi ji that if Shri Sati Dadi ji accept the request of all devotees and come to Fatehpur, then all the devotees will be free from the trouble of coming from Fatehpur to Siswal every time. Shri Sati Dadi ji accepeted the request and directed the devotees that they may lift 6 bricks from the Mand and that the bricks should not be kept elsewhere in the route but taken straight to Fatehpur. The devotees readily and happily took out 6 bricks and carried on their head to Fatehpur. But while traveling on their way, they felt the pressure and wanted to go to toiled and forgetfully kept the bricks in the forest of “Dhandhan” and got rid of their pressure. Thereafter when they tried to lift the bricks again it was impossible for them to move the bricks, what to talk about lifting them. The bricks became so solid that they applied their full energy but could not even move the bricks. Suddenly they remembered the direction of Shri Sati Dadi ji that they were not supposed to keep the bricks any where during their way to Fatehpur. Hence, this gave birth to the holy town Dhandhan and it has since then become “Dhandhan Dham” and every year lacs and lacs of devotees go to Dhandhan to get the blessings of Shri Sati Dadi ji on different occasions and to get their wishes fulfilled.[1] 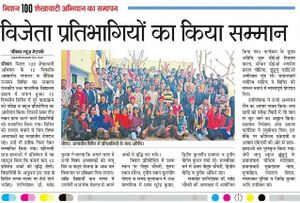