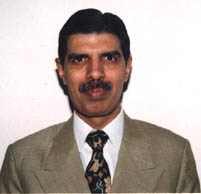 He was born on 09 September 1954 at Bhojasar village in Jhunjhunu district, Rajasthan in the family of Shri Rameshwar Singh Meel (Retired IAS). He married with Smt Sarita Jhinjha from village Hanumangarh Town in Rajasthan. He has got two daughters Dr. Sheetu Singh and Dr. Nishtha Singh.

He was former Superintendent and senior professor and incharge of division of Allergy and pulmonary medicine at SMS Hospital Jaipur. During his medical service he created many distinctions. He invented instruments which helped in treatment of asthmatic patients, made important discoveries considered significant at international level and established Indian Asthma Care Society (IACS) in 1986 to help asthmatic patients and launched a crusade against tobacco in Rajathan. Lacs of asthmatic patients have been benefited from his innovative treatment throughout his career. He is a social reformer. Following is brief summary of some of his achievements.

Dr. Virendra Singh invented three instruments that have immense utility in cure of respiratory patients. Government of India awarded patent of invention to these instruments ((Invention Patent No. 160580/86, 160764/86 and164780/87)). He invented Pink city flow meter to measure severity of asthma and smoking induced lung disease emphysema. It helped in diagnosis and treatment of asthma and other respiratory diseases, popularly it is nick named as thermometer of asthma. National Research Development Corporation (NRDC) of the Government of India awarded the Independence Day Award,(Rs 50,000/) the highest award given for the best invention in the country, to Pink City Flow Meter in 1989. (Published in: Invention Intelligence: Jan 1991:35-37). Pink city lung exerciser was his second invention. It is an equipment to perform lung exercises. It is based on principles of pranayama. Regular use has been shown to cure asthma and other respiratory diseases. National Academy of Medical Science graded it the best bio-engineering work in the country for year 1990-91, and awarded the S S Memorial award. (Published in: Am Review Resp Disease 1990;141:A24, J Asthma 1987;24:355-59). Hydration attachment to lung exerciser was his third invention. When used with a Lung Exerciser this invention relieves symptoms and improves lung functions in asthmatic patients. (Published in: J Asthma 1987;24:355-59).

He made couple of original discoveries which have been acknowledged by leading international scientists. He discovered a nervous reflex relating patency of nostrils. When we breathe, only one nostril is patent while the other nostril remains blocked. Though this phenomenon was known since long but its mechanism was not known. Dr. Virendra Singh discovered a nervous reflex to explain the mechanism of this phenomenon. The results of experiment were considered very significant at international level and therefore published in the leading international journal of physiology (J Appl. Physiology 1987:62:91-94). This discovery was among the best discovery and therefore included and appreciated in the year book of pulmonary medicine. (Year book of Pulmonary Diseases 1988-PP 34-35).He also evolved a hypothesis relating Asthma and gastro esophageal reflux (GER) or acidity. These are closely linked but the mechanism was poorly understood. Dr Singh discovered an interesting hypothesis to explain the relationship of asthma and GER. It was thought that GER triggers asthma in patients. However, his experimentation showed a reverse relationship. He showed that medicines providing relief in asthma also improves GER. His findings were published in the leading international journal of asthma as original article (J. Asthma 1983; 20:241-43). This hypothesis was proved in the subsequent Western studies. The hypothesis was considered a landmark discovery and was discussed in the editorials of the top international journals with commendable remarks (editorials of J. Asthma 1983;20:237-38 and Am Rev Respir Dis 1990;141:1391-92). It was also quoted in Respiratory Medicine Book by Murray & Nadel IInd Edition Vol.2 Pg.2424).

He also provided scientific proof that yogic breathing (pranayama) helps in asthma: It was believed that Yoga improves asthma but could not be proved in authentic scientific studies therefore yoga was never advised in treatment of asthma at international levels. Dr Singh carried-out the authentic studies including the first ever double blind placebo controlled study of the yoga. This study showed that yoga improved asthma. (Published in J. Asthma 1987;24:355-59; LANCET 1990;335:1381-83; Am Review Resp Disease 1990;141:A24, GINA guidelines for Asthma Management 2002 Pg.). He discovered a new mechanism in pathogenesis of asthma. Normally allergens cause asthma by inducing inflammation in airway mucosa. However, it is still not known why airway inflammation persists despite removal of allergens? What continues airway inflammation for such a long period is still a mystery. Dr Singh discovered that friction generated during activities causing fast breathing such as coughing may be very high and it may cause injury to airway mucosa. Repeated mucosal injury during coughing in asthmatic airways is the cause for continuance of airway inflammation. (Published in: Am Rev Respir Dis: 1993;147:A832; J Asthma 1999;36:419-426; JAPI 2000;48:501-504; JAPI 2000;48:343-45.)

Not only scientific works but Dr Virendra Singh has been very active for patient welfare activities. During his practice he realised that asthmatic patients passes through phases of well-again and sick-again cycles. These phases are quite painful and patient often stops treatment out of frustration, to further suffer from agony. Simple measures of lifestyle modification and learning about the nature of the disease can protect a patient from the agony of recurrent attacks of asthma. Dr Singh designed life style programs to mitigate asthmatic conditions which have benefited lacs of patients. His audio & video programs on asthma education were graded very useful for millions of asthmatic patients. They are now developed in nine Indian languages and are available free of cost on website www.asthmacure.com.

He is also national coordinator of Global Asthma Network and ILD India Registry. He is recently elected as President of Indian Chest society. While treating patients suffering from severe COPD (smoking induced lung disease) he realised that cessation of smoking was the most effective treatment. Therefore he established Indian Asthma Care society in 1986 to help needy asthmatic patients and to launch a campaign against tobacco. Through IACS pamplets, booklets, hoardings, audiovisual slides and CD programs were designed and presented at various public plateforms benefiting lacs of people. He motivated Sh Dharamveer ji Katewa present secretary IACS, who has filed a number of writ petitions in the courts and persuaded authorities for ban on tobacco, which helped in formation of anti tobacco laws in Rajasthan.

To help needy patients of respiratory diseases and patients with addiction through IACS he was instrumental in establishing Asthma Bhawan. It is a charitable institution having most advanced center for treatment of respiratory patients and tobacco related patients. 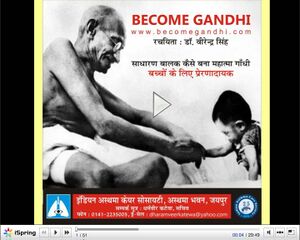 In order to motivate children to imbibe good moral character, a program based on principles of Mahatma Gandhi was designed and named “Satvikta ek pahal”. The program is presented to school children apprising them the strength of Gandhi’s character and its relevance to them as students. During his tenure in government service he designed a new method based on principles of Gandhian philosophy to solve day to day challenges.

It was a great success and based on his experiences he wrote a book entitled “Gandhi Marg: Ek Chikitsak ke Prayog”in hindi and “My experiments with Gandhi Marg” in English.[1]

In order to improve system of the country he also contested parliament elections as AAP candidate after obtaining voluntary retirement from the post of Superintendent of SMS Hospital.[2][3]

In recognition of his work leading he was awarded leading national and international awards. He is recipient of Independence Day Award of NRDC (15th August 1989), Commonwealth fellowship award (1988), Cash merit award of Rs 15,000/ of govt of Rajasthan (The highest cash merit award ever given), three awards of Association of Physicians of India, National Academy of Medical Sciences Award (Dr S Saxena Memorial Award 1990-91) given for for the best bio-engineering work in the country (Pink City Lung Exerciser), Hari Om Alembic research BC Roy award (1990) for the best fundamental research work in the country in field of medical sciences.

He has invented Pink City Flow Meter and Pink City Lung Exerciser very useful instruments for patients of Asthma. For fundamental research and inventions he was awarded the prestigious NRDC award by the Government of India in 1989. He was the first person in the Country to win this award below 35 years age. He was also awarded the most prestigious medical award of the country the Hariom Ashram B.C. Roy award in 1991.

He is also the recipient of the highest Cash Merit Award of Government of Rajasthan. During service he was one of the most successful Superintendent of SMS Hospital. Presently he is the Chief Editor of leading Respiratory Journal Lung India.

Saviour doctor for patients, inventor for scientists, mentor for children and crusader against tobacco, Dr Virendra Singh is an ideal icon for many.

Back to The Doctors