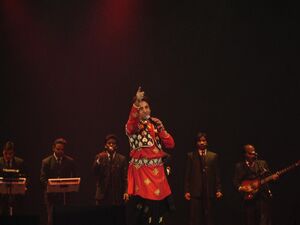 Gurdas Maan was born into the Mann Jat family[1][2]

Gurdas Maan (गुरदास मान) is a Punjabi singer, songwriter, choreographer, and actor. He was born on 4 January, 1951 in Giddarbaha, Muktsar District, Punjab, India.

Gurdas Maan gained national attention in India in 1980 with the song "Dil Da Mamala Hai". Since then he has gone on to record over 27 albums and has written over 200 songs.

Gurdas Maan was born in a Jat Sikh Maan[3][4] family in Gidderbaha Faridkot, Punjab (India). Gurdas Maan was formally educated in Malout. After completing his education there, his parents enrolled him into a further education institute in Patiala. As a keen sports enthusiast Gurdas was fascinated by the National Institute of Sports in the city, this prompted him to join the N.I.S and gain a Masters Degree in Physical Education.

During his time in Patiala he took part in youth festivals organized by various universities and won several awards for his singing and acting. He competed in many athletic events and won medals including a bronze at the National Championship as well as achieving a black belt (martial arts)|black belt in judo.[5]

In one of his stage plays he performed a song which he had written himself called "Dil Da Mamla Hai". The play was seen by a producer of a Jalandhar TV station, the producer who thought the song to have potential approached Gurdas with a proposition for a TV performance of the song to which Gurdas agreed. When the song was aired on December 31, 1980 it gained national attention and Gurdas Maan became a national figure. The overwhelming success of the song attracted the attention of HMV (not to be confused with the music retailer) who wanted to record and release the song. It was with HMV that Gurdas eventually released his debut album with a year later in 1981. When Gurdas began his career as a solo performer in India, the music industry was dominated by duet artists and Gurdas reportedly declined many offers to become part of a duet as he wished to perform and become a successful solo artist, since his debut Gurdas has always performed as a solo artist [6].

During his early career he also wrote and directed TV programs such as POP Time for the DoorDarshan Network in Delhi.

Gurdas Maan is often credited with raising Bhangra music from a regional level mostly in the Punjab to gain international recognition. Since its release the massively popular song "Apna Punjab" has surpassed all of his other songs in terms of popularity and critical acclaim, especially at the Asian Pop and Media Awards held in Birmingham in 1998 where “Apna Punjab” won Best Song and Best Album and Gurdas himself won Best International Artist. This song was originally written by Makhan Brar of Toronto. As Gurdas Maan was performing in concert in Toronto, Makhan Brar reportedly handed the song to Gurdas where he performed it on the spot, it was received well by the audience. Following that Gurdas added a final verse to the song and included it in his forthcoming album. In addition to these awards, Gurdas more recently won three music awards of Best Lyrics (Kudiye), Best Song (Heer), as well as Best Singer of the Year at the ETC Channel Punjabi Music Awards on the March 6, 2005. During a recent radio interview Gurdas revealed to the host,[Gagan Grewal, that he was and is an avid supporter of Manchester United football club[7].

Gurdas starred in the hit film "Shaheed Udham Singh", in which he portrayed himself as a Sikh man with no prejudices based on religion, caste or creed to which many of his fans and friends testify he is in real life. As a singer Gurdas Maan has worked with music directors such as Laxmikant Pyarelal, Bappi Lahiri, Anu Malik, Nadeem Sharvan, Amar Haidipur, Charanjeet Ahuja, and Jaswant Bhanyra .

He also recently starred alongside Juhi Chawla in the epic "Des Hoyaa Pardes". An emotive film illustrating the tragedies faced by the people of Punjab in the 1980s. He adopted the role of a son of a well-respected Jatt (farmer) Gurdev Singh Somal. He falls in love with a high ranking police officer’s daughter. Before the wedding, the father is murdered by separatists. This tale soon twists in to the inevitable demise of Gurshaan (Gurdas Maan). This movie was based on actual events.

Aside from singing in Punjabi, he is fluent in Hindi, Bengali , Tamil language, Haryanvi and Rajasthani languages. As an actor he has performed in Punjabi, Hindi and Tamil movies, most recently "Waris Shah - Ishq Daa Waaris," a depiction of the Punjabi poet Waris Shah 's during the creation of his epic poem Heer Ranjha , again co-starring Juhi Chawla and Divya Dutta. He also made a special appearance in Veer-Zaara with Shahrukh Khan and Preity Zinta.

In Karnal, Haryana, India on the 20 January, 2007 Gurdas was involved in a car accident in which his imported Range Rover SUV was hit and severely damaged by a truck near the town of Madhuban in Haryana. Gurdas escaped with minor injuries on his face, hands and chest. He was subsequently admitted to a Mohali hospital where he was examined by doctors who announced to the press that other than these minor injuries he was unharmed and fully fit.

This is the second car accident Gurdas Maan has been involved in and has escaped with minor injuries. The first accident was a head on collision between Gurdas’ vehicle and another truck on the 9 January, 2001 at a village near Rupnagar, Punjab. Unfortunately, in this accident Maan's driver was killed.

Gurdas is married to his wife Manjeet Mann and has one son, Gurik Mann who is currently studying at Eton College in Eton, Berkshire [8].

Gurdas Mann does a show in Canada, u.k., Australia, Singapore every other year and the year in between he is in the u.s.a. doing his shows with his INTERNATIONAL PROMOTER NIRMAL SINGH DHALIWAL and his BAY AREA PROMOTERS, GOLDEN PALMS ENT.

Besides these he has released 3 religious albums:

Back to The Actors