Baba Haridas (1594 - 1691 AD) (बाबा हरिदास) was a famous saint of (Dagar) clan from Delhi whose temple exists in Jharoda Kalan village, in Najafgarh block of Delhi.

Baba Haridas was born in April 1594 AD in Jharoda Kalan village on chaitra shukla 6th. His mother's name was Mankaur.

He did not get formal education but was proficient in reciting Sanskrit and Hindi Shlokas. He is said to have performed many acts of super natural powers. He believed in simple living and wore hand made cloths.

He was married to Mahakaur of village Pooth. 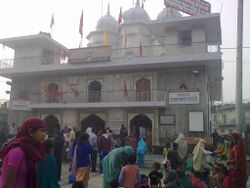 Jharoda Kalan village is known for Baba Haridas temple and the adjoining pond. People from far and wide have faith attached to this temple and an annual fair (after Holi festival) is held there.

Annual fairs are held on his samadhi twice in a year on his birth date chaitra shukla 6th and Ashoj Shukla 6th.