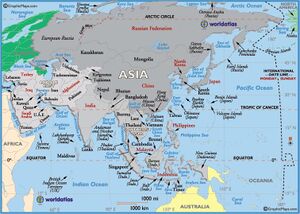 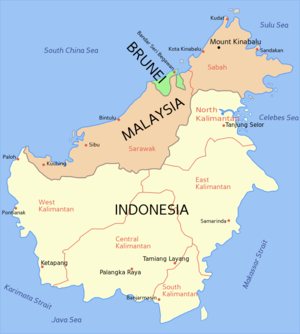 Indonesia is a country in Southeast Asia. The nation's capital city is Jakarta.

The Indonesian archipelago has been an important trade region since at least the seventh century, when the Srivijaya Kingdom traded with China and India. Local rulers gradually adopted Indian cultural, religious and political models from the early centuries CE, and Hindu and Buddhist kingdoms flourished. Indonesian history has been influenced by foreign powers drawn to its natural resources.

Across its many islands, Indonesia consists of distinct ethnic, linguistic, and religious groups. The Javanese are the largest and most politically dominant ethnic group. Fossilized remains of Homo erectus, popularly known as the "Java Man", suggest that the Indonesian archipelago was inhabited two million to 500,000 years ago. Austronesian people, who form the majority of the modern population, migrated to South East Asia from Taiwan. They arrived in Indonesia around 2000 BCE, and confined the native Melanesian peoples to the far eastern regions as they expanded. Ideal agricultural conditions, and the mastering of wet-field rice cultivation as early as the eighth century BCE, allowed villages, towns, and small kingdoms to flourish by the first century CE. Indonesia's strategic sea-lane position fostered inter-island and international trade. For example, trade links with both Indian kingdoms and China were established several centuries BCE. Trade has since fundamentally shaped Indonesian history.

From the seventh century CE, the powerful Srivijaya naval kingdom flourished as a result of trade and the influences of Hinduism and Buddhism that were imported with it. Between the eighth and 10th centuries CE, the agricultural Buddhist Shailendra and Hindu Mataram dynasties thrived and declined in inland Java, leaving grand religious monuments such as Sailendra's Borobudur and Mataram's Prambanan. The Hindu Majapahit kingdom was founded in eastern Java in the late 13th century, and under Gajah Mada, its influence stretched over much of Indonesia; this period is often referred to as a "Golden Age" in Indonesian history.

Sunda are one of the largest groups of people yet unreached for Christ. Population of these people is 3065000. They live in the western portion of the Indonesian island, Java. This tropical island lies just northwest of Australia.

Although the Sundanese speak their own language, called Sunda (part of the Malayo-Polynesian family), many also speak Javanese. They are culturally similar to the Javanese, but set themselves apart by personality. They claim to be more open and informal than the Javanese.

Historically, the Sundanese culture has remained somewhat isolated. While the cultural influences of India were spreading across Southeast Asia in earlier times, they had little effect on the orang gunung (mountain people) of Java.

To be Sundanese is, ideally, to be a rice farmer. Unfortunately, many of the villagers do not own enough rice land to provide for their daily needs. Because of this, nearly all of the villagers engage in small trade, crafts, seasonal farming, or service occupations. Besides rice, other crops grown on dry land include corn, root crops, chili peppers, and tobacco. Coastal areas tend to have mixed economies of rice, fishing, and/or fish farming.

Sundanese villages contain between 1,000 and 7,000 people, and the houses lie clustered together. Homes are often built up on poles or stilts. The villages are separated by small agricultural fields.

Traditional values are still strong in the villages and represent a behavior code known as adat, (guidelines that were laid down by their ancestors). The purpose of adat is to maintain peace and unity inside the village, between people, and within the "cosmic whole," of which they are a part. Change is slowly coming to the villages, with new ideas being introduced to those attending work or schools in the cities. The power of adat tries to slow down these new influences. However, recent developments, such as television and improvement of countryside roads, are bringing changes that even adat cannot stop.

Though not much is known about the kinship system of the Sundanese, we do know that the line of descent is through both of the parents. There are also evidences that ancestor worship (worshipping the spirits of deceased ancestors) was practiced. While many people may be recognized as relatives, the nuclear family remains the primary unit. Homes are basically matrilocal, meaning that the married daughters' homes are located near the parents' house, if available land permits. The parents' home is usually inherited by the youngest daughter, who stays at home after she is married to care for her parents.

Social etiquette is taught by the mother; whereas, the father is responsible for the physical needs of the child. Perhaps this is the reason Sundanese children seem to have a spiritual connection with their mothers rather than with their fathers.

In the past, marriages were arranged by the parents. Today, however, young people make their own choices with parental approval. Wedding ceremonies consist of traditional rituals that represent a settled life founded by the rice goddess, Dewi Sri.

Indian scholars wrote about the Dvipantara or Jawa Dwipa Hindu kingdom in Java and Sumatra around 200 BC. The Taruma kingdom occupied West Java around 400. Buddhist influence about 425.

The Singhasari kingdom fell to the Majapahit who allied with Mongols 1293 to defeat the Singhasari. The Majapahit then turned on the Kublai Khan's forces and drove them out. This established Majapahit hegemony over Java. There remain Hindu communities in Java. Today, the Tenggerese, some Osings, and to some extent the Baduis are still Hindus.

Under the influence of Hinduism and Buddhism, several kingdoms formed on the islands of Sumatra and Java from the 7th to 14th century. The arrival of Arab traders from Gujarat, India later brought Islam, which became the dominant religion after the collapse of Hindu and Buddhist Kingdoms.

Are Sunda people Jats from India ?

We know that Sunda is a well-known gotra of Jats in India. It is interesting to know if these people of Indonesia have any relation with India. Have jats ever moved to Indonesia? The period of history given above pertains to that of the great Mauryan king Ashoka. Mauryas are considered by Jat historians as Jat rulers. Jats had adopted Buddhism during Mauryan Empire. Probably Sunda people of Java are Sunda jats of India.

I have one record of movement of Jats from India to far off islands is from a book written by Cap. Bhagwan Singh who was High commissioner of Fiji. He has been President of all All India Jat Mahasabha also. In his book MY FATHER’S LAND-FIJI he has written that-

“ It was sheer fate which took my grandfather, Ram Chander Singh, and grandmother, Padam Kaur, to the shores of Fiji Islands in 1885. It was a move, which broke with the strict conservative traditions of north-India family. .... Emigrant ships had been sailing to Natal, British Guyana, Trinidad, the West Indies, and Dutch, Spanish and French colonies for the past 60 years when the first emigrant ship to Fiji, “Lewidas”, arrived on the 15th of May, 1879. It added 498 more Indians to the nearly 340000 already living in other far-flung British colonies.

…..It was the same route that any traveler takes today, crossing almost 1300 kms across the Gangetic plain, passing through Kanpur, Allahabad, Varansi and Patna. It was this area, east of Agra, where the majority of their fellow labours in Fiji would come from…..”

From the above version given by Cap. Bhagwan Singh it is clear that Jat families have been moving from India to Fiji through Indonesia taking a round of Australia. It is quite possible that Jats have moved to Indonesia in large number.

The symbol of education in Indonesia (like saraswati in India) till today is Ganesha. They are muslims but worship Ganesha. And its not that some of them out of choice were doing so. Its their national symbol.

Views of Rabari Rabar, Jatland member, are reproduced from discussion on Jatland thread.[2]

I am aware of these two view points: (1) only Jats are people who are looking like most 2000 C.E. Jats (we do not know if our 2000 B.C. Jat ancestors were white or brown or yellow or black or blue); versus (2) Jats are anyone with Jats Y DNA and mt DNA (gotras). It may be of interest if I explain why I find this subject (very) important.

Few years ago, I interacted with some French persons familiar with St. Croix. [3] Because of my name (related to the place they think where their ancestors dwelt in the recent past), they wanted to know what I think about the origin of the name. After I told them what a Jat is and why gotras are important to Jats, one person mentioned the Templar of Portugal with some Tomar heritage, builders of magnificent churches. [4]”.

I kept explaining that they were talking about Christianity gothic looking architectures while I was talking about Indian Jat Gotras! I was of the type (1) “Hitler Jat”: to me, these blue eyed ladies with yellow hair cannot be Jats although their name is Rabary or Tomara.

Then, someone explained about the recent mt DNA researches, [5] and its consequences on the Jews. The Lemba tribe of South Africa and the Falasha tribe of Ethiopia are as black as any black African, but they claimed Jews heritage. Then came in the mt DNA analysis, which proved not only that they were indeed as pure Jews as any Russian Jews or Iranian Jews, but also to which tribe of Israel they each belong to: they are now active members of the World Jews Congress.

This some what opened my eyes and I now lean toward the type (2) “scientific Jat”. Now, every time I find a Jat gotra looking name, be it in America or Africa or Asia, I want to know if they are not my far removed relatives! I also want to know what other Jats think about it!!

The irony of the story is another twist: a group of Jews now advocate the idea that Jews are actually of Indian origin. They say that the biblical story of Abraham who introduced his wife Sarah (Jat Gotra!) as his sister to Pharaoh of Egypt is in fact the same story of the Hindu mythology, which says that Sarasvati is Brahma's sister. [6] Now, every time I see great scientific achievements across ages, I ask myself if these achievements were not the work of Jats related to my ancestors!