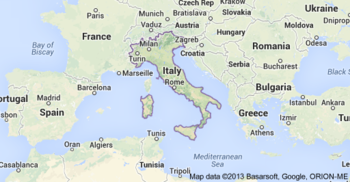 Serbia (Serbian: Република Србија) is a country located at the crossroads of Central and Southeast Europe, covering the southern part of the Pannonian Plain and the central Balkans. The capital of Serbia, Belgrade, is among Europe's oldest cities and one of the largest in Southeast Europe.

A landlocked country in relative proximity to the Mediterranean, Serbia borders Hungary to the north; Romania and Bulgaria to the east; Macedonia to the south; and Croatia, Bosnia, and Montenegro to the west; it also borders Albania through the disputed territory of Kosovo.

The name "Serbia" was first mentioned as Greek: Σέρβια, meaning "land of the Serbs". There are many theories regarding the origin of the name of the Serbs. The most likely is that it is derived from the Old Slavic root *serb-, meaning "same".[1] Another proposed etymology is that of the Indo-European root *ser- "to watch over, protect", akin to Latin servare "to keep, guard, protect, preserve, observe".[2]

In 2005, several possibly Triballi graves were found at the Hisar Hill in Leskovac, southeastern Serbia.[3]

In June 2008, a Triballi grave was found together with ceramics (urns) in Požarevac, central-eastern Serbia.[4]