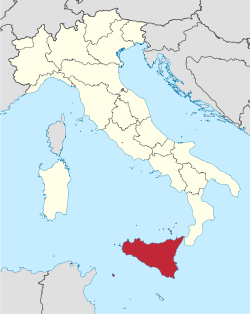 Sicily (Italian: Sicilia, Hindi: सिसली) is the largest island in the Mediterranean Sea. It constitutes an autonomous Region of Italy, along with surrounding minor islands, officially referred to as Regione Siciliana (Sicilian Region). Sicily was given special status as an autonomous region after the Italian constitutional referendum of 1946.

Sicily is located in the central Mediterranean Sea, south of the Italian Peninsula, from which it is separated by the narrow Strait of Messina. Its most prominent landmark is Mount Etna, the tallest active volcano in Europe, 3,329 metres (10,922 ft) high, and one of the most active in the world. The island has a typical Mediterranean climate.

Beginning in the 2nd century BC, Rome went through a significant population expansion as Italian farmers, driven from their ancestral farmlands by the advent of massive, slave-operated farms called latifundia, immigrated to the city in great numbers. The victory over Carthage in the First Punic War brought the first two provinces outside the Italian peninsula, Sicily and Corsica et Sardinia. Parts of Spain (Hispania) followed, and in the beginning of the 2nd century the Romans got involved in the affairs of the Greek world. By then all Hellenistic kingdoms and the Greek city-states were in decline, exhausted from endless civil wars and relying on mercenary troops. This saw the fall of Greece after the Battle of Corinth (146 BC) and the establishment of Roman control over Greece.[1]

Since many different cultures settled, dominated or invaded the island, Sicily has a variety of archeological sites. Also, some of the most notable and best preserved temples and other structures of the Greek world are located in Sicily. There are also some UNESCO World Heritage Sites.