Sheikhupura or Shekhupura (Hindi:शेखुपुरा, Urdu: شيخوپورہ), the ancient Singhpuria or Virkgarh, is an industrial city in the Punjab province slightly northwest to Lahore in Pakistan. 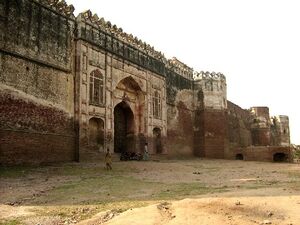 It is known for its historical places, and is commonly known locally as Qila Shaikhupura, because of the fort in the city, constructed by the Mughal Emperor Jahangir. Sheikhupura is the headquarters of Sheikhupura District. It is approximately 35 km from Lahore.

The area of present day Sheikhupura was adobe of Virk Jat. They built a fort here known as Virkgarh which was destroyed by Badshah Jahangir who built a Fort near the site of old fort. He named the fort on his nickname Sheikhu hence Sheikhupura (alternatively called Jahangirpura). The Muslim Bhatis and Sikhs struggled for this fort. Lehna Singh Majithia finally conquered this fort and recontructed the Fort. Most of the building today is build during Sikh rule.[1]

The history of Sheikhupura goes back to 100 BCE. Historical research has established the fact that Sangla or Sakala was the capital of Punjab once, and it was here that Alexander the Great of Macedonia (known locally as Sikandar e Azam) fought one of his most serious battles of his career. Its name is spoken of, firstly in the pages of Tuzk-e-Jahangiri as Jahangirpura, after the name of Prince Salim Nur u Din Muhammad Jahangir.

Emperor Nor-u-Din Muhammad Jahangir laid the foundation of historical Sheikhupura. In 1607, Sheikhupura was constructed following an order of Jahangir. The father of Jahangir, Emperor Jalal-uddin Mohammad Akbar use to call him Sheikhu (a nick name). During Sikh rule the new city was named Singhpuria, previously was known as Jahangirabad.

During the reign of Emperor Jahangir (1605 to 1627), Sheikhupura had the status of royal hunting ground. In Tuzke-Jahangiri, Jahangir wrote during the events in 1607:

“ On the day of Tuesday, I reside in Jahangirpura, my hunting ground. According to my order, a Minar and a grave for my deer, Mansraj, were constructed here."

Mughal Emperor Jahangir granted the estate of Sheikhupura to Syed Usman, the father of Shah Bilal, a religious preceptor of the line of Qadiriyyah.

Over the whole district, the period between the decline of the Mughal Empire after the death of Mughal Emperor Aurangzeb and the rise of Sikh confederacies was one of utter confusion and anarchy. The successive shocks of invasion from the northwest, and the devastation caused again and again by the invading armies of Nadir Shah.

Nadir Shah and Ahmad Shah Abdali (1724-1773)almost completely ruined the prosperity of the tract. After the death of Aurangazeb, Muslim power was broken by the Sikhs who ruled through various misls or small to medium sized groups. Nadir Shah and Ahmad Shah Abdali led raids that further weakened local Muslim rule. Several raids were made by the Bhangi Sardars, a Jat Sikh community. Finally around 1780, Maharaja Ranjit Singh (Punjab), a Jat Sikh ruler defeated the grandson of Ahmad Shah Abdali and later captured this district. The Sikhs were defeated by the British around 1850 and it stayed under British rule until India's independence in 1947.

In 1851, Tehsil Sheikhupura worked under Gujranwala. The Artimapal Secretary Chief Commissioner Lahore wrote a letter to the Department of Wealth in 1855 to combine the Tehsil Sheikhupura with the District of Lahore but it was never done. As soon as it became a District Zillah, a lot of lawyers came to practice. Under guidance of Sir Ganga Ram, district courts and hospitals were constructed in the city.

According to Thakur Deshraj[2] Rani Jind Kaur wife of Maharaja Ranjit Singh (Punjab) and mother of Maharaja Dalip Singh was imprisoned in Sheikhupura Fort by the British Govt. Sir Ganga Ram was her advocate at that time who was hanged to death along with his other companion.

According to the historians, the present-day city of Sheikhupura in the province of Punjab (Pakistan), was the site of Virkgarh till the Mughal emperor, Jahangir built the city of Sheikhupura. The epical ancestor of Virks, Raja Virk Vardhan, was a ruler of the area with its capital being the present-day city of Sialkot, Punjab (Pakistan). The eastern extent of his Raj included Amritsar, which, still, belongs to the Virks.

A majority of Virks live in the Sheikhupura district and some are scattered in Sialkot District. There is a small village "Virk" in Sialkot inhabited by Virk Jats. Virks still control the city of Sheikhupura (the ancient Virkgarh) both, politically and economically.

Ram Sarup Joon [3] writes ...Bahik, Bahi, Bahin or Bahela: Bahik Jats is found both among the Hindu and Sikhs. In Pakistan there are Muslim Bahele Jats-, Bahiks are mentioned in Mahabharat also. According to "Karna Parva", chapter of the Mahabharat) King Shalya paid l/6th part of his income to the Bahiks. According to Nandlal Dey, Bahik are a sub branch of the Madraks. Arat in district Sheikhupur was their capital. Hashak, Karmabh Kalak and Karkar were their important towns. In Daurala (District Meerut, U.P.) the Bahiyan Jats have six villages.

Shekhupura is also the name of a village in Patiala district of Punjab. This village falls under Patiala Tahsil.