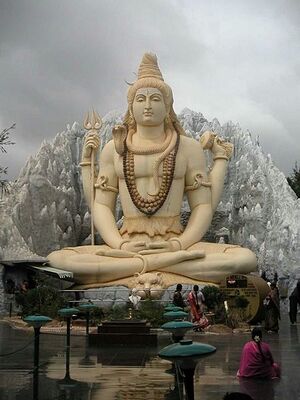 Shiv Ki Jata is the area around Haridwar. It is the birthplace of the Jat Raja Virabhadra who was a follower and admirer of Shiva.

Story of Origin of Jats

Ram Sarup Joon[1] writes that ....There is a theory about the ancient root of the word ‘Jat’ ....‘A race originated from ‘the “Jatas of Lord Shiva and thus came to be known as Jats.”

It means that the Jat was born out of Shiv Ji’s Jata and is the brother of the Ganga; he should, therefore remember God day and night.

According to Shiva Purana, Shavi, or Shiv Ji, the elder son of Raja Ushinar was married to Sati, daughter of Raja Daksha of Kankhal. He became a Yogi. Raja Daksha did not approve of this. When Raja Daksha performed a Yagya, (sacrifice) he invited all except Shiv Ji and Sati. Sati considering it an unintentional omission on the part of her father went uninvited but was completely neglected by Raja Daksha, who neither greeted her nor gave her any present out or the Yagya.

Sati could not bear the insult, jumped into the fire of the Yagya and burnt herself alive. When Shiv Ji’s followers returned and narrated the story, Shiv Ji became furious. He plucked his Jata (long hair) and stuck it against a stone. It broke into two; one piece was transformed into Vir Bhadra and other into an army. On Shiv Ji’s instructions Vir Bhadra went and severed the head of Daksha. One belief is that descendants of Vir Bhadra came to be known as Jats because he was created out of Shiv Ji’s Jatas.

The above story has been presented in the Shiva Purana in a dramatic manner in those days, as was the literary style in those days, and is meant to be interpreted metaphorically and not literally.

This is the area around Haridwar. King Bhagirath brought the Ganga to the plains in this region. According to legend the Ganga flows out from Shiv Ji’s Jata. Actually this also means that

History of the Jats, End of Page-16

the Ganga flows out from the area known as Shiv ki Jata, the birthplace of the Jat Raja Vir Bhadra who was a follower and admirer of Shivji. On hearing of Sati’s tragedy, Shiv Ji went to the durbar of Vir Bhadra and pulled at his hair in fury while narrating the story. This infuriated Vir Bhadra and with his army, are invaded Kankhal and killed Daksha.

Raja Vir Bhadra had five sons and two grand sons named Pon Bhadra, Jakh Bhadra, Kalhan Bhadra, Brahma Bhadra, Ati Sur Bhadra, Dahi Bhadra and Anjana Jata Shankar. Seven major Jat gotras are named after these seven descendants of Vir Bhadra. A detailed account of these is found in the family history of Rana of Dholpur. This proves the descent of some Jats from Vir Bhadra.

Raja Vir Bhadra’s descendants were however not the only Jats. A famous Jat gotra is Shavi, whose yet other famous branches are Takshak and Bachhik and they claim their lineage from Shiv Ji. In the Matsya Puran it is mentioned that King Ushinar father of Shiv Ji, and grandson of King Shishu Bandha performed one hundred Yagyas and was given the title of Yat. It is, therefore, believed that the descendants of Ushinar began to be called Yats and later on Jats. This is also a reasonable inference as Shavi gotra is found in a large number amongst the Jats.

History of the Jats, End of Page-17

Both these tribes i.e. of Vir Bhadra and Shiva, however, belonged to Yadu and Puru, two of the five branches of ‘Yayati’ dynasty of the earliest Aryans who had originally settled in this very area.

There are other gotras of Jats based on the other three branches of ‘Yayati’ i.e. Druhyu, Anu and Urdas who also lived in the same area. It would therefore be correct to say that not only ‘Yat’. But ‘Yayat’ got converted into Jat. It is also possible that in these dynasties Ushinar was not the first and only one to earn the title of ‘Yat’ which was an honour bestowed on one who did outstanding noble deeds. The conclusion, therefore, is that 'Jats are descendants of Yayati in whose dynasty Yat was the highest title and their ancient stronghold was known as Shiv ki jata.

History of the Jats, End of Page-18

King Bhagiratha brought the Ganga to the plains in this region. According to legend the Ganga flows out from Shiva's Jata. Actually this also means that the Ganga flows out from the area known as 'Shiv ki Jata', the birthplace of the Jat Raja Virabhadra who was a follower and admirer of Shiva. On hearing of Sati's tragedy, Shiva went to the durbar of Virabhadra and pulled at his hair in fury while narrating the story. This infuriated Virabhadra and with his army, are invaded Kankhal and killed Daksha. [2]

Ram Sarup Joon[3] writes that ....It has already been stated that Raja Vir Bhadra was the ruler of the area known as Shiv Ki Jata. He was of Puru Vansh and ancestor of seven Jat gotras. In the same dynasty, the Jat gotras Midh, Midhan, Mel and Ajmel claim their descent from Raja Hasti of Hastinapur. Therefore, the continuous chain of Jat rule is traced back to Raja Yudhishtra, ruler of Hastinapur and Indraprastha, later known as Delhi. The third ruling Jat dynasty in this line was Dhillon whose descendants are the present Jat gotras Dhillon, Dhilwal and Dhill.