Bhagiratha (भगीरथ) was a great king who brought the River Ganga to Earth.

His enemies dispossessed Bahuka of his kingdom. He went to the forest accompanied by his wives. When he died, the eldest queen prepared herself for death also. Rishi Aurva knew her to be big with child, and dissuaded her from accompanying her husband on to the funeral pyre. The co-wives of the queen, out of jealousy, gave her poison. The child was born with this poison, therefore he was called Sagara (Sa = with, gara = poison.) Sagara became a great king. The Seas were dug by his sons. He was prevented by Rishi Aurva from taking the lives of the Talajanghas, Yavanas, Sakas, Haihayas, and Barbars. But he made them change their outward look. He performed an Asvamedha sacrifice as advised by Aurva and Indra stole the sacrificial horse.

Bhagiratha was the king of Kosala, a kingdom in ancient India. He was a descendent of the great king Sagara of the Suryavansh. He was one of the forefathers of Lord Rama. He lost his father when he was just a child, and was raised by his mother. Bhagiratha was very intelligent, virtuous and kind hearted. When he came of age, Bhagiratha ascended to the throne of the kingdom of Kosala, today located in the Indian state of Uttar Pradesh. He was a pious, benevolent ruler who adhered to his duties as a king as prescribed by dharma.

Bringing the Ganga to Earth

When king Sagara chose to perform the Ashwamedha yagna, his royal agents lost track of the sacrificial horse. Sagara ordered his sixty thousand sons by Sumati to track down the horse. The proud and mercurial princes raged across Bharat, burning down forests and uprooting life and property to find the horse. They finally arrived at a quiet spot where the Sage Kapila was sitting in meditation. Besides him was tied the white horse. The enraged princes condemned Kapila as a thief and attacked him. Using his terrible mystic power, Kapila instantly turned the princes into ashes. Another version has it that the horse was stolen by a jealous Indra who did not want the yagna to succeed, and hid it in cave where sage Kapila was meditating in order to escape being accused of the stealth.

Kapila told the prince Anshuman, Sagara's other son who had come looking both for the horse and his brothers, that the only way for the souls of the dead princes could rise to heaven would be through the offering of niravapanjali with the water of the sacred Ganga river, which was flowing only in Swarga.

Bringing Ganga back to Earth was a near impossible task and required many years to be spent in tapasya and prayer. The Kosala kings of successive generations could not do this while managing their duties as kings. As a result, the sins of the thousand princes multiplied in their destructive energy, and began resulting in natural disasters. The kingdom began to lose its peace and prosperity, and by the time Bhagiratha ascended the throne, he found it impossible to attempt to govern in this situation, that had only one solution.

Turning over the kingdom to trusted ministers, Bhagiratha set off to the Himalayas to perform an arduous tapasya in the extreme climate. For one thousand years, he performed an excruciatingly harsh penance to please Lord Brahma. At the end of the thousand years, Brahma came to him and told him to ask for anything. Bhagiratha asked Brahma to bring down the river Ganga to earth so that he may perform the ceremony for his ancestors.

Brahma asked Bhagiratha to propitiate Lord Shiva, for only He would be able to break the Ganga's fall. It was the largest river, and it would be impossible for anyone save Him to contain the destructive impact of this event. Bhagiratha performed a tapasya for Lord Shiva, living only on air. The compassionate Shiva appeared only after a year's penance, and told Bhagiratha he should not have to perform tapasya to accomplish a noble goal such as this. He assured Bhagiratha that he would break Ganga's fall.

After eons of being flattered and praised by the Devas, Ganga had become vain. She scoffed at Brahma when He asked her to flow down to earth, but could not disobey him as he was her father.

But Ganga was sure, as much as Bhagiratha was afraid that no one could stop her fall, which would devastate the earth for a long time. As she cascaded across and down from Swarga, Bhagiratha and celestial observers were terrified of the roar and volume of water coming down. But Lord Shiva appeared from out of nowhere and captured all of Ganga just as she launched herself onto earth, in His jata.

Ganga struggled to set herself free, but Shiva could not be budged. Bhagiratha worshipped Shiva, who let Ganga free after crushing her vanity. She flowed, and is still believed to flow, from Shiva's jata down to earth at a gentler pace.

Establishment of the river

King Bhagiratha led the way for Ganga on his chariot, and she followed him across the north and east of Bharat and finally merging with the ocean. In her course she washed the ashes of Sagara's sixty thousand sons, who ascended to heaven while praising and blessing Bhagiratha.

The birth of Ganga 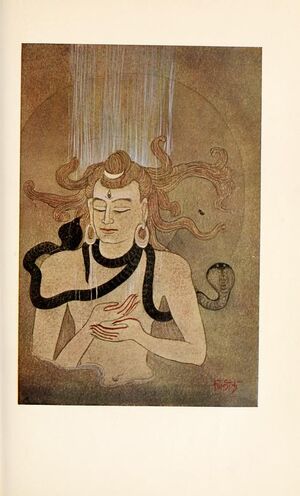 The birth of Ganga by Khitindra Nath Mazumdar

Sister Nivedita and Anand K. Coomaraswamy[1] tell us the following story of the birth of Ganga story.

It is Shiva among the major deities of the Hindu pantheon, who appears in the most widely known version of the birth of Ganga story. Told and retold in the Ramayana, the Mahabharata and several Puranas, the story begins with a sage, Kapila, whose intense meditation has been disturbed by the sixty thousand sons of King Sagara. Livid at being disturbed, Kapila sears them with his angry gaze, reduces them to ashes, and dispatches them to the netherworld. Only the waters of the Ganges (Ganga), then in heaven, can bring the dead sons their salvation. A descendant of these sons, King Bhagiratha, anxious to restore his ancestors, undertakes rigorous penance and is eventually granted the prize of Ganga's descent from heaven. However, since her turbulent force would also shatter the earth, Bhagiratha persuades Shiva in his abode on Mount Kailash to receive Ganga in the coils of his tangled hair and break her fall. Ganga descends, is tamed in Shiva's locks, and arrives in the Himalayas. She is then led by the waiting Bhagiratha down into the plains at Haridwar, across the plains first to the confluence with the Yamuna at Prayag and then to Varanasi, and eventually to Ganga Sagar, where she meets the ocean, sinks to the netherworld, and saves the sons of Sagara. In honour of Bhagirath's pivotal role in the avatarana, the source stream of the Ganges in the Himalayas is named Bhagirathi, (Sanskrit, "of Bhagiratha").[2]

Adi Parva, Mahabharata/Book I Chapter 177 mentions Kshatriyas who came on Swayamvara of Draupadi. Bhagiratha (भागीरथ) is mentioned in Mahabharata (I.177.19). [3].... all these of the Vrishni race, Bhagiratha, Brihatkshatra, Jayadratha the son of Sindhu, Brihadratha, Balhika, the mighty charioteer Shrutayu,....