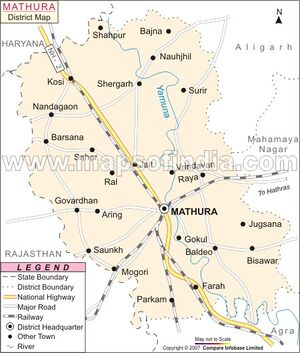 Location of Vrindavan in Mathura district

Vrindavan (वृन्दावन) is town in Mathura tahsil in Mathura district in Uttar Pradesh.

Alexander Cunningham[1] writes that The city of Klisoboras has not yet been identified, but I feel satisfied that it must be Vrindavana, 6 miles to the north of Mathura.[2] Vrindavana means the " grove of basil-trees," which is famed over all India as the scene of Krishna's sports with the milkmaids. But the earlier name of the place was Kalikavartta, or " Kalika's whirlpool," because the serpent Kalika was fabled to have taken up his abode just above the town, in a Kadamb tree, overhanging the Jumna. Here he was attacked by Krishna, and the rapid convolutions of his tail in his dying struggles are said to have caused the eddy, which is now known by his name. Now, the Latin name of Clisobora is also written Carisobora and Carisoborka in different MSS., from which I infer that the original spelling was Kalisoborka, or, by a slight change of two letters, Kalikoborta or Kalilcabarta. In the Prem Sagar this whirlpool of the Jumna is attributed to the poison that was vomited forth by the serpent Kali against Krishna, when he was swimming in the river. Allusion is made to the natural increase of the serpent's poison by offerings of milk, which would seem to refer to a previous state of serpent-worship. Milk offerings are still made occasionally, but only to test the divine nature of the serpent, who is supposed to possess the most miraculous powers of drinking. In the last century, Raja Chet Singh, of Benares, is said to have poured all the milk of the two cities of Mathura and Vrindavan down the hollow Kadamb tree, and as the waters of the Jumna were not even tinged, the serpent Kalika's miraculous powers of milk- drinking were established more firmly than ever.

The Jat rulers of Bharatpur constructed several religious and secular buildings here including famous palaces to make their stay at this place pleasurable.

Raja Mahendra Pratap was an educationalist, social reformer and revolutionary freedom fighter at the same time, who believed in providing the vocational training for the youth to make them self sufficient to earn their livelihood with sense of dignity. On May 24, 1909, he started a Technical Institute named Prem Mahavidyalya at Vrindavan in Uttar Pradesh. This was an effort in the direction to bring India at par with European Countries in the advancement of science and technology in those days.