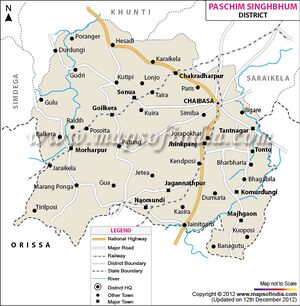 West Singhbhum (पश्चिमी सिंहभूम) is a district of Jharkhand state, India. It came into existence on 16 January 1990, when the old Singhbhum district was bifurcated. Chaibasa is the district headquarters.

Rivers: Following are some of the rivers flowing in the West Singhbhum District: Koel, Karo-Koina, Kuju, Kharkai, Sanjai, Roro, Deo, and Baitarini.

There are several accounts relating to the origin of the name of the district:

Several Iron slags, microlith, Potsherds have been discovered from Singhbhum district which are from 1400 BCE according to Carbon dating age.[1]

West Singhbhum is one of the oldest districts of Jharkhand. After the British conquest of Kolhan in 1837, a new district was consequently constituted to be known as Singhbhum with Chaibasa as its headquarters. Subsequently, three districts, namely East Singhbhum, West Singhbhum and Seraikela Kharsawan have been carved out of erstwhile Singhbhum district.

According to Dr Naval Viyogi, It seems from the evidence of Puri Kushan coins that some branch Tanka of Taka royal family owing to attack of Kushanas up to Magadha, reached Mayurbhanj, Singhbhumi, Ganjam and Balasore and established colonies there, where remains of their offshoot, the royal family of Dhavaldev is still existing at Dalbhumigarh near Kharagpur. [2]

Following are some of the rivers flowing in the West Singhbhum District[3]:

Sahid Park Chaibasa: Shahid Park is a newly developed park in West Singhbhum, which is administered by the Government of Jharkhand. It is an ideal place to relax for the people with enjoying its natural beauty. While enjoying holidays at West Singhbhum, you can simply spend your time at this park with your near and dear ones.

Bidri :- The village lies in Manjhari Block. It has a small lake on it’s outskirts with a hill lock to the east. The forest Dak Bungalow situated west of the lake commands a fine scenic view. The Thakora waterfall is about 6 Kms. away.

Chainpur :- The village lies in Chakradharpur block and is noted for it’s Shiva Temple. Large fairs are held annually on the occasion of Shiva Chaturdasi & Chaitra Sankranti (Month-April).

Hirni :- The village is situated 40 Kms. North of Chakradharpur on the Ranchi-Chaibasa road. It contains a beautiful waterfall in the midst of dense forest. It is popular picnic spot.

Jagannathpur :- The village is the headquarter of the development block bearing the same name and is situated 45 Kms. South-West of Chaibasa. The Village derives its name from its founder, Raja Jagannath Singh of Porahat. It has an old temple of Lord Shiva.

Jojohatu :- The village is situated 22 Kms. West of Chaibasa amid forests. It is noted for it’s Chromites deposits and iron ore mine by the Singhbhum Chromites Company and the TISCO.

Kera :- The village is situated about 10 Kms. North-East of the block headquarter at Chakradharpur. It is noted for the annual three-day fair held there on the occasion of Chaitra-Sankranti.The village has a Bhagwati temple, which attracts a large number of devotees.

Kotgarh :- The village lies in Jagannathpur block. According to local belief, it was the seat of very powerful Indian rulers whose sway spread over the areas of Jagannathpur, Manjhari, Manjhgaon & Chakradharpur only a century ago. Narpat Singh who had built fortresses at Kotgarh, Jagannathpur & Jaintgarh is said to have been the last king of the Dynasty.

Lupungutu :- It is a small village situated only 2 Kms. West of Chaibasa town. It has a perennial natural spring, which is a popular picnic spot.

Mahadebsal :- The place is situated about 5 Kms. from Goilkera. It contains an important temple of Lord Mahadev. A large fair is held annually on the occasion of Shiva Ratri.

Ponga :- The village is situated about 14 Kms. from the block head-quarter at Chakradharpur. It is noted for the remains of the place known as “Mangarh” traditionally ascribed to Raja Man Singh who was Sorag (Sic) by caste. The village has a temple of Pauri Devi.

Porahat :- The village used to be the headquarter of the erstwhile Porahat Raj, which extended over a large part of the district.

Ramtirtha :- The village lies in Jagannathpur block and is noted for it’s annual fair held on Makar Sankranti day (January). It has a Shiva Temple and a waterfall on the Baitarni river. According to Local tradition, Lord Ramchandra crossed this river on Makar Sankranti day, when the fair is held.

Tholkobad :- The village lies 46 Kms. south of the block headquarter at Manoharpur. It is scenically situated amid forests at an elevation of 1800 ft. and draws may visitors,particularly for game.The oldest Sal tree the “SARANDA QUEEN” exists here. The perimeter of the tree is 25 ft.

Benisagar :- This is situated in the border of West Singhbhum & Orissa. The place was named after the king Beni. This is famous for archaeological findings.