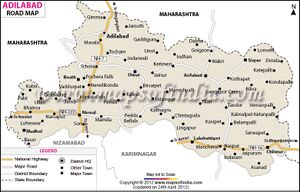 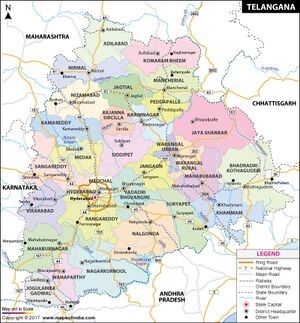 Adilabad (आदिलाबाद) is a city and district in Adilabad district of the Indian state of Telangana.

Adilabad was ruled by many dynasties like the Kakatiyas, Mauryas, Satavahanas, Chalukyas, Qutub Shahis & Asaf Jahis. Adilabad derives its name from the erstwhile ruler, Yusuf Adil Shah. Major local cultures include Telugu and Marathi. The earlier name of Adilabad was Edlabad during the rule of Qutub Shahis.[1]

Following content is from ....History And Legend In Hyderabad, Department of Information and Public Relations, 1953, p.3-6

[p.3]: Historically, the northern portions of the district, including the present taluqs of Kinwat, Boath, Adilabad, Utnur and Rajura seem to have formed a part of the Berar. The taluqs of Sirpur and Asifabad were ruled by the Gonds for many centuries, while the taluqs of Chinnur, Lakshettipet and Nirmal have been inhabited by Telugu-speaking population for a longtime.

Monuments of Yadava rule which lasted upto 1320 can be noticed in the northern part of the district in the fort and temples of Mahur, the temple and hot water springs of Onakdeo, where one of the earliest Marathi inscriptions on record has been discovered, and in the temples at Jainad, Chandur and Rajura.

The eastern parts of the Adilabad district, comprising the taluqs of Sirpur, Asifabad and portions of Rajura and Utnur were under the Gonds since at least the 15th century.

Sirpur seems to have been the frontier town of the Kakatiya rulers of Warangal. It finds prominent mention in the campaign of Malik Kafur, the general of Alauddin Khilji, and was stormed by him on his march to Warangal in 1310A.D.. The campaign has been graphically described by the court-poet Amir Khusro, who probably accompanied the army of Malik Kafur in the Deccan.

Adilabad district has 38 places of interest, few of them renowned or well-known, but

[p.4] some of them still deserving a brief note.

Adilabad : The town itself has a fine mosque of the later Muslim period, and a temple where an annual fair is held.

Asifabad: In Asifabad is a 16th century temple constructed in Indo-Aryan style. West of the military quarters archaeological operations have brought to light wood-fossils dating from the prehistoric period.

At Pangri and Pareshwar there are prehistoric sites where neolithic implements such as flakes, cores and similar objects are in a fair state of preservation. An Indo-Aryan temple dating from the 14th and 16th centuries is a prominent feature at Wakdi.

Boath : In Boath taluq there are prehistoric sites containing neolithic implements at Dhonor, Islapur and Kuntla. The Kuntla falls are also worth a visit.

In Gudi Hatnur there is a fine 17th century temple built in the Hemadpanthi style, while cairns and menhirs are relics of prehistoric burial grounds.

Gurg: At Gurg too there is a similar ancient cemetery comprising of stone circles.

Prochera: At Prochera there is a water fall near which a site containing neolithic implements has also been discovered. Samangadh and Sonagadh have 17th and 18th century forts built in the Muslim military architectural style, while at Sonagadh there are prehistoric burial grounds and neolithic sites also.

Kinwat: Mahur in Kinwat taluq is the most important historical place in the district. One of the most ancient temples in the Deccan is the temple of Renuka Devi at Mahur. Renuka Devi figures in the legend of Parasurama, who is said to have slain his mother at the bidding of his father. The goddess is also known as Ekaviradevi and figures prominently in Hindu mythology. The name Mathapur, from which the word Mahur is derived, refers to this goddess only. The place seems to have been important from very early times. The Dattatraya cult, which received great impetus in the medieval ages through

[p.5]: the Nathpanthi gosains of Matsyendranath and Gorakhnath cults, and through the author of the popular book Gurucharitra, has flourished in Mahur for the last eight centuries. Mahur has been described as one of the places where Dattatraya resides. The Mahanubhava cult, which grew in Maharashtra in the 13th century A.D. as a parallel to the Bhagavata cult, looked upon Mahur as one of its most important centres. Mahur came to be associated with many Mahanubhava saints who have enriched the spiritual and literary life of Maharashtra during and immediately after the period of the Yadava rulers of Devagiri. Even now there is a well-known Mahanubhava monastery at Mahur which draws people of that sect from far and near. The temple is 184 feet square and 54 feet high.

The gosains from the north established themselves in Mahur about five centuries ago. The founder of the Mahur monasteries of gosains, Sidhanath, seems to have flourished in the 14th century. There is a big temple known as Shikhar dedicated to Dattatraya under the management of gosain jagirdars of the place. Documents pertaining to grants, attributed to Aurangzeb and dating from 1696 A.D., are to be seen at Mahur in the custody of the gosains. West of Mahur, at the foot of a hill, are the rock-cut temples of Pandolena of distinct Brahminical style dating from 7th to 9th centuries. Besides the temples of Dattatraya and Shikhar, Mahur has a very ancient fort which has figured prominently in history. It seems to have been originally constructed by the Yadava rulers, but in the disturbed periods following it was held by the local chieftains until it fell to the Bahmani rulers in 1420 A.D. Mahur remained the head quarters of the province of Berar under the Bahmanis, and later on, when the local dynasty of Imad Shahis, established itself in Berar, it became their principal military stronghold. The place passed to the Moghuls along with the province of Berar in 1592 A.D. Local tradition still points to the ruins of a palace where Shah Jahan and his consort took refuge from the forces of Jehangir. These ultimately became a part of the State in 1724. Other features in Mahur are the Idgah, the Dargah of Sonapir and the Mavali tank.

Onakdeo: At Onakdeo there are hot springs whose sulphur waters have medicinal value. Popular legend associates them with Rishi Sarabhanga whose hermitage might have been near here. An annual jatra is held here in November.

The 18th century Dargah of Hazrat Sadruddin and Hazrat Badruddin is a notable feature of Sakhapur, while at Timurni the Dargah of Shah Lutfullah resembles a typical Pathan tomb.

Manikgadh: The strong fortress of Manikgadh, nearly 1,700 feet high, and situated in inaccessible territory, was held by the Gond Rajas of Chanda whose sway extended in the north to Nagpur and in the south nearly up to the Godavari. They maintained their independence till the end of the 16th century when they began to give nominal allegiance to the Moghuls, and then to the Marathas, to whom they finally succumbed in 1751 and lost the kingdom of Chanda. Tradition asserts that the Gond rulers began their rule in the 9th century, though this seems to have been based mainly on hearsay. Sirpur was their capital until the Rajas transferred it to Chanda in the 16th century. Today the Gonds are one of the principal tribes of Central India and retain to the full their tribal customs, traditions and manners. Every year Gonds and other tribes gather in their thousands at the annual fair at Keslapur, a sylvan village.

Nirmal: In southern Adilabad, the town of Nirmal, is of historic interest. It seems to have been held originally by the Velmas until it was taken in the latter part of the 18th century by Mirza Ibrahim Baig Zafruddaula, also known as Dhaunsa, a general of the Second Nizam. This noble man reconstructed the present fortress of Nirmal, the architects being Frenchmen in the Nizam’s service. The Saradmahal, which is now used, as a travellers’ bungalow, is on the site of the old buildings constructed by this chieftain. After his death his sons rebelled against the Nizam, who had to march upon Nirmal and reduce the fort. The estate was then confiscated and Nirmal became a part of the State...

Other places worth seeing in Nirmal are the Mahadeo temple and its sculptures, the 17thcentury Jami Masjid, and Ibrahimbagh with its gardens and fountains.

Today Nirmal is the home of a fine wood, lacquer and toy industry which has become known even out side India, and a visit to one of these cottage industry factories is instructive.

Adilabad has an average elevation of 264 metres. Kuntala Waterfall, Sahyadri mountains, rivers like the Godavari, Painganga, Pranhita, etc. The district shares its boundaries with Nizamabad and Karimnagar districts of Telangana to the south, Asifabad district on the east and with Nanded, Yavatmal and Chandrapur districts of Maharashtra on the West and North respectively. Adilabad is called as the "Gateway to South India" as it is the first town through which one passes upon entering Telangana from Maharashtra.

Mavala lake, built during the Nizam period, is located 6 km south side of Adilabad town. There is a park adjacent to the lake.