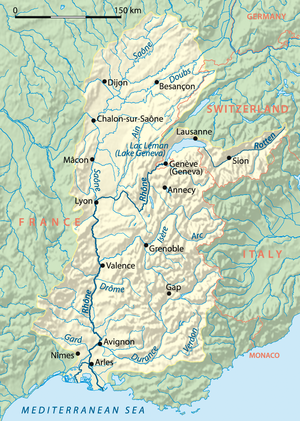 It is located on the eastern border of the country, towards the south. The region was named after the Rhône and the Alps mountain range. Its capital, Lyon, is the second-largest metropolitan area in France after Paris. Rhône-Alpes has the sixth-largest economy of any European region.

Rhône-Alpes is located in the east of France. To the north are the French regions of Bourgogne (Burgundy) and Franche-Comté, to the west it borders the region Auvergne, to the south it borders Languedoc-Roussillon and Provence-Alpes-Côte d'Azur. The east of the region contains the westernmost part of the Alps and borders Switzerland and Italy.

The highest peak is Mont Blanc, on the French-Italian border. The central part of the region comprises the river valleys of the Rhône and the Saône. The confluence of these two rivers is at Lyon. The western part of the region contains the start of the Massif Central mountain range. The region also borders or contains major lakes such as Lake Geneva (Lac Léman) and Lake Annecy. The Ardèche flows through the southwest portion of the region, where it has carved the deepest gorge in Europe.

As with the rest of France, French is the only official language of the region. Until the mid-20th century, Arpitan was widely spoken in the whole region, while many of the inhabitants of the south spoke varieties of Occitan; both are in steep decline in this region. There are immigrant populations from Armenia, Italy, North Africa, Poland and Portugal amongst other places.

Rhône-Alpes is made up of the following departments:

And, since 2015, Metropolis with territorial collectivity statute:

There are six main lakes in Rhône-Alpes

This list is from biggest agglomeration to the smallest:

Although there have been people in Rhône-Alpes since pre-historic times, the earliest recorded settlers of the region were the Gauls (Celts). Cities such as Lyon were founded by them and the region traded with both northern and southern Europe. Most of the area became part of Roman territory during the invasion of Celtic Gaul led by Julius Caesar and was at various times part of the regions of Lugdunensis and Gallia. Lyon itself became a major city in the Roman Empire.

The region, excepting Savoy, was part of the Merovingian and Carolingian Kingdoms before becoming a royal territory under the Capetians. As it became a royal territory early on in French history, its cultural, political and economic influences and developments paralleled those of greater France.