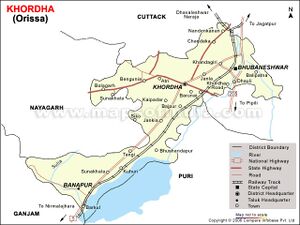 The larger islands lie between the sandbar and the lake, separated by shallow channels, and include Parikud, Phulbari, Berahpura, Nuapara, Nalbana, and Tampara. These islands, together with the peninsula of Malud, constitute the Krushnaprasad revenue block of Puri District. The north shore of the lake is part of Khordha District, and the western shore is part of Ganjam District.

The lake was formed due to the silting action of the Mahanadi River, which drains into the northern end of the lake, and the northerly currents in the Bay of Bengal, which have formed a sandbar along the eastern shore leading to the formation of a shallow lagoon. The area of the lake varies from 1165 km² in the monsoon season to 906 km² in the dry season, and is studded with numerous small islands.

Alexander Cunningham[2] writes that From the capital of Odra the pilgrim Xuanzang proceeded to the south-west for 1200 li, or 200 miles, to Kong-yu-to[3] This name has not been identified; but M. Vivien de Saint-Martin has, I think, indicated its true position in the neighbourhood of the Chilka lake. The capital was situated near a bay, or "junction of two seas," which can only be intended for the great Chilka lake and the ocean, as there is no other great sheet of water along this surf-beaten coast. Ganjam itself must therefore be the old capital. But as Ganjam is only 130 miles from Jajipur in a direct line measured on the map, or about 150 miles by road, I conclude that the pilgrim must have visited the hills of Udayagiri and Khandagiri and the town of Charitrapura, or Puri, on his way to Ganjam.

The open air and scenic natural flora and fauna of Krushnaprasad are an attraction for tourists and visitors. The lake is an important habitat and breeding ground for both resident and migratory and aquatic birds, most notably flamingoes. Migratory birds arrive in October from as far away as Siberia, Iran, Iraq, Afghanistan and the Himalaya, and generally stay until March. Part of the lake is protected by the Chilka Lake Bird Sanctuary, which harbors over 150 migratory and resident species of birds. The Nalaban Island within the lagoon is classified as a Bird Sanctuary under the wildlife protection act. The lake is also home to a diverse range of aquatic life, including 225 species of fish and the Irrawaddy Dolphin (Orcaella brevirostris). The rare limbless lizard Barkudia insularis is endemic to one of the lake's small islands.

Chilka Lake is associated with Chilka Gotra of Jat clan.

Back to Jats in Buddhism