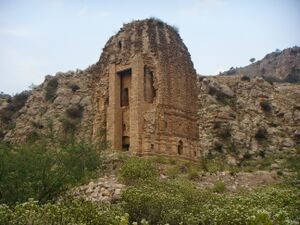 Amb (अम्ब) is ancient place in Pakistan mentioned at the time of the invasion of the region by Alexander the Great 's historian, Arrian. Amb is a small village in the hilly area of district Khushab. Historically it has been the capital of Amb State.[1] It was a princely state of the former British Indian Empire ruled over by chiefs of the Tanoli tribe descended from Mir Painda Khan. Amb continued as a Princely state of Pakistan until 1969, when it was incorporated into the North West Frontier Province (now Khyber-Pakhtunkhwa).

Amb is located in district Khushab of Hazara region in the North-Eastern part of the Khyber Pakhtunkhwa province of Pakistan.Its location is 34.18N and 72.55'E on the western bank of the Indus River.

Amb and its surrounding areas are supposedly mentioned at the time of the invasion of the region by Alexander the Great in the fourth century BC. Alexander's historian, Arrian, did not indicate the exact location of Embolina, the supposed progenitor of Amb, but it may have been in the vicinity of Aornos, Alexander's supply depot on the right bank of the River Indus.

The mention in Ptolemy's Geography of Embolina as an Indo-Scythian town situated on the Indus River supports this theory. Contemporary research and scholarship dismisses such vague notions and assertions and stresses that 'Ambolina/Embolina' might have been Greco-Roman pronunciations of an ancient settlement that existed in this location near the banks of the Indus River since early Hindu times[2] ; and it is most probable that this settlement was named as Ambhalina, or Ambalena, after the deity Amba Devi, also identified as Maha Devi, Shakti, Durga, Bhavani, Parvati and etc, several manifestations of the ancient Mother-goddess of Hinduism, who was specially venerated by the Gujjars and other tribes inhabiting the hill regions.[3]

In 1854 British frontier officer General James Abbott postulated that Aornos was located on the Mahaban range south of modern Buner District. He proposed, as had Ranjit Singh's mercenary General Claude Auguste Court in 1839, to recognise Embolina as the village of Amb situated on the right bank of the Indus eight miles east of Mahaban. Be as it may, this is probably the location from which the Nawabs of Amb took their title much later.[4]

Amb State, once known as Mulk e Tanawal (country/area of Tanawal), was the home of the Tanoli people. The early history of the region goes back to the centuries before the Mughal Empire, when in the early fourteenth century the Tanoli tribe conquered it and settled here on the banks of the Indus River and a wide area around it, which thus came to be known as Tanawal.

From early on, the Tanawal area by and large remained relatively free from the influence of the Mughals, Sikhs and British; and beyond paying occasional simple taxes to central authorities, the people of Tanawal had little or no contact with the outside world for a long period.

Hindwal Tanolis are of Pashtun origin. Painda Khan: Mir Painda Khan is famed for his staunch rebellion against Maharaja Ranjit Singh's governors of Hazara. He was the son of Mir Nawab Khan.

Alexander Cunningham[5] writes that....After the surrender of Peukelaotis, Arrian[6] relates that Alexander captured other small towns on the river Kophenes, and " arrived at last at Embolima, a city seated not far from the rock Aornos," where he left Kraterus to collect provisions, in case the siege should be protracted. Before he left Bazaria, Alexander, with his usual foresight, had despatched Hephaestion and Perdikkas straight to the Indus with orders to "prepare everything for throwing a bridge over the river." Unfortunately, not one of the historians has mentioned the name of the place where the bridge was made ; but as the great depot of provisions and other necessaries was formed at Embolima, I conclude that the bridge must have been at the same place. General Abbott has fixed Embolima at Amb-Balima on the Indus, 8 miles to the east of Mahaban ; and certainly if Mahaban was Aornos the identity of the other places would be incontestable. But as the identification of Mahaban seems to me to be altogether untenable, I would suggest that Ohind or Ambar-Ohind

[p.57]: is the most probable site of Embolima. Ambar is a village two miles to the north of Ohind, and it is in accordance with Indian custom to join the names of two neighbouring places together, as in the case of Attak-Banaras, for the sake of distinction, as there is another Ohin on the Jhelam. It must be remembered, however, that Embolima or Ekbolima may be only a pure Greek name, descriptive of the position of the place, at the junction of the Kabul river with the Indus, where it is placed by Ptolemy. In this case the claim of Ohind would be even stronger than before. That the bridge over the Indus was at, or near, Embolima, seems almost certain from the statement of Curtius, that when Alexander had finished his campaign to the west of the Indus by the capture of Aornos, "he proceeded towards Ecbolima;"[7] that is, as I conclude, to the place where his bridge had been prepared by Hephaestion and Perdikkas, and where his provisions had been stored by Kraterus. I infer that the depot of provisions must have been close to the bridge, because one guard would have sufficed for the security of both bridge and stores.

Tariq Amir[8] writes that Amb is a small village in the hilly area of district Khushab. Centuries ago it was an important Hindu religious centre. Two large temples still exist today. I visited this place on 3rd of March, 2009, and took some pictures Which you can see below. It is located at 32° 30' 30.33" N, 71° 56' 11.50" E. Exact date of construction perhaps is not known, but these were built somewhere in 9th or 10th century AD. One thing can be said with certainty that these were built before the invasions of Sultan Mehmood Ghaznavi. It is unnecessary to say that there is no official care or protection.

For an adventurous souls it is a place worth visiting. Person having interest in history also can learn a lot. The area is hilly and nearby Soon valley is famous for its beauty. With lush green meadows and a couple of lakes, it is a nice place for picnic as well. It also has many archaeological sites, which are yet to be properly explored. The highest mountain of Salt Range, the Sakesar, is just 4 kilometers away in the north. Sakesar itself is a wonderful place.

As per Imperial Gazetteer of India[9] It appears to have stripped off its ornamentation and now contains only a small lingam sunk in the floor. The outside of thebuilding is beautifully carved. The principal sculptures are a three headed figure with a female on his knee, probably intended to represent Mahadeva and Parvati, and on the south east side of the vimana, Kali. The sculptures both on the pillars of the hall and round the out side shows askill not surpassed by any temple in the presidency. A fair is held on the Shivaratri in magha (February-March). For a more detailed account see Indian Antiquary, vol.iii,p.316 ff; and Bombay Gazetteer, vol.xiv, pp.208.