Jats are follower many religions, these include Islam, Hinduism, Sikhism, and Christianity. The indologist Leonid Borisovich Alaev notes that the Jats of different religions can, without offending each other, sit together on the same charpai (daybed) and sofa.[1]

Jat Hindus only believe in that they are a ethnic group and race. All DNA studies confirm this.

Jats are tolerant in their religious outlook. They were previously ardent followers and supporters of Buddhism and Jainism, along with the Vedic religion, and its successor, modern Hinduism. Today they follow Hinduism, Islam, and Sikhism.

Ram Sarup Joon[2] writes that... The ancestor worship: Jats are very religious minded people. From the earliest times, they have believed in One God and have worshipped Him. Their mode of worship is to remember God and express their gratitude to Him at any and all times. They do not, and have never believed in rituals and worship of idols or evil spirits. That is why no religious shrine of any importance exists in the Jat area. They do, however, believe in a form of ancestor worship. Certain days and customs are observed to propitiate the dead. Every village has a little shrine called Bhaiyan. It is a modest samadhi of the first man who died after that village came into being.

On certain days women visit this shrine, light a Ghee lamp, fold their hands and say, "0 grand father look after our menfolk and cattle". Men seek his blessings before proceeding to perform on important task like house building, marriage or battle. Married couples pay their homage to him the very next day after the bride comes to her husband's home. This Bhaiyan worship is, however, carried out by individuals when and in whatever manner they choose. There is no fixed prayer, no rituals, no offering of money or foodstuff and no middlemanship of a priest.

Any religion, which preached oneness of God and condemned superstitions and idol worship easily

History of the Jats, End of Page-7

appealed to and was adopted by Jats in large numbers at different times. When Vedic Hinduism gave place to Pauranic idol worship religion began to be used by priests as a means of livelihood; superstitious and awe inspiring beliefs tales and rituals, were introduced in religion to frighten people into giving offerings to idols and priests who became self appointed agents of God; non Brahmins were debarred from studying Sanskrit and religious books to make them, easily exploitable and ignorant.

Jats became Buddhists: Jats became Buddhists and remained so long after other people in India went back to Brahmanism consequent to the decline of Buddhism. Buddhist influence is still prevalent amongst the Jats. They don't eat meat, do not wear the sacred thread, and do not stick much for untouchability as other Indians do and respect saints.

When Buddhism almost disappeared from India, Jats became devotees of saints. Dhanna Bhagat, Haridas, Garib Das and Nishchal Das, who were Jats, became prominent saints at this stage. The saints not being versed in Sanskrit could not however contend effectively with the Brahmins. 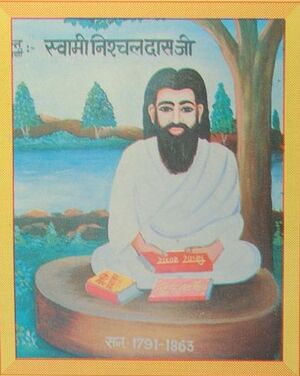 Saint Nishchal Das was born in village Kirohli District Rohtak in a prominent family of Dahiya Gotra. He was a promising boy and as he grew up his interest in learning Sanskrit, developed and he proceeded to Kashi for Sanskrit learning. But according to the rules of Dharam Shashtra in those days, non-Brahmins were not allowed admission in the Sanskrit Vidayala. The young boy disguised himself as a Brahmin's son and got admission for learning Sanskrit there. He declared his name as Nishchal Das.

The Guru was kind enough to this boy due to his brilliancy, as he was the best student in his class. When Nishchal Das completed his studies, he went to his 'Guru' to say 'Good Bye' and for his blessings. At the time of his farewell the Guru asked him to marry his daughter. Nishchal Das showed his reluctance on the plea that he considered the

History of the Jats, End of Page-8

Guru's daughter equivalent to his sister. The 'Guru' was not convinced. At last Nishchal Das had to reveal that he was a Jat by caste and not the son of Brahmin. The Guru remarked in anger, "The sin of educating a Jat lies on my head". He further cursed Nishchal Das; "May thou suffer incurable fever for ever".

Nishchal Das became a remarkable Saint and exposed the wrong dogmas of Puranic Mat. He wrote a new philosophy book Bichar Sagar which is considered as a comprehensive book on Vedic literature. On this account Sant Nishchal Das is counted amongst fore-ranking philosophers.

A large number of Jats became Sadhus. According 1911 census, the number of Jat Sadhus in Punjab was 37000. Jats however, could never be coerced into accepting the superstitious teachings of the Brahmins, who being the only chroniclers, slanderously labeled the Jats in historical records as atheists, 'rakshash' and low born. These ill feelings between Brahmins and Jats have continued unabated ever since.

When Sikhism came into being, almost all the Jats of Punjab became Sikhs. Some Jats had already adopted Islam and those in European countries had became Christians; thus reducing the population of Hindu Jats, the only people to continue calling themselves Jats, to its present small total. 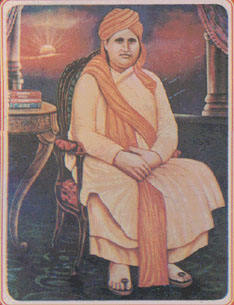 When the Saintly cult declined, Swami Dayanand Saraswati founded Arya Samaj on Vedic lines. All the Jats of Haryana, Rajasthan, Brij and Uttar Pradesh readily adopted Arya Samaj as their religion. The reader will notice that Jats have from time to time adopted only those religions, which preached only one God and condemned idol worship and superstitious beliefs. A Jat however remains a Jat

History of the Jats, End of Page-9

irrespective of his religion- In India, non Hindu Jats, although not calling themselves Jats any longer, have retained their Jat gotras. Most of the Christian Jats, except a few, have however, given up using their ancient gotra titles. This retention of the gotras has been the greatest single factor in retracing the lost history of the Jats.

Back to Jat social customs