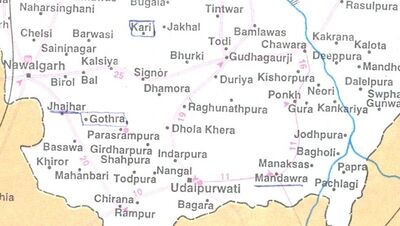 Location of Kari in Jhunjhunu district

Kari (कारी) is a village in Nawalgarh tehsil in Jhunjhunu district of Rajasthan state in India.

It is situated 17 kms west of Nawalgarh and is connected to nearby cities such as Jhunjhunu and Gudha by roads. It is a 400 year old village. The postal pincode for the village is 333311. [1]

Burdaks in 5 carts moved from village Kari near Nawalgarh and settled in Palthana. Palthana is a big village of Burdaks.

There are 20 shops in the village.

There is a government secondary school in the village.

Kari is a village near Modh and also near Dharani in Badhra sub tehsil of district Bhiwani.