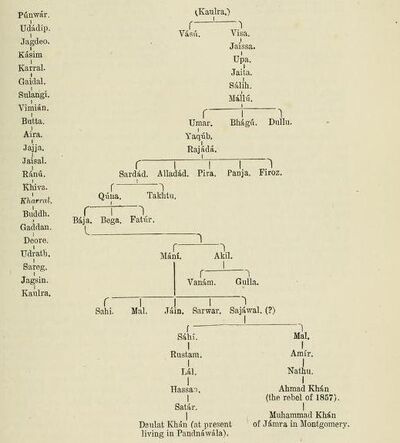 Originated from a person named Kharral in ancestry of Punwar.

H.A. Rose[8] provides us the following genealogy as given by the Mirasi at Pandndwala in the Chiniot Tahsil of the Jhang District : —

Ram Sarup Joon[9] writes that...about 70 Jat Gotras joined the Gujar force and started calling themselves Gujars. Kharal is one of them.

Kharal (खरल), lit. a mortar, a tribe found in the southern part of the Rachna Dodb : see Kharral.[10]

James Tod writes that Bhatti Chief Rao Lakhar was the contemporary of Kanardeo Sonigara, whose life was saved by his (Lakhar's) wife's knowledge of omens. Lakhur was ruled by this Rani, who was of the Soda tribe. She invited her brethren from Amarkot ; but the madman, her husband, put them to death, and threw their bodies over the walls. He was allowed to rule four years, and was then replaced by his son, Punpal. This prince was of a temper so violent that the nobles dethroned him, and recalled the exiled Jaitsi from Gujarat. Punpal had a residence assigned him in a remote quarter of the state. He had a son, Lakamsi, who had a son called Rao Raningdeo, who by a stratagem pointed out by a Khurl Rajpoot, took Maroth from the Johyas, and Poogal from the Thories, whose chief, styled Rao, he made captive ; and in Poogal he settled his family. [11]

Kharal named village is in Gurdaspur tahsil of Gurdaspur district in Punjab, India.

Back to Jat Gotras/Jat Villages