Mu'izz al-Din Muhammad (Persian: معزالدوله الدین محمد‎), born Shihab al-Din (1149 – March 15, 1206), also Shahabuddin Muhammad Ghori, was Sultan of the Ghurid Empire along with his brother Ghiyath al-Din Muhammad from 1173 to 1202, and as the supreme ruler of the Ghurid Empire from 1202 to 1206. Mu'izz al-Din was one of the greatest rulers of the Ghurid dynasty, and is credited with laying the foundation of Islamic occupation in India that lasted for several centuries. He reigned over a territory spanning over parts of modern-day Afghanistan, Bangladesh, Iran, India, Pakistan, Tajikistan, and Turkmenistan.

Mu'izz al-Din took the city of Ghazni in 1173 to avenge the death of his ancestor Muhammad ibn Suri at the hands of Mahmud of Ghazni and used it as a launching-pad for expansion into northern India.[1] In the meantime, he assisted his brother Ghiyath in his contest with the Khwarazmian Empire for the lordship of Khorasan in Western Asia.

In 1175 Mu'izz captured Multan from the Hamid Ludi dynasty which was a Pashtun but were alleged to be un-Islamic on the account of their association with Ismailite Shi'iate sect and also took Uch in 1175. He also annexed the Ghaznavid principality of Lahore in 1186, the last haven of his Persianized rivals.[1] After the death of Ghiyath in 1202, he became the successor of the Ghurid Empire and ruled until his assassination in 1206 near Jhelum in modern-day Pakistan.[2]

A confused struggle then ensued among the remaining Ghuri leaders, and the Khwarizmi were able to take over the Ghurid Sultanate in about 1215. Though the Ghurids' empire was short-lived and petty Ghurid states remained in power until the arrival of Timurids, Mu'izz's conquests laid the foundations of Muslim rule in India. Qutb-ud-din Aibak, a former slave (Mamluk) of Mu'izz, was the first Sultan of Delhi.

Mu'izz was born in 1149 in the Ghor region of Afghanistan. The exact date of his birth is unknown. His father, Baha al-Din Sam I, was the local ruler of the Ghor region at the time.[3] Mu'izz also had a younger brother named Ghiyath al-Din Muhammad. During their early life, Mu'izz and Ghiyath were imprisoned by their uncle Ala al-Din Husayn, but were later released by the latter's son Sayf al-Din Muhammad.[4] When Sayf died in 1163, the Ghurid nobles supported Ghiyath, and helped him ascend the throne. Ghiyath shortly gave Mu'izz control over Istiyan and Kajuran. However, the throne was challenged by several Ghurid chiefs; Mu'izz aided Ghiyath in defeating and killing a rival Ghurid chief named Abu'l Abbas.

Ghiyath was then challenged by his uncle Fakhr al-Din Masud, who claimed the throne for himself, and had allied with Tadj al-Din Yildiz, the Seljuq governor of Herat, and Balkh.[5] However, the coalition was defeated by Ghiyath and Mu'izz at Ragh-i Zar. The brothers managed to kill the Seljuq governor during the battle, and then conquered Zamindawar, Badghis, Gharchistan, and Guzgan. Ghiyath, however, spared Fakhr al-Din and restored him as the ruler of Bamiyan. Mu'izz, after returning from an expedition from Sistan, was shortly awarded with Kandahar by his brother. In 1173, the two brothers invaded Ghazni, and defeated the Oghuz Turks who had captured the city from the Ghaznavids. Mu'izz was then appointed as the ruler of Ghazni.[5][6]

In 1175, the two brothers conquered Herat from its Seljuq governor, Baha al-Din Toghril, and also managed to conquer Pushang. The ruler of Sistan, Taj al-Din Harb ibn Muhammad, shortly acknowledged the sovereignty of the Ghurids, and so did the Oghuz Turks dominating Kirman.[7]

During the same period, the Khwarazmian Sultan Shah, who was expelled from Khwarezm by his brother Tekish, took refuge in Ghor and requested military aid from Ghiyath. Ghiyath, however, did not help the latter. Sultan Shah managed to get help from the Kara-Khitan Khanate, and began plundering the northern Ghurid domains.

After having helped his brother in expanding the western frontiers of the Ghurid Empire, he began to focus on India. He shortly invaded India, first capturing Multan from a fellow the Qarmatians in 1175–76. He then shortly captured Uch. Three years later he invaded Gujarat and was roundly defeated by the Hindu King. However, Mu'izz was able to take Peshawar and Sialkot. In 1186, Mu'izz, along with Ghiyath, ended the Ghaznavid dynasty after having captured Lahore and executed the Ghaznavid ruler Khusrau-Malik.[5][6][8]

Invasion of Gujarat and the neighboring regions

Mu'izz's campaign against the Muslim rulers of Multan in 1175 had ended in victory.[9] He turned south, and led his army from Multan to Uch and then across the desert towards the Gujarat capital of Anhilwara (modern Patan). In 1178, Muizz suffered a defeat at the battle of Kayadara (Gujarat), during his first campaign against an Indian ruler in India.[10] Gujarat was ruled by the young Indian ruler Bhimdev Solanki II (ruled 1178–1241), although the age of the Raja meant that the army was commanded by his mother Naikidevi. Mu'izz's army had suffered greatly during the march across the desert, and Naikidevi inflicted a major defeat on him at the village of Kayadara (near to Mount Abu, about forty miles to the north-east of Anhilwara).[11] The invading army suffered heavy casualties during the battle, and also in the retreat back across the desert to Multan.

Mu'izz shortly returned to Ghor, and along with the rulers of Bamiyan and Sistan, aided his brother Ghiyath in defeating the forces of Sultan Shah at Merv in 1190. He also annexed most of the latter's territories in Khorasan.

In 1191, Mu'izz proceeded towards Hindustan through the Khyber Pass in modern day Pakistan and was successful in reaching Punjab. Mu'izz captured a fortress, Bathinda in present-day Punjab state on the northwestern frontier of Prithvīrāj Chauhān's kingdom. After appointing a Qazi Zia-ud-Din as governor of the fortress,[12] he received the news that Prithviraj's army, led by his vassal prince Govind Tai were on their way to besiege the fortress. The two armies eventually met near the town of Tarain, 14 miles from Thanesar in present-day Haryana. The battle was marked by the initial attack of mounted Mamluk archers in which Prithviraj responds by counter-attacking from three sides and dominates the battle. Mu'izz mortally wounds Govind Tai in personal combat and is wounded himself, whereupon his army retreats.[13]

On his return to Ghazni, Mu'izz made preparations to avenge the defeat. According to Firishta, the Rajput army consisted of 3,000 elephants, 300,000 cavalry and infantry, most likely a gross exaggeration.[14] Minhaj-i-Siraj, stated Mu'izz brought 120,000 fully armored men to battle.[15]

Prithviraj had called his banners but hoped to buy time as his banners (other Rajputs under him or his allies) had not arrived. Before the next day, Mu'izz attacked the Rajput army before dawn. Rajputs had a tradition of fighting from sunrise to sunset. Although they were able to quickly form formations, they suffered losses due to surprise attack before sunrise. Rajput army was eventually defeated and Prithviraj was taken prisoner and subsequently executed.[16]

When the state of Ajmer failed to fulfill the tribute demands as per the custom after a defeat, Qutub ud Din Aibak, in 1193 took over Ajmer[17] and soon established Ghurid control in northern and central India.[18] Rajput kingdoms like Saraswati, Samana, Kohram and Hansi were captured without any difficulty. Finally his forces advanced on Delhi, capturing it soon after the Battle of Chandwar, a surprise attack on Raja Jaichand of Kannauj (who was originally an ally who had assisted Mu'izz in defeating Prithviraj Chauhan). Within a year, Mu'izz controlled northern Rajasthan and the northern part of the Ganges-Yamuna Doab.[19] The Kingdom of Ajmer was then given over to Golā, on condition that he send regular tributes to the Ghurids.

Mu'izz returned west to Ghazni to deal with the threat to his western frontiers from the unrest in Iran, but he appointed Aibak as his regional governor for northern India. His armies, mostly under Turkic generals, continued to advance through northern India, raiding as far east as Bengal. Aibak ransacked Ayodhya temples in 1193, followed by his conquest of Delhi. An army led by Qutb al-din Aibak, Mu'izz's deputy in India, invaded in ca. 1195–97 and plundered Anahilapataka.[20]

On his way back to Ghazni, his caravan rested at Dhamiak near Sohawa (which is near the city of Jhelum in the Punjab province of modern-day Pakistan). He was assassinated by Khokhar Jats on March 15, 1206, while offering his evening prayers. Ram Lal Khokhar (Khokhar Jat) killed Muhammad Ghori on 15 March 1206.

Hasan Nizami and Ferishta record the killing of Mu'izz at the hands of the Gakhars. Ferishta considers the Ghakars to be the Khokhars. Other historians have also blamed Mu'izz's assassination to a band of Hindu Jat Khokhars.

All the historians before the time of Ferishta agree that the Khokhars, not the Gakhars, killed Mu'izz.[22]

Some also claim that Mu'izz was assassinated by a radical Ismaili Muslim sect.[23]

In Hindu Folklore, the death of Mu'izz was caused by Prithviraj [24] but which is not borne out by historical documents.[25][26][27] This is described in the article Prithviraj Raso. Even today Afghans vent their anger by stabbing on the grave of Prithviraj Chauhan, as according to them, Prithviraj had killed Mu'izz.[28][29] Sher Singh Rana visited Afghanistan to trace the grave of Prithviraj Chauhan. He dug Chauhan's "grave" and collected sand from it. This incident created sensation in Indian news and public media – as he said he did it to get back India's pride & respect.[30][31]

As per his wishes, Mu'izz was buried where he fell, in Damik. 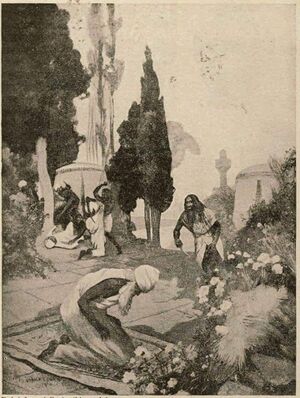 On his way back to Ghazni, his caravan rested at Dhamiak near Sohawa located near the city of Jhelum. He was assassinated on Mar 15, 1206, by Khokhar Jats while offering his evening prayers.

Ram Sarup Joon[32] writes that in Jabulistan there is a big 'Khap' of Gaurzai (derivative of Gaur). Ghazni's old name was Gazni and was founded by the Madrak Jat Raja Gaj. After the death of Mahmood Ghazni, Gaurs again came into power. Their capable ruler planned to extend his empire into India to revive the ancient glory of Gaurs who had earlier ruled Hissar and Ajmer Areas. The ancestors of Gaj had also ruled Sialkot and Quetta. Ruins of a fort Bala-e-Hissar still exist in Afghanistan.

King Jai Chand was at daggers drawn with Prithvi Raj. He continued a clash between Mohammed Gauri and Prithvi Raj, and promised to support Mohammed Gauri with men and material. Mohammed Gauri jumped at the proposal. Unlike Mahmood Ghazni his aim was not more plunder. He wanted to capture the throne of Delhi and to establish his empire there. He invaded in 1192.

Prithvi Raj was a brave Rajput ruler but after a marriage in his old age he had also became indolent. His army consisted of staunch supporters of Brahmanism and was therefore well united. He, however, knew that his army could not stand against the fanatic Army of Mohammed Gauri infused with the doctrine of Islam.

Prithvi Raj, therefore, wisely appealed to the public, including Jats, for help. It has been mentioned in the chronicles of Jat 'Sarv Khap', which are still reserved with Chaudhry Qabul Singh Shoron Distt Muzaffarnagar, Uttar Pradesh, that the Jat Sarv Khap, reinforced Prithvi Raj with 22,000 brave Jats, who contributed a great deal for Prithvi Raj to win the day. Mohammed Gauri was determined, and after making up his shortcomings attacked Prithvi Raj again in 1192, with a mighty force. The Jat Sarv Khap again offered 18,000 Jats to Prithvi Raj who positioned them on one flank of his force. When the battle started they pushed Gauri's army for 15 miles and almost turned his flank. But the centre of Prithvi Raj's Army was unable to withstand the attack and allowed Gauri to penetrate. Mohammed Gauri won. While he was triumphantly returning to Ghazni, the Jats again hurled themselves against him with 15,000 brave and furious Khokar Jats, who defeated and beheaded Mohammed Gauri near Multan, (Sindh).