Odin (ओडिन) is a major god in Norse mythology and the ruler of Asgard. Homologous with the Old English "Wōden" and the Old High German "Wôdan". Thakur Deshraj [1] considers Woden to be an Uddhava clan Jat.

James Tod [3] writes that ....The ancient Cimbri, who went west with Odin's horde of Jats, Chattis, and Su , were probably the tribes descended from Camari, the son of Turk.

Thakur Deshraj has mentioned in his book on History of Jats “Jat Itihas” (Hindi) (1934) that the country Assyria gets its name from Asiagh gotra Jats. The origin of word Asiagh is from Sanskrit word ‘Asi’ meaning sword. According to Kautilya the people who depended on ‘Asi’ (sword) for their living were known as Asiagh. The Asiaghs moved from Asirgarh in Malwa to Europe. Those who settled in Jangladesh were called Asiagh and those who moved to Scandinavia were known as Asi. Jats entered Scandinavia around 500 BCE and their leader was Odin. James Tod considers Odin to be derived from Buddha or Bodan. The Asi Jats founded Jutland as their homeland in Scandinavia. The religious book of Scandinavia ‘Edda’ mentions that the ancient inhabitants of Scandinavia were Jats or Jits who were Aryans known as Asi people and came to this land from Asirgarh.

Asirgarh is a site of an ancient fort situated in Burhanpur district of Malwa region in Madhya Pradesh, India. Thakur Deshraj further quotes Scandinavian writer Mr Count Johnsturn who says that Scandinavians came from India. According to James Tod Scandinavia is derived from Sanskrit word ‘Skandanabha’.

Hukum Singh Panwar (Pauria)[4] writes.... The migrations of the Indus valley people to Mesopotamia, also known as Sumeria in history, can be traced in some detail. From an Indus region, known in the contemporary period as Odin164, (a distortion165 of Udayana), Panis migrated to Iraq in about 3500 B.C.166 Hall167 and Saggs167a also affirm the migration of highly civilized people from the Indus valley to Sumeria in the fourth millennium B.C. These people were called Sumerian because they derived their new name from Su-Meru, the Seat of gods168. They were the mercantile people of the Indus Valley as mentioned169 in the Rigvedic literature.

Invaders from Scandinavia reached Orkney by the 9th century, bringing a complex theology that they imposed on the preexisting Orcadian monuments; at least according to local legend. For example, the Ring of Brodgar and the Standing Stones of Stenness were allegedly known as the Temple of the Sun and Moon respectively.[5]

Young people supposedly made their vows and prayed to Wōden at these "temples" and at the so-called "Odin Stone" that lay between the stone circles until it was destroyed by a farmer in 1814. [6]

Others view these fanciful names with scepticism; Sigurd Towrie suggests that "they were simply erroneous terms applied by the antiquarians of the 18th or 19th centuries – romantic additions, in the same vein as the infamous "Druid's Circle" and "Sacrificial Altar"."[7] At the very least, several of the stones at Brodgar contain runic carvings that were left by Nordic peoples.[8] These include the name "Bjorn" and a small cross as well as an anvil.[9] 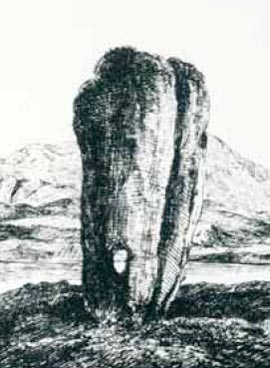 Let us imagine, then, families approaching Stenness at the appointed time of year, men, women and children, carrying bundles of bones collected together from the skeletons of disinterred corpses–skulls, mandibles, long bones–carrying also the skulls of totem animals, herding a beast that was one of several to be slaughtered for the feasting that would accompany the ceremonies..... — Aubrey Burl, Rites of the Gods, 1981.[10]

Even in the 18th century the site was still associated with traditions and rituals, by then relating to Norse gods. It was visited by Walter Scott in 1814. Other antiquarians documented the stones and recorded local traditions and beliefs about them. One stone, known as the "Odin Stone" which stood in the field to the north of the henge,[11] was pierced with a circular hole, and was used by local couples for plighting engagements by holding hands through the gap. It was also associated with other ceremonies and believed to have magical power.[12] There was a reported tradition of making all kinds of oaths or promises with one's hand in the Odin Stone; this was known as taking the "Vow of Odin".[13]

In December 1814 Captain W. Mackay, a recent immigrant to Orkney who owned farmland in the vicinity of the stones, decided to remove them on the grounds that local people were trespassing and disturbing his land by using the stones in rituals. He started in December 1814 by smashing the Odin Stone. This caused outrage and he was stopped after destroying one other stone and toppling another.[14]

The toppled stone was re-erected in 1906 along with some inaccurate reconstruction inside the circle.[15]

In the 1970s, a dolmen structure was toppled, since there were doubts as to its authenticity. The two upright stones remain in place.[16]

A picture of the Stones of Stenness features on the cover of Van Morrison's album The Philosopher's Stone, and the Odin stone is depicted on Julian Cope's album Discover Odin.