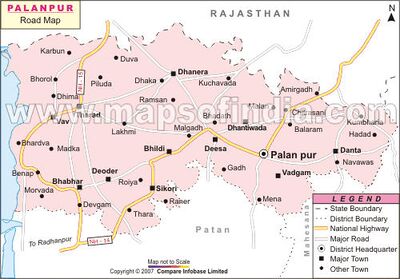 Legend has it that Palanpur was first settled by a certain Prahladan, belonging to the Paramara clan, who ruled the region of what is now Mount Abu. It was known as Prahladanpur in history of Jainism.

The town was once heavily fortified with seven gates providing the only means of thoroughfare; these are now in ruins. Some of the gates known are called as follows "Shimla Gate", "Delhi Gate", "Meera Gate" and "Gathaman Gate(Darwaja)". Of much more recent vintage are the other monuments that dot the town: the "Keertistumbh" or "victory tower" was erected in the 1930s, as were the Jorawar palace(Currently used as Judicial Court) and the Balaram palace.

Palanpur city has several temples dedicated to Hinduism and Jainism. It is famous for its relation to Jainism.