Note - Please click → Ratanpura for details of similarly named villages at other places. 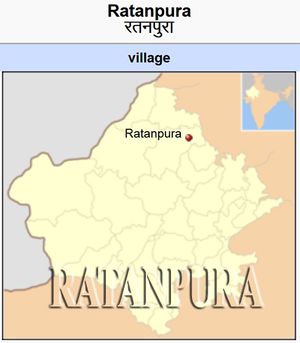 Location of Ratanpura in Rajasthan , India 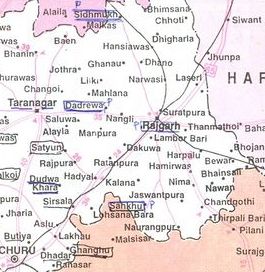 Location of villages around Rajgarh Churu

Ratanpura (रतनपुरा) is a village in Rajgarh tehsil of Churu district in Rajasthan.This Village is established in 1948.It is situated in 45 km northeast direction of Churu city and 17 km southwest of Rajgarh.

It is situated in 45 km northeast direction of Churu city and 17 km southwest of Rajgarh. Its neighbouring villages are Jharsar Chhota, Amarpura, Hadiyal, Dokwa etc. 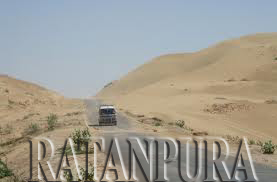 Ratanpura is situated in the Thar desert and has a hot desert climate with very little rainfall and extreme temperatures. In summer temperatures can exceed 45 °C, and during the winter they may dip below freezing.

Ratanpura is considered to be a progressive village of the region. Education Level of this village is excellent. Schools of this Village made many Engineer , Doctors , Officers , Teacher , Ethletics and much Players (national ,international level). List of Schools is below :-

Ratanpura is situated between Rajgarh or Churu on National Highway 65 (NH 65).Bus or taxi available for Ratanpura from Both Station.

Ratanpura is situated on the main Delhi-Bikaner rail link. The railway station of Ratanpura is known as Hadyal named. It takes around 3–4 hours from Delhi (en route you would cross major stations like Gurgaon, Rewari, Mahendragarh, Loharu). Till 2011 the route had metre gauge track that was converted to 1,676 mm (5 ft 6 in) broad gauge. Several new trains now connect Ratanpura or Hadyal to major cities Delhi, Bikaner, Jaipur, Degana, Sri Ganganagar, Hisar, Hanumangarh.

The nearest airports are Delhi Airport and Jaipur Airport.

All people of Ratanpura village belong to Hindu religion. There is temple of Hanumanji ,Thakur ji , Sani maharaj and Some others.