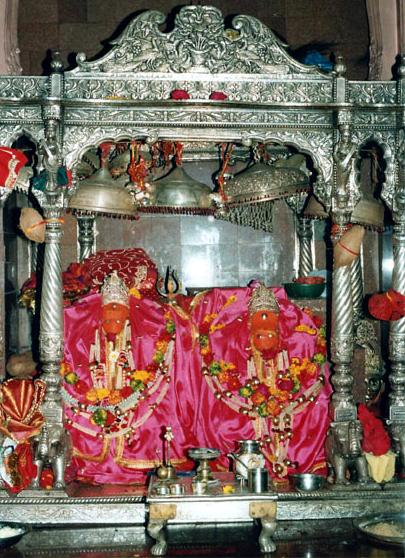 Shakambhari Devi (शाकम्भरी) is an incarnation of Ishwari, consort to Shiva. She is the divine mother, 'The Bearer of the Greens'. In Sanskrit it consists of Shaka+Ambhari. Shaka=vegetables and Ambhari= means one who wears or bears to the hungry. It means one who nourishes on vegetables.

Vana Parva, Mahabharata/Book III Chapter 84 states in verses 11-15 as under: Shakambari - One should next proceed, O king, to the excellent spot of the Goddess celebrated over the three worlds by the name of Sakamvari. There, for the space of a thousand celestial years, she of excellent vows, month after month, had subsisted upon herbs, O king of men! And attracted by their reverence for the Goddess, many Rishis with wealth of asceticism, came thither, O Bharata. and were entertained by her with herbs. And it is for this that they bestowed on her the name of Sakamvari. O Bharata, the man who arriveth at Sakamvari, with rapt attention and leading a Brahmacharya mode of life and passeth three nights there in purity and subsisting on herbs alone, obtaineth, at the will of the goddess, the merit of him that liveth upon herbs for twelve years.

Major Temples of Shakambhari are located, include: