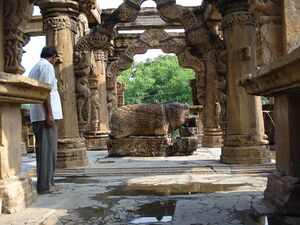 Nava Torana Temple of Varaha at Khor in Neemach

James Tod [1] writes that The Indo-Scythic tribes were designated by the names of animals. The Barahas are the hogs ; the Numries, the foxes ; Takshaks, the snakes ; Aswas or Asi, the horses, etc.

Nava Toran temple at village Khor near Vikram Cement campus is an important remnant of eleventh century temple which consists of ten decorative arches arranged in two rows - one length wise and the other width wise crossing each other at the centre and supported on a pair of pillars in the hall and porches. The temple is decorated with leaf shaped borders, heads of makaras, garland bearers etc. There is a statue of Varaha at the centre of the temple.

Sandhya Jain[2] writes that tribal elements can be traced to the very core of Hindu dharma. Vishun's incarnation as Varaha and Narasimha bear the strong impress of the forest and reinforce tribal inputs into classical dharma. A L Basham[3] believes Varaha probably came from the people of eastern Malwa. Through out the tribal belt , Varaha and Narasimha are worshipped as uniconical symbols.

Varaha (वराहा) people mentioned in Mahabharata and Ramayana may be identified with Jat Gotra - Varaha (वराहा).

Back to Jat Gotras/Jat Deities