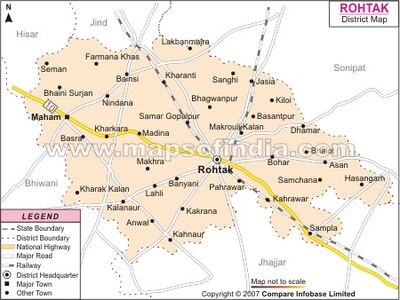 Location of Bhalot in Rohtak District

It is at a distance of 9 KM from Rohtak on Rohtak-Sonepat Road.

Notable persons and their contribution

The village is the ancestral village of late Rai Bahadur Lal Chand Phogat who was one of the foremost political personalities of the 1st half of 20th century, in erstwhile Punjab. He was a contemporary of Sir Chhotu Ram and a leading social reformer. Married into a Sikh Jat family of Punjab, he died in the 1960s and was survived by 3 sons and a daughter. The eldest son late Capt. Raghuvendra Singh was the founder of the DLF Empire of Delhi and died some years ago at the ripe old age of 90 plus. He is survived by his daughters and his son-in-law Kushal Pal Singh Tewatia , who today heads the DLF. The middle son late Kunwar Shamsher Singh was an outstanding officer of the British time IP and served as Inspector General of Police (prior to DGP) in Punjab in the 1970s. The youngest son Ch. Devinder Singh is a well-known businessman of Chandigarh with interests in Punjab and Haryana. The Phogats of Bhalaut still nurture close ties with the main Phogat khap of Charkhi Dadri area in Bhiwani district from where they migrated originally to settle in Rohtak district.

There is a Bhaloth village in Rajasthan with same name situated on Buhana - Mahendraghrah road in Jhunjhunu district.