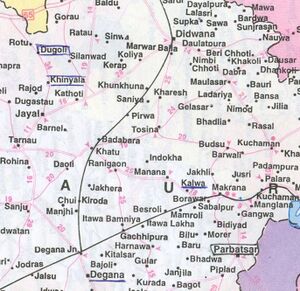 Location of Dabda in Nagaur district

Dabda or Dabra (डाबड़ा) is a village in Didwana tehsil of Nagaur district in Rajasthan. The village is known for The Dabra farmers movement-1947 for abolition of Jagirs in Rajasthan.

It is about 5 km east of village Maulasar on Didwana - Kuchaman road.

Background of The Dabra farmers movement

The Jats in Bikaner, Jaipur and Jodhpur States are a formidable factor. The Jat community was the most numerous and largest single community in the Princely States of Bikaner, Jaipur and Jodhpur. The Maharajas, minor estates holders (feudatory) and their Kinsmen (the jagirdars) oppressed and suppressed the Jat Kisans in various manners forcing them to carry out agitations. Unfortunately the Imperial power (British) were always there to provide them much needed support. In the Shekhawati area of Sikar, Khetri, Nawalgarh, Dundlod, Bissau etc. the Jat Kisans carried out prolonged agitations against the feudal oppression form 1922 to 1930, 1930 to 1938 and from 1938 to 1947. The feudal lords grudgingly yielded and some concessions were wrested from them. The worst was exploitation in the name of “Begar” under which the Jat Kisan had to render free services by way of these feudal lords. They had to provide not only free labour but also their bullocks and carts too to their feudal lords. In Jodhpur State, 84% of the kind was parceled out in Jagirs (feudal landlords) most of whom were Kinsmen of the Maharaja. Several of them held revenue and magisterial powers over their peasants against which there was no appeal. [2]

A glance at the ‘Census Report of Marwar (Jodhpur State) for 1941’ [3], would make one aware of the size of the Jat community in the State. The total population of the State was 25,55,904 out of which 3,54,342 or approximately 14% were Jats. In the Jat belt extending from Mallani paragana (present Barmer District bordering Sindh province), Jodhpur paragana (Jodhpur district) Merta, Nagaur, Didwana and Parabatsar paraganas (present Nagaur district) the Jats formed nearly 30% of the total population, not an insignificant proportion by any standard. Their capacity to create trouble in the State can, therefore, be easily visualized. If the Jats of Punjab formed the crux of the Pakistan problem, the Jat community in Marwar (Jodhpur State) was no less the crux of problem in Marwar in the even the Maharaja acceded to Pakistan. As in Punjab, in Marwar in the event of the Maharaja acceded to Pakistan. As in Punjab here also the question posed was, ‘Would this robust community meekly’ accept the accession of Jodhpur State to Pakistan? They would certainly resist it by force. This fact is also borne out by the advice rendered by Lord Mountbatten to the Maharaja that were he to do so serious communal trouble in the state would be the inevitable consequence. V.P. Menon has quoted in the his book “ the integration of Indian States" that The community which could create trouble was none other than the Jat community which would have resisted this decision by force. [4]

The Marwar Kisan Sabha was organised to ventilate grievances of the predominant Jat Kisans. The Marwar Kisan Sabha held its annual session in 1943 where Chowdhary Sir Chhotu Ram then Revenue Minister in Punjab, was invited as the Chief Guest. The Main Resolution among others that was settlement operations in the Jagir areas which was vehemently opposed by the leading Jagirdars. The on-going Kisan agitation finally culminated in what is known as “Dabra Kand’ a veritable Jallianwalla Bagh. [5]

The peasant movement which was being orgainsed by the Marwar Kisan Sabha and the Marwar Lok Parishad jointly was a parallel movement to that of the national movement going on in British India whose aims were common i.e. to free the country form foreign rule. To mobilize the peasants, meetings under the joint auspices of Marwar Lok Parishad and Marwar Kisan Sabha were held at various place in the Jat belt and such meeting was fixed at village Dabra in Nagaur district for 13th March 1947. The Jagirdars got together in a bid to crush the political awakening among the Kisan and the black deed at Dabra was planned. In this the Jagirdars had the blessings and active support of the Maharaja. The Kisan Sammelan was to have been addressed jointly by leaders of Marwar Lok Parishad and Kisan Sabha. The jagirdars had collected nearly a thousand Rajputs of the surrounding area and had begun massive preparations three day in advance of the Kisan gathering to teach a lasting and final lesson to the agitating peasantry and the Jats in particular.

The Jat troops of Jodhpur Sardar infantry, who were on leave at that time having returned from Hong Kong, participated in large number in this gathering. As soon as the peasants started congregating on the morning of 13th March, 1947 they were attacked by the Jagirdars and their henchmen wielding guns and swords. These armed ruffians started to terrorize the village, ransacking and putting fire to the thatched huts. In this premeditated and murderous attack five Kisans, four of them Jats were killed.

Among the killed, three Jats were soldiers from Jodhpur Sardar infantry namely

Subedar Kishna Ram was blinded during this attack while protecting the defenseless villagers. Bodu Ram had both his arms broken.

Those five Jats who became martyr in Dabra movement were

Sarvashri Mathurdas Mathur, Dwarkadas Purohit , Chhagan Raj Chopasniwala, Kishan Lal Shah of the Lok Parishad and Narsinh Kachhwaha of the Kisan Sabha received grave and serious injuries. They were dragged into the Jagirdar’s Kot (Fort) and were left there for dead. Even women were not spared and many of them received grievous injuries. Smt. Tulsi had her legs cut off by sword blows and Smt. Kesar also received grave injuries. The State civil and police authorities swung into action and registered cases of rioting, rebellious conduct and murderous assault against the unarmed and peaceful but gravely injured victims and prosecuted them. [6]

It was also commonly held that this black deed known as ‘ Dabra Kand’ had been carried out with the blessings of the Maharaja. This has been narrated poignantly by Shri Ram Kisen Kalla in his book “ Dabra Ki Kahani, Usi Ki Jabani’ (Hindi). A martyrs’ column has been erected in the village upon which names of those killed have been inscribed. Sobhag Mathur in his book “ Struggle for Responsible Government in Marwar” writes: “The Dabda Kand was one of the blackest deeds of Marwar feudalism”. This black deed had evoked widespread protest both in the press and in public. The weekly paper “Praja Sewak” of Jodhpur condemned it in unequivocal language. The Bombay weekly ‘vandematram’ while holding the Maharaja responsible for this tragedy declared, “it will shake the foundation of his throne.” ‘Janambhumi’ another Bombay weekly said, ‘The blood spilled in Dabra will grow into the plant of freedom in which the Rajas and Nawabs will have no place’. ‘the Lokvani’ of Jaipur described the tragedy at Dabra as “ Sensational and an armed attack on non violent persons as disgrace to mankind.” The Regional Committee of the All India States peoples Conference for Rajputana adopted a resolution against jagirdari repression, condemned the “Dabra Kand” and blamed the Maharaja and his Government”. The Dabra Kand was a veritable Jallanwalla Bagh and indeed proved to be a watershed in the peasant agitation in Jodhpur State. [7]

In Village Dabra there are families of Sohu Jats. One of them Sh Chaudhary Roopa Ram Sohu, Engineer & Ex-Sarpanch of Dabra Gram Panchayat. He organised Dabra Shahid Diwas in remembrance of 5 Jat Freedom Fighters who were killed by Thakur of Dabra on 13th March, 1947. His son Sh. Harish Chandra Sohu is Geologist & posted in G.S.I. they are originally from Dhansiya's (Churu) Sahus. 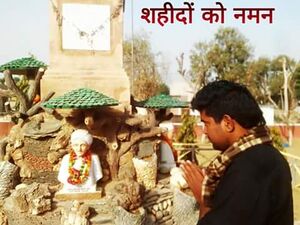 A memorial was erected in village Dabra in memory of martyrs who lost their lives in the Dabra farmers movement fighting with the Jagirdars. This was inaugurated by then Central Agricultural Minister Sh Panaa Rao Deshmukh on 13 March 1955. A Kisal Mela is organized here every year on this date.(Ref - Jat Parivesh, March-2015, p.6)