They are said to be descendants of king Lall or Lalla(लल्ल). [5] Lol is a Gotra of the Anjana Jats in Gujarat.

From around 1800 BCE until the 9th century the lake supported a thriving Tocharian culture. Archaeologists have discovered the buried remains of settlements, as well as several of the Tarim mummies, along its ancient shoreline. Former water resources of the Tarim River and Lop Nur nurtured the kingdom of Loulan since the second century BCE, an ancient civilization along the Silk Road, which skirted the lake-filled basin. Loulan became a client-state of the Chinese empire in 55 BCE, renamed Shanshan. Marco Polo in his travels passed through the Lop Desert.[6]

Niya became part of Loulan Kingdom by the third century. Towards the end of the fourth century it was under Chinese suzerainty, later it was conquered by Tibet.[7]

It is to be noted that Lopnor or Lop Nor or Lop Nur is a former salt lake in China, now largely dried-up. Its ancient name was Shen-shen.[8] The mention of Kingdom of Loulan on Lop Nur shows that these people inhabited that country. From there they seem to have migrated to areas around Sambhar Lake.

Jain sources mention that in ancient times Narayana village, in Phulera tahsil of Jaipur District situated near Sambhar Lake, was known by the names Naranayana (नरानयण), Naranaka (नाराणक) etc. It is mentioned in KB (p.25). It is recognized as a tirtha in Sakalatirthastotra of Siddhasena. Dhanapala in his Satyapuria Mahavira Utsaha mentions the Mahavira temple of this place, which according to Bijolia Inscription of V.S.1226 (1170 AD), was built by an ancestor of Lolaka (लोलक), who is mentioned as living in that year. It therefore appears that this temple was built in early 11th century. K.C. Jain mentions the date V.S. 1009 (952 AD) on a standing image of Parshvanatha of this place. [9]

It may be noted that here Lolaka is the sanscritized form of Jat clan Lol. This evidence proves their presence there as rulers in 10th century AD. This fact is further confirmed by the following description of Thakur Deshraj.

Rajatarangini[10] tells that in the reign of Harsha of Kashmir (1089-1101 AD), the Damaras became riotous, and he ordered the lord of Mandala to massacre them. ....After having quite depopulated — Madava of the Damaras, the lord of Mandala intended to do the same with Kramarajya, and marched towards it. In despair the Damaras of this place collected an army at Loulaha. They fought a fierce battle, and the lord of Mandala was for a time baffled. But the king, like a Rakshasa, was bent on destroying this beautiful kingdom. [VII (i), p.262]. This shows that the Lol people in the time of Harsha of Kashmir (1089-1101 AD) were inhabitants of Loulaha in Kramarajya.

Thakur Deshraj [11] writes that these people lived in Marwar. They had ruled Nagaur prior to 16th century. Pathans, Mughals etc had occupied the big cities of the region like Nagaur but the Loyal people never paid royalty to them. They ruled their areas under Bhumiachara system. When Akbar (1542 – 1605) became the ruler of Delhi he arrested many Jat sardars after inviting them to Delhi. When this thing came to the notice of Jat chieftain named Tola Sardar who went to Delhi to meet Akbar. Akbar told him to pay the taxes. Tola Sardar replied that take as much of gold coins as can be carried by your mules and leave our brothers. This indicates that Tola was a very rich chieftain. The discussion between Tola and Akbar is recorded in poetic form as follows in Rajasthani Language:

Note - There is a difference of period of Tola Chieftain mentioned in this poem and the Inscription of Tola mentioned below of year 1508 AD. Tola Sardar must be surviving in period of Sikandar Lodi (r.1489–1517) as ruler at Delhi. It may be the earlier Tola was some different person from that of 1508 AD Inscription.

Rajatarangini[12] mentions that Lava was a renowned prince of Kashmir. He had a vast and powerful army under him, and probably carried on many wars with his neighbours. It is said of him that the noise of his army made his people sleepless, but lulled his enemies to long sleep (death). He built the town of Lolora which, it is said, contained no less than eighty-four lacs of stone-built houses. Nothing more is said of him than that he bestowed the village of Lovara in Ledari on Brahmanas before his death. He was succeeded by his son Kusheshaya, who was a powerful prince. He bestowed the village of Kuruhara on Brahmanas.

Rajatarangini[13] tells that in the reign of Harsha of Kashmir (b.1059, ruled. 1089-1101 AD), The Damaras became riotous, and he ordered the lord of Mandala to massacre them. The Damaras inhabiting Madava and Lohara were first attacked and murdered like birds in the nests. Even the Brahmanas who dwelt at Madava were not spared by the destroyer of the Lavanyas (Damaras). Poles were fixed on the place where the Damaras were executed. One wife of a Lavanya was impaled, the rest were terrified, and fled on all sides. Some fled to the country of the Mlechchhas and lived on beef, others took to working wheels at wells. The lord of Mandala sent to the fierce king many garlands made of the heads of the Lavanyas. The gates of the palace was seen filled with Damara heads. Gold, cloth, and other valuable things were kept at the palace-gate, and whoever brought a Damara head obtained one of them from the door as his reward. And the birds lingered at the king's gate to feed on human heads. Wherever the king stopped, the gates were adorned with garlands of Damara heads. The bad smell which arose, and the cry of jackals, made the place appear like the spot assigned for the burning of the dead.

From the tank at Valeraka to Lokapunya, the lord of Mandala erected a row of the impaled Damaras.

After having quite depopulated — Madava of the Damaras, the lord of Mandala intended to do the same with Kramarajya, and marched towards it. In despair the Damaras of this place collected an army at Loulaha. They fought a fierce battle, and the lord of Mandala was for a time baffled. But the king, like a Rakshasa, was bent on destroying this beautiful kingdom. [VII (i), p.262] 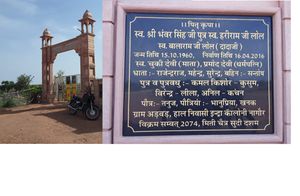 There is an inscription on this pond dated bhadwa sudi 8 samvat 1565 (1508 AD). On this stone there is a statue of Tola Sardar with all five weapons with him. Standing before him is chhadidar or chobadr. Kistana, Dhololav etc are ponds near Khari village, which were constructed by the ancestors of Tola, reflecting the richness of this clan. He had a huge wealth. The capital of Tola sardar was at Khari village in Nagaur pargana. A pond in the west of village was named ‘Torana’ (तोराणा) after him. [17]

We need to identify this Khari village. Our search shows that there are two villages named Khari in Nagaur district.

Their Bhomia and Junjhar are situated in village Khari Karamsotan near Nagaur. Bhomia is offered meat and Junjhar is offered Daliya in Prasada. Tradition tells us that their Junjhar was struggling to get back cows stolen by the enemies and he sacrificed his life at village Bethwasiya.

Distributtion in in Madhya Pradesh