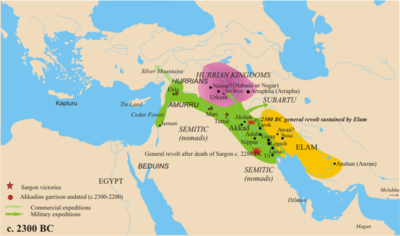 The approximate area of Hurrian settlement in the Middle Bronze Age is shown in purple around 2300 BC.

Hurrians (transliteration: Ḫu-ur-ri) were a people of the Bronze Age Near East.

They spoke a Hurro-Urartian language called Hurrian, and lived in Anatolia and Northern Mesopotamia. The largest and most influential Hurrian nation was the multi-ethnic kingdom of Mitanni, the Mitanni perhaps being Indo-European speakers who formed a ruling class over the Hurrians. The population of the Indo-European-speaking Hittite Empire in Anatolia included a large population of Hurrians, and there is significant Hurrian influence in Hittite mythology. By the Early Iron Age, the Hurrians had been assimilated with other peoples, except perhaps in the kingdom of Urartu. According to a hypothesis by I.M. Diakonoff and S. Starostin, the Hurrian and Urartian languages are related to the Northeast Caucasian languages.

From the 21st century BC to the late 18th century BC, Assyria controlled colonies in Anatolia, and the Hurrians, like the Hattians, adopted the Assyrian Akkadian cuneiform script for their own language about 2000 BCE. Texts in the Hurrian language in cuneiform have been found at Hattusa, Ugarit (Ras Shamra), as well as in one of the longest of the Amarna letters, written by King Tushratta of Mitanni to Pharaoh Amenhotep III. It was the only long Hurrian text known until a multi-tablet collection of literature in Hurrian with a Hittite translation was discovered at Hattusa in 1983.

Urkesh: The Khabur River valley became the heart of the Hurrian lands for a millennium. The first known Hurrian kingdom emerged around the city of Urkesh (modern Tell Mozan) during the third millennium BCE. There is evidence that they were initially allied with the east Semitic Akkadian Empire of Mesopotamia, indicating they had a firm hold on the area by the reign of Naram-Sin of Akkad (ca. 2254–2218 BCE). This region hosted other rich cultures (see Tell Halaf and Tell Brak). The city-state of Urkesh had some powerful neighbors. At some point in the early second millennium BCE, the Northwest Semitic speaking Amorite kingdom of Mari to the south subdued Urkesh and made it a vassal state. In the continuous power struggles over Mesopotamia, another Amorite dynasty had usurped the throne of the Old Assyrian Empire, which had controlled colonies in Hurrian, Hattian and Hittite regions of eastern Anatolia since the 21st century BC. The Assyrians then made themselves masters over Mari and much of north east Amurru (Syria) in the late 19th and early 18th centuries BC. Shubat-Enlil (modern Tell Leilan), was made the capital of this Old Assyrian empire by Shamshi Adad I at the expense of the earlier capital of Assur.

Yamhad: The Hurrians also migrated further west in this period. By 1725 BCE they are found also in parts of northern Syria, such as Alalakh. The mixed Amorite-Hurrian kingdom of Yamhad is recorded as struggling for this area with the early Hittite king Hattusilis I around 1600 BCE. Hurrians also settled in the coastal region of Adaniya in the country of Kizzuwatna, southern Anatolia. Yamhad eventually weakened vis-a-vis the powerful Hittites, but this also opened Anatolia for Hurrian cultural influences. The Hittites were influenced by both the Hurrian and Hattian cultures over the course of several centuries.

Arrapha: Another Hurrian kingdom also benefited from the demise of Babylonian power in the sixteenth century BCE. Hurrians had inhabited the region northeast of the river Tigris, around the modern Kirkuk. This was the kingdom of Arrapha. Excavations at Yorgan Tepe, ancient Nuzi, proved this to be one of the most important sites for our knowledge about the Hurrians. Hurrian kings such as Ithi-Teshup and Ithiya ruled over Arrapha, yet by the mid-fifteenth century BCE they had become vassals of the Great King of Mitanni. The kingdom of Arrapha itself was destroyed by the Assyrians in the mid 14th century BCE and thereafter became an Assyrian city.

Bronze Age collapse: By the thirteenth century BC all of the Hurrian states had been vanquished by other peoples, with the Mitanni kingdom destroyed by Assyria. The heartlands of the Hurrians, the Khabur river valley and south eastern Anatolia, became provinces of the Middle Assyrian Empire (1366 - 1020 BC) which came to rule much of the Near East and Asia Minor. It is not clear what happened to these early Hurrian people at the end of the Bronze Age. Some scholars have suggested that Hurrians lived on in the country of Nairi north of Assyria during the early Iron Age, before this too was conquered by Assyria. The Hurrian population of northern Syria in the following centuries seems to have given up their language in favor of the Assyrian dialect of Akkadian, and later, Aramaic.

Urartu: However, a power vacuum was to allow a new and powerful Hurrian state whose rulers spoke Urartian, similar to old Hurrian, to arise. The Middle Assyrian Empire, after destroying the Hurri-Mitanni Empire, the Hittite Empire, defeating the Phrygians and Elamites, conquering Babylon, the Arameans of Syria, northern Ancient Iran and Canaan and forcing the Egyptians out of much of the near east, itself went into a century of relative decline from the latter part of the 11th century BC. The Urartians were thus able to impose themselves around Lake Van and Mount Ararat, forming the powerful Kingdom of Urartu. During the 11th and 10th centuries BC, the kingdom eventually encompassed a region stretching from the Caucasus Mountains in the north, to the borders of northern Assyria and northern Ancient Iran in the south, and controlled much of eastern Anatolia.

Assyria began to once more expand from circa. 935 BC, and Urartu and Assyria became fierce rivals. Urartu successfully repelled Assyrian expansionism for a time, however from the 9th to 7th century BC it progressively lost territory to Assyria. It was to survive until the 7th century BCE, by which time it was conquered fully into the Neo Assyrian Empire (911 - 605 BCE).

The Assyrian Empire collapsed from 620 to 605 BCE, after a series of brutal internal civil wars weakened it to such an extent that a coalition of its former vassals; the Medes, Persians, Babylonians, Chaldeans, Scythians and Cimmerians were able to attack and gradually destroy it.

Urartu was ravaged by marauding Indo-European speaking Scythian and Cimmerian raiders during this time, with its vassal king (together with the king of neighbouring Lydia) vainly pleading with the beleaguered Assyrian king for help. After the fall of Assyria, Urartu came under the control of the Median Empire and then its successor Persian Empire during the 6th century BCE. During the late 6th century BCE a new wave of Indo-European speakers migrated over the Caucasus into Urartian lands, these being the Armenians, and the region became part of the Armenian Orontid Dynasty. The Hurri-Urartians seem to have disappeared from history after this, almost certainly being absorbed into the Indo-European Armenian population.

In Bhisma Parva, Mahabharata/Book VI Chapter 9 shloka 15, Sanjaya narrates the names of all the Varshas, and of all the mountains, and also of all those that dwell on those mountains. Sanjaya tells that on the south of Sweta and the north of Nishadha, is the Varsha, called Romanaka. ... On the north of the milky ocean, the Lord Hari of unlimited puissance dwelleth on his car made of gold. [6]

They have been mentioned in Shalya Parva, Mahabharata/Book IX Chapter 44 shloka 56. It mentions various clans who joined the ceremony for investing Kartikeya with the status of generalissimo. Jati (Guti) and Hari along with many Jat clans appear in this. [7]

Aswamedha Parva, Mahabharata/Book 14 Chapter 8 mentions that there is a peak named Munjaban on the summits of the Himalaya mountains, where the adorable Lord of Uma (Mahadeva) is constantly engaged in austere devotional exercises. On all sides of that mountain, there exist mines of gold, the attendants of Kuvera, desirous of doing good to him, protect these mines of gold from intruders. In this Hari is mentioned along with Moond and Bhaskar Jat clans. [8]