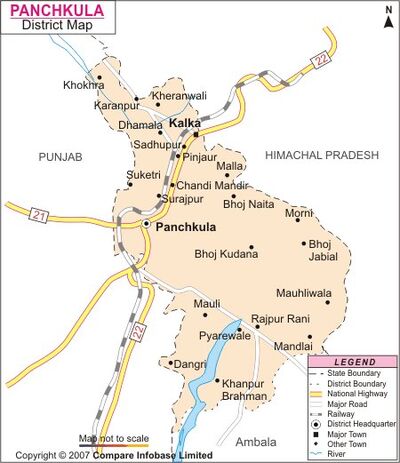 Kalka (Kaleka) is a town and tahsil in Panchkula district in Haryana. Its ancient name was Kalakuta (कालकूट).

Kalakuta (कलकूट) is mentioned by Panini in Ashtadhyayi. [1]

Kalakuta (कालकूट) is mentioned by Panini in Ashtadhyayi. [2]

V. S. Agrawala[4] writes that Ashtadhyayi of Panini mentions janapada Kalakūṭa (कलकूट)/(कालकूट) (IV.1.173) - Sabhaparva calls it Kālakūṭa (कालकूट) and makes it a part of Kulinda conquered by Arjuna. Panini's Kuluna seems to be same as Kulinda and later Kuṇinda. Kulinda (Greek: Kulindrini was known to Ptolemy as an extensive country including the region of lofty mountains wherein the Beas, the Satluj, the Yamuna and Ganga had their sources. The Kalakūṭa lay some where in this area, with possible traces of its name in modern Kalka in Simla Hills.

People who came from the side of Kalakuta (कालकूट) mountain were known as Kaler - Jat Gotra.[5]

Lepel H. Griffin[6] writes: Three years later the district of Sanawar was conquered for Ala Singh by one of his Sirdars, Gurbaksh Singh Kaleka. The district was known as Chaurasi, (eighty-four) from the number of its villages, one of which was Pattiala, now the capital of the territory, where Ala Singh, in the year 1753, built a mud fort in order to overawe his new possessions, and left Sirdar Gurbaksh Singh in charge. Diwan Lachman Narain, one of the officers of Samand Khan or Abul Samad Khan of Sirhind

fled to this Chief for protection, and his surrender was at once demanded by his master, who, being refused, marched to Sanawar to enforce his demand. Sirdar Gurbaksh Singh then sent the Diwan to Pattiala, as being a place of greater security, and, joining the force of Ala Singh, they together attacked Abul Samad Khan and defeated him, securing a large quantity of plunder.

And for this reason the land of the five rivers, and the whole of the region called Kuru-jangala, and the forest of Rohitaka which was uniformly wild, and Ahichhatra and Kalakuta, and the banks of the Ganga River, and Varana River, and Vatadhana, and the hill tracts on the border of the Yamuna--the whole of this extensive tract--full of abundant corn and wealth, was entirely overspread with the army of the Kauravas.