It is situated at 122 kms on the Delhi-Jaipur highway.

It is the site of 14th century Hill-Fort, Kesroli that is the oldest heritage site. Historians trace it to the Matsya Janapada of the Mahabharata times. In Kesroli one gets to see the oldest remains of Buddhist Vihara at Viratnagar where the Pandavas spent the last year of their exile incognito; Pandupole, with the only reclining statue oh Humanyun; the samadhi of the ruler saint Bhartrihari and Talavriksha with ancient water reservoirs. 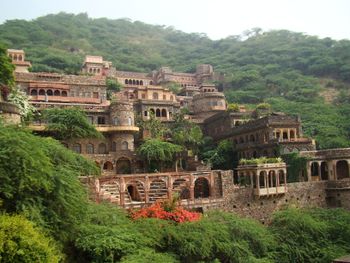 The fort Sited atop the rare, dark Hornstone Breccia rocks, commands splendid agrarian views from its ramparts, which rise to 50-65 meters. The origins of the Fort Kesroli are traced back to over six centuries. It is reputed to have been built by the Yaduvanshis, descendants of Lord Krishna, who converted to Islam in the mid-14th century to be called Khanzadas. It subsequently changed hands, being conquered by the Mughals and the Jats before reverting to the Rajputs in 1775 when the princely state of Alwar was founded.

Located in the heart of the 'golden triangle'. Kesroli is almost equidistant from the tourist sites of Delhi, Agra and Jaipur. It makes an ideal base to visit the Sariska tiger sanctuary, Kankwadi fort, Neelkanth Temples, Pandupol, the monuments of Tijara, Siliserh Lake, Jaisamand Lake, Bhangarh-Ajabgarh, the hot springs in Talvriksh, Rajgarh, Machari, Viratnagar, Deeg, the sanctuary in Bharatpur, the Jat mud fort of Govindgarh, the ancient city of Mathura and its renowned museum.

H.A. Rose[1] writes that In Hissar the true Chauhans are immigrants and may be divided into two branches, the Nimrana* and Sidhmukh or, as they call themselves, Bārā Thāl. The Nimranas who are descendants of Raja Sangāt, a great-grandson of Chahir Deo, brother of Pirthi Raj, are sub-divided into two clans, Rāth and Bāgauta, both of which came from Gurgaon, the former tracing their origin to Jātsāna. The name Bagauta would appear to be connected with Bighota.†

The Bārā Thāl had a group of 12 villages near Sidhmukh in Bikaner, close to a famous shrine of Guga.