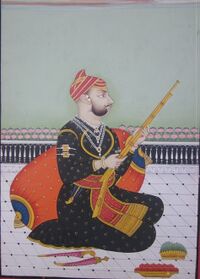 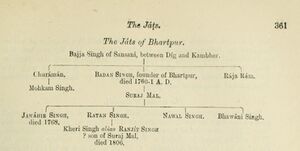 Maharaja Nawal Singh (महाराजा नवल सिंह, भरतपुर) was son of Maharaja Suraj Mal. He became the ruler of Princely State of Bharatpur after the untimely demise of the ruling Prince, Maharaja Kehri Singh, in 1771. He ruled from 1771 to 1776. After his death in 1776 he was succeeded by his brother Maharaja Ranjit Singh, who ruled over Bharatpur from 1776 to 1805.

Nawal Singh, third son of Surajmal, succeeded his brother by right as regent. But his younger brother, Ranjit Singh, ambitious to rule, threw himself into the arms of Mirza Najaf Khan, then wielding the supreme power of the Mogul, and invited him to espouse his cause. The Mirza did so, and took possession of Agra. But called away immediately afterwards into Rohilkhand, Namal Singh, taking heart, determined to carry the war into the enemy's country. He therefore marched on Delhi and occupied Sikunderabad. Attacked, and repulsed thence, he retired, only however to make a second onward movement, reinforced by the trained mercenaries of Samru. They had reached Hodal, a town sixty miles south of Delhi, when they were attacked and dislodged by Mirza Najaf Khan, who had returned for the purpose, accompanied by Ranjit Singh. Nawal Singh and Samru then retired, first on Kotban and ultimately on the fortress of Dig, followed by the Mirza. The latter, finding Dig extremely strong, enticed the Jats to Barsana, where he attacked and completely defeated them. Dig resisted for a twelvemonth before it was captured.[1]

Jwala Sahai[2] writes....In 1773 Najaf Khan reduced the Agra fort and in 1774, while meditating a campaign against Bharatpur was urgently summoned to Ruhelkhand. Encouraged by his absence Nawal Singh advanced upon Delhi and occupied Sikandrabad with 10,000 horse. The force at Delhi was insufficient to resist

[p.30]: but detecting conspiracy among his own followers Nawal Singh was obliged to make a retreat.

Reinforced by regulars and guns under Sumru, Nawal Singh again marched upon Delhi shortly after, but by this time Najaf Khan had returned from Ruhelkhand. Accompanied by Ranjit Singh, Hira Singh, Raja of Ballabhgarh and Najaf Kuli Khan, Najaf Khan advanced to oppose him after the reigns of 1774. Dislodged from Hodal Nawal Singh took up a position in the fortified village of Kotban where the Mirza endeavoured to blockade him. After amusing him with skirmishes for a fortnight Nawal Singh again fell back on Dig which was besieged by the Mirza. In the meantime a pitched battle was fought at Barsana where the Jats charged desperately and a momentary confusion was caused by the Mirza himself being wounded; but at last the imperialists overcame and the resistance of Sumru's disciplined troops served only to cover Nawal Singh's retreat with a show of order. Such was, however,the strength and resolution of the Jats that strictest blockade proved fruitless for 14 months to March 1776 at the end of which the fort Was reduced and the garrison escaped to the neighboring castle of Kumher. The Mirza took possession of the fort with vast quantity of ammunition and stores, a train of artillery, silver plates, stately equipage and ornaments and chests containing Rs. 6,00,000 cash. He built a Masjid adjoining Lachmanji's temple in Jawaharganj and his troops committed all sorts of violence on the helpless inhabitants including, the demolition of their temples and idols therein.

[3] mentions....Raja Nawal Singh paid dearly for his folly in rekindling the

[p.162]: flames of war which did not subside even after consuming him to death. In spite of many disasters and defeats the Jat chief was as obdurate as ever. The victorious Mughal army has thundering before the gates of Deeg, demanding his submission or a fight to the end. But Nawal Singh coolly refused both. Fond hope whispered in his ear that he need not yet despair of success, Abdul Ahad Khan tried what diplomacy and intrigue could to baffle or divert the arms of Mirza Najaf Khan. He was instigating the Marathas5 to crush timely the formidable power of the Mirza - the more dangerous to their national safety on account of his alliance with the English who supported the pretensions of Raghoba. In the Deccan the battle of Arras had been fought (18th May, 1775), the issue of which was not very encouraging to the patrons of the usurper. Nawal Singh was heartened by the prospect of a Maratha invasion of. Hindustan after the rainy season which would surely compel the Mirza to retire from the Jat country. More hopeful was the news of an alliance of Zabita Khan with the Sikhs and their joint attack upon the imperial territories. The son of Najib-ud-daula looked upon the office of Amir-ul-umra and all the territories around Delhi as a part of his heritage from which Mirza Najaf Khan and the Marathas had ousted him under the pretence of restoring the authority of the Emperor. He aspired to play the dictator at the imperial Court like his father; the Ruhela confederacy having disappeared he relied on the Sikhs who were to be pitted against the Marathas. The Sikhs plundered and burnt Paharganj (the western suburb of Delhi between Qadam Sharif and Raisina), and the Ruhela chief himself was ravaging the Doab. The situation was menacing enough to create grave anxiety in the mind of the Emperor, who wrote to Nawab Asaf-ud-daula6 for help against the rebels. Mirza Najaf Khan refused to move leaving a half-conquered enemy to insult his rear and resolved not to turn his back upon Deeg without capturing it. God spared the Jat chief the mortification of witnessing the inevitable doom of his

[p.163]: country and people. Raja Nawal Singh, who seem to have vowed not to die on the battle-field, was happy enough to breathe his last on a sick-bed, two gharis after sunset on Thursday, 10th August,7 1775. He was sickly in constitution, cowardly in action and rash in speculation. He Was obstinate on the wrong side of it and brave in everything except what concerned his personal safety. As a soldier and patriot he was of the type of Demosthenes who could deliver Philippics at the forum of Athens, without courage to bear the sight of Philip's phalanx on the field of Charonea. Though he had disappointed his officers and troops at critical moments by his nervous timidity, they never ceased to believe that he would behave better next time. "He did not possess much administrative ability and generalship."s 8Nevertheless, he was loved by his people for his amiable virtues and generosity, and his death was sincerely mourned by all of them.