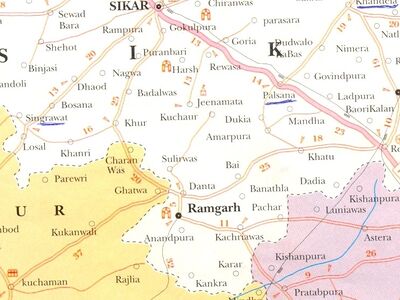 Location of Sami in north of Khur in Sikar district

It is located 4 km in north of Khur and east of Khanri.

There is an inscription of the year s.v.1485 (1428 AD) of a Ranwa warrior named Malashi in village Sami at Shiva temple.

The book Arabic, Persian and Urdu Inscriptions of West India by Dr. Ziyaud-Din Abdul-Hayy Desai provides a comprehensive list of more than 2,000 inscriptions from West Indian states. This book mentions about the Inscription of Sami at At S.No. 254.[2]

There is one village Sami in Tharparkar district of Sindh in Pakistan.[3]