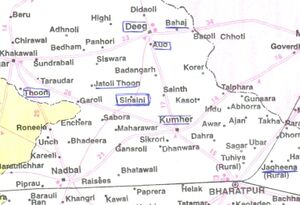 Location of Thoon in Bharatpur district

Churaman (1695 – 1721) (चूड़ामण) was Zamindar of Sinsini and the real founder of Jat state of Bharatpur in Rajasthan, India. He was son of Bhajja Singh and younger brother of Raja Ram. He was the first unanimously elected leader of Jats in 1695. He made Jats a political power in India.

In 1702 after the death of Bhajja Singh, Churaman came on front. Within a short period Churaman gathered 500 horse riders and thousands of soldiers. Nand Ram, the Zamindar of Hathras, also joined him along with 100 horse riders. Churaman recruited the famous brigand of Mendoo and Mursan in his army. He constructed a fort at place known as ‘Thoon’ at a distance of 150 km in west of Agra. Within a short span, there were 80 villages under the Thoon state. There was an army of 14 – 15 thousands.

Rise of Jat states from ashes of Thoon

On 18 November 1722 the Rajput Mughal combined army besieged the Thoon fort of Mohkam Singh, took it and got it ploughed by Ashes. Thus the Jat state of Badan Singh rose from the ashes of Thoon, Jatauli and other forts.

After the fall of Thoon and Jatauli, Badan Singh became formally a samant of Jaipur Darbar on 23 November 1722. Jai Singh in exchange honoured Badan Singh with the title of ‘Brijraj’ i.e. the king of Brij. He was permitted the use of ‘Nagara’, ‘Nishan’ and ‘Pachrang flag’ and gave the Kotwali of Agra. Besides, he was also given the Jagirs of Mathura, Vrindavan, Mahavan, Hisar, Chhata, Kosi and Hodal parganas for revenue of Rs. 50-60 lakh.