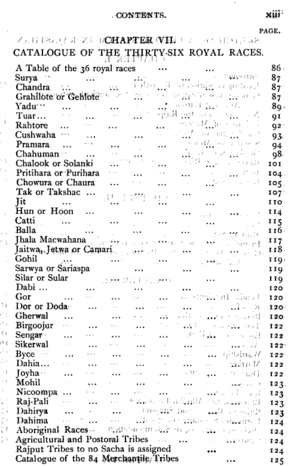 Royal races is a listing of Indian social groups purported to be the ruling clans of several states and Janapads spread over northern Indian subcontinent. Among the historical attempts at creating a comprehensive listing of the 36 are the Kumarapala Prabandha of Acharya Jinamandan Gani [1]of 1435 AD,[2][3] Prithviraj Raso of uncertain date, and Colonel James Tod, writing [Annals and Antiquities of Rajasthan] in 1829.

The Kumarpal Prabandh list gives 36 clans.[4][5] It starts with dynasties mentioned in the classics,

It mentions some of the famous clans:

Many of the names are less known. Notably, it includes the

The list given in Prithviraj Raso has most of the names given in Kumarapala Prabandha, approximately in the same order. Notably it adds

A listing of the 36 was attempted by Tod in his 1829 work Annals and Antiquities of Rajasthan (volume 1). The "races" are further subdivided into 157 branches ( i.e. sakhas), and genealogical, cultural, and geographic information given for each, though some of the sakhas are extinct.[9]

Each sakha has its Gotracharya of genealogical creed describing the characteristics, religious practices, and the locale of the clan.[10] Agrarian martial communities like Ahirs (Yadav), Jats and Gurjars were also included in this list by Tod.[11]

Tod's list is to be found on page xiii (1899 printing) of his 1829 work: The annals and antiquities of Rajasthan: or the central and western Rajpoot states of India.[12]

The Jats were designated by the British Imperial Government as a Martial Race. Martial Races were races and peoples that were naturally warlike and aggressive in battle, and possessed qualities like courage, loyalty, self sufficiency, physical strength, resilience, orderliness, hard working, fighting tenacity and military strategy. The British Empire recruited heavily from these Martial Races for service in their Armies. A strategy that is still used today (21st century) in Armies of South Asian countries e.g. The famous Jat Regiment & the Gurkhas.

Col. James Tod notes that The Jats hold place amongst the 36 royal races of ancient India.[13][14][15] S. Jabir Raza notes that the Jats, during ancient period, were known as the Jits. The Persian form of the ancient term Jit is Jatt (जट्ट) with short vowel and double short ‘t’.[16]

36 Royal Races as mentioned by Tod are:

Back to General Historical Articles