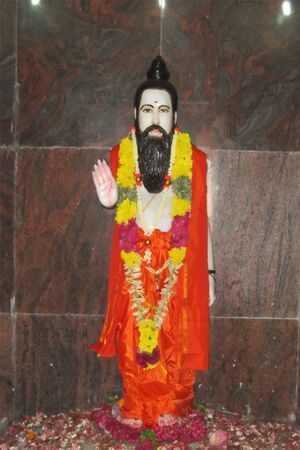 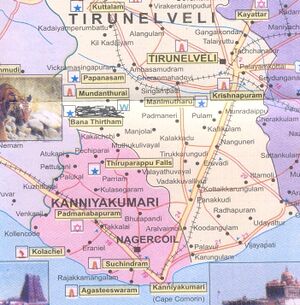 Agastya (महर्षि अगस्त्य) is a legendary Vedic sage or rishi. Skanda Purana gives details of journey of Sage Agastya and his wife Lopamudra from Kashi to south, minimizing size of Vindhya mountains, going to the mountain called Sri Shail, and climbing up Lohit mountain where they found Lord Kartikeya.

Some say that it was the sage Agastya who first brought and popularized the Vedic religion to south India. Agastya and his clan are also credited to have "authored" many mantras of the Rig Veda, the earliest and most revered Hindu scripture, in the sense of first having the mantras revealed in his mind by the Supreme Brahman.

In some reckonings, Agastya is the greatest of the Seven Sages or Saptarshis. The word is also written as Agasti. A-ga means a mountain, Asti, thrower. Also a name of Lord Shiva. Agastya the Rishi, was born of both Gods, Mitra and Varuna, from Urvashi.

Agastya is also the Indian astronomical name of the star of Canopus, is said to be the 'cleanser of waters', since its rising (February) precedes the calming of the waters of Indian Ocean. Other reference is in Mahabharata in Sauptikaparva as the teacher of the teacher of Guru Drona, who gave Drona, the greatest of weapons, Brahmastra (used by both Arjuna and Ashwatthama at the end of the war).

Skanda Purana says that the Vindhya mountains that separate north and south India from each other once showed a tendency to grow so high as to obstruct the usual trajectory of the sun. The need arose to subdue, by guile, the Vindhyas, and Agastya was chosen to do that.

Agastya journeyed from northern solstice to southern solstice, and on the way encountered the now impassable Vindhya mountains. He asked the mountain range to facilitate his passage across to the south. In reverence for so eminent a sage as Agastya, the Vindhya mountains bent low enough to enable the sage and his family to cross over and enter south India. The Vindhya range also promised not to increase in height until Agastya and his family returned to the northern solstice. Agastya settled permanently in the south, and the Vindhya range, true to its word, never grew further. Thus, Agastya accomplished by guile something that would have been impossible to accomplish by force. Ramayana covers this astronomical correction made by Rishi Agastya. It is from here that the science of Vastu Shastra originated.

Agasthiyar Falls (also called Papanasam Falls) is located close to Papanasam in Tirunelveli district in the South Indian state of Tamil Nadu. The falls is located on the Western Ghats and to the south of Papanasam lower, the lake from where Tamiraparani River originates. It is located 42 km from the nearest city Tirunelveli. As per Hindu legend, it is the place where sage Agasthya got a view of Shiva in his marriage costume.

Nahusha (नहुष) or Nahush (नहुष) was son of Ayu, the eldest of Pururavas, and father of Yayati. This king is mentioned by Manu as having come into conflict with the Brahmans, and his story is repeated several times with variations in different parts of the Mahabharata as well as in the Puranas. According to Manu "By sacrifices, austere fervour, sacred study, self-restraint, and valour, Nahusha acquired the undisturbed sovereignty of the three worlds. Through want of virtuous humility the great king Nahusha was utterly ruined".

One version of the story says that he aspired to the possession of Indrani, wife of Indra, when that god had concealed himself for having killed a Brahman. A thousand great Rishis bore the car of Nahusha through the air, and on one occasion he touched with his foot the great Agastya, who carrying him. The sage in his anger cried out, "Fall, thy serpent," and Nahusha fell from his glorious car and became a serpent.

Agastya, at the supplication of Nahusha, put a limit to the curse; and according to one version, the doomed man was released from it by the instrumentality of Yudhisthira, when he threw off "his huge reptile form, became clothed in a celestial body, and ascended to heaven."

Varahamihira mentions Mana (मान) and Hala (हाल) together in his Brihat Samhita the name of a people [1] But these are two different clan names the Mana and the Hala / Hala . The Mana are separately mentioned as a people in Markandeya Purana and so are the Hala and their country in the North. [2] Mana was also supposed to be the name of Agastya’s father; and consequently his family is called Mana. [3]

Ramayana Kishkindha Kand Sarg 41 mentions about the directions to southward search party prepared by Sugriva under the leadership of Angad, in which several important Vanar were included - Neel, Hanuman, Jamvanta, Suhotra, Shararita, Shargulma, Gaja, Gavaksha etc. and told them about the impassable countries and difficult path and said ....

Next you will see Kunjar Parvat. Here Vishwakarmaa built a place for Agastya Muni. This place is one Yojan wide and 10 Yojan high. Here there is Bhogvati city where snakes live, that is why it is impossible for human beings to go there. Here lives the king of snakes - Vasuki Naga. Many terrific snakes guard him. This place is studded in numerous gem stones. Go in this place very carefully and search for Seetaa. This has been mentioned in shlokas 34 to 38 as under:

Ramayana in Aranya Kanda Sarga 15 mentions about Panchavati situated on Godavari River in Nasik district in Maharashtra. The biodiversity of the place is very beautifully described from shlokas 12-18 as under:

12, 13a. This River Godavari is also seen from here, surrounded by blooming trees, spread over with swans, and beautified with kaarandava, and chakravaaka birds, as that contemplated soul sage Agastya had said. [3-15-12]

Kishkindha Kanda Sarga 41 mentions about the Mountain called Agastyamalai and it is in Western Ghats from which River Tamraparni emerges.

15b, 16a. "You shall see the eminent sage Agastya, whose resplendence is akin to that of the Sun, and who will be sitting on the top of that highly resplendent Mt. Malaya. [4-41-15b, 16a]

16b, 17a. "And when that great-souled Agastya complaisantly permits you, then you shall leave that mountain and cross over the great River Taamraparni, a highly cherished river of crocodiles. [4-41-16b, 17a]

10. But when Sunda is eliminated by sage Agastya's curse, she that Tataka wished to retaliate that eminent sage along with her son Mareecha. [1-25-10]

11, 12a. With desperation brewing in her she roaringly rushed towards the sage as though to eat him away, and on seeing her rushing along with her son Mareecha towards him, the godly saint Agastya firstly cursed Mareecha saying, 'you will attain demon-hood.' [1-25-11, 12a]

12b, 13. Highly infuriated sage Agastya even cursed Tataka saying, 'forthwith divested of this form of a beautiful female, oh, great yakshii, you shall become a man eater with your form distorted, face contorted, and shape monstrous. [1-25-12b, 13]

14. Frenzied by the curse and convulsed in fury she that Tataka is thus vandalising this auspicious province, in which sage Agastya once sauntered. [1-25-14]

Aranya Kanda/Aranya Kanda Sarga 11 mentions the Stories of Sages Mandakarani and Agastya - Rama comes across lake from which divine music is heard. Surprised at the musical notes from beneath the waters of the lake he enquires with the sage who is following, and that sage narrates the episode of Sage Mandakarni. Then Rama proceeds on wondering at that lake, and he visits all the hermitages about there and thus elapsed are ten years. Again Rama returns to the hermitage of Sage Suteekhsna (सुतीक्ष्ण), and after staying there for some time, takes leave of that sage and proceeds to see Sage Agastya. And on the way he visits the brother of Sage Agastya also. Rama, on the way narrates about the great deeds done by Sage Agastya in protecting humans from demons, and also depicts the propitious nature of Agastya’s hermitage.

Anusasana Parva/Book XIII Chapter 67 mentions....Bhishma's narration to Yudhishthira of the discourse that took place in ancient times between a Brahmana and Yama. Agastya (अगस्त्य) is mentioned in Mahabharata (XIII.67.6).[5]....Go thou to the town inhabited by Brahmanas and bring hither the person known by the name of Sharmina and belonging by birth to the race of Agastya. He is intent on mental tranquillity and possessed of learning. He is a preceptor engaged in teaching the Vedas and his practices are well-known.

Vana Parva, Mahabharata/Book III Chapter 130 mentions tirthas where people come to die to get place in heaven. Agastya Tirtha (अगस्त्य तीर्थ) is mentioned in Mahabharata (III.130.6).[7].....O conqueror of foes, here is that sacred spot known by the name of Sindhu--where Lopamudra accepted the great sage Agastya as her lord and,

Vana Parva, Mahabharata/Book III Chapter 85 mentions sacred asylums, tirthas, mountans and regions of eastern country. Agastya Ashrama (अगस्त्य आश्रम) (Tirtha) is mentioned in Mahabharata (III.85.15).[8]..........O chief of the Bharata race, that the place hath come to be called Prayaga (प्रयाग) (III.85.14). In this direction, O foremost of kings, lieth the excellent asylum of Agastya (अगस्त्य) (III.85.15), O monarch, and the forest called Tapasa, decked by many ascetics. And there also is the great tirtha called Hiranyavindu (हिरण्यबिन्दु) (III.85.15) on the Kalanjara (कालंजर) (III.85.15) hills, and that best of mountains called Agastya, which is beautiful, sacred and auspicious.